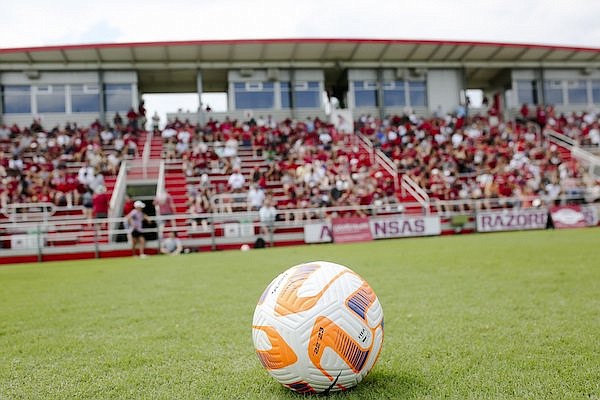 A soccer ball sits on the field during a game between Arkansas and Arkansas State on Sunday, Aug. 28, 2022, in Fayetteville.

Ellie Podojil scored a game-tying goal in the 83rd minute and Arkansas’ soccer team finished with a 3-3 draw at No. 13 BYU on Thursday.

Podojil’s goal to a vacated net came after BYU goalkeeper Savanna Mason jumped outside the 6-yard box to deflect an entry pass from near midfield. Mason was unable to handle the ball, which bounced to Podojil about 16 yards in front of the goal.

Arkansas missed on other scoring chances late in the game, notably a good look by Ava Tankersley that was deflected by Mason in the 89th minute. BYU out-shot the Razorbacks 19-9.

The teams combined for five goals over a 25-minute span in the first half. Arkansas’ Jessica De Filippo began the scoring flurry in the 11th minute with an assist from Anna Podojil.

After BYU tied in the 15th minute, the Razorbacks answered with a goal by Anna Podojil three minutes later to regain a 2-1 lead.

The goal was the 39th of Anna Podojil’s career, which passed Ruthie Miller for third on the all-time goals list at Arkansas. Anna Podojil, Ellie's older sister, is five goals shy of tying the program record for goals scored.

The Cougars tied again, 2-2, on Bella Folino’s goal in the 21st minute. BYU took a 3-2 halftime lead when Sierra Pennock scored in the 36th minute.

Mason had saves on 2 of 5 attempts for BYU. Arkansas goalkeeper Grace Barbara had 4 saves in 7 shots on goal.

The Razorbacks (4-1-1) are scheduled to play Sunday at Grand Canyon in their final non-conference game.

BYU, last year’s national runner-up, is 3-1-2 and winless against SEC teams. The Cougars were upset by Alabama last Thursday on their home field in Provo, Utah.