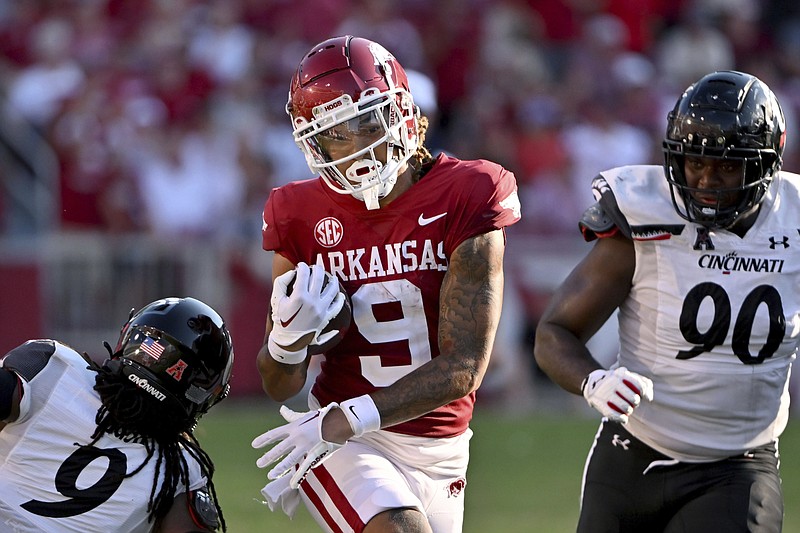 Arkansas wide receiver Jadon Haselwood (9) runs for a gain against Cincinnati during the second half of an NCAA college football game Saturday, Sept. 3, 2022, in Fayetteville, Ark. (AP Photo/Michael Woods)

FAYETTEVILLE — A year after wide receiver Jadon Haselwood and quarterback Spencer Rattler connected on two touchdown passes in Oklahoma’s 76-0 victory over Western Carolina, they’ll be on the same field today.

But on opposite sidelines.

Haselwood is now playing for the University of Arkansas and Rattler for South Carolina, teams which meet in the SEC opener at Reynolds Razorback Stadium.

Adding to the Oklahoma connection is Gamecocks Coach Shane Beamer, the Sooners’ special teams coordinator and tight ends coach from 2018-20.

“They’re both some competitive guys,” said Haselwood, a junior from Ellenwood, Ga. “I liked Coach Beamer. He was a great coach when I was there. I can’t wait to have a face-off with him.”

Beamer said watching game tape of Haselwood’s debut with Arkansas last week reminded him of the player he knew at Oklahoma.

“I think a lot of him,” Beamer said. “When I say he’s got that dog mentality in him That is a compliment.

“He is a competitor and you see it on tape.”

Haselwood, 6-3 and 213 pounds, had three receptions for 42 yards in Arkansas’ 31-24 victory over Cincinnati, including a 19-yard touchdown pass from KJ Jefferson between three defenders on a third-and-7 play.

“He just out-competed the guys from Cincinnati,” Beamer said.

The touchdown gave Arkansas a 21-7 lead in the third quarter.

“You can tell KJ believes in him because he kind of threw it up in a crowd,” Razorbacks Coach Sam Pittman said. “And it was a great pass, don’t get me wrong. Only [Haselwood] could catch it, but KJ has great confidence in him and he went and got it.

“So I anticipate him just getting better and better as his confidence and his knowledge of exactly where to be at what time on the field increases. I think he’s going to have a really, really good year as I felt like he played a good game blocking, running and receiving.”

When Haselwood came down with Jefferson’s pass on a back-shoulder catch in the end zone, the three Bearcats trying to cover him were sprawled on the field like bowling pins that had been knocked over.

“Oh, it was just trust,” Haselwood said when asked to describe the play. “I mean, I’ve done it before. I’ve made crazy catches.

“I don’t know how I do it. It’s just a blessing from God, to be honest. And it’s really just [Jefferson] being comfortable, giving me the opportunity, and I’ve got to make do with any opportunity.

“Ain’t no telling when it’s going to come back, so you’ve got to make it count.”

Haselwood went through spring practice at Arkansas, then worked with Jefferson over the summer to continue building their chemistry in the passing game.

“Him and KJ are like the two most confident guys I know going on the field,” Arkansas senior center Ricky Stromberg said. “[Haselwood’s] a great teammate, he’s a great leader and we’re definitely happy to have him here for sure.”

“That’s my guy,” Smith said in training camp. “I love being around him.

The Arkansas-Cincinnati game drew an announced crowd of 74,751 — the same type of home atmosphere Haselwood enjoyed at Oklahoma’s Owen Field.

“The environment was amazing,” Haselwood said. “Obviously, it’s something I’m used to, and I hope it gets better and better every week.”

Arkansas cornerback Hudson Clark has gone against Haselwood in practice.

“I think he’s brought kind of a confidence and swag to him,” Clark said. “He’s not afraid to go up and get it, not afraid to talk trash when he gets it.

“I just love that about him. I love how competitive he is.

“He gets open and he wants the ball. I really like that about him, and I think he’s going to be a real big piece for us this year.”

South Carolina defensive coordinator Clayton White said he’s looking forward to the matchup between Haselwood and his cornerbacks and safeties.

“He’s a good player,” White said. ‘Unfortunately, he had a difficult time at Oklahoma. But as far as matchup-wise, I think our DBs love challenges and I’m pretty sure I know [the Razorbacks] do as well.

“I want to do a great job of giving our guys help. They’ve got to know where their help is at, knowing you can’t leave him out to dry the entire game. But I think those will be great matchups out there.”

Haselwood said he believed the Cincinnati game was a good start for Arkansas’ offense.

“I feel like we made kind of a statement, and I feel like we’ve got more in the tank,” he said. “Not satisfied.”

Haselwood led Oklahoma with 39 catches and six touchdowns last season, but his 399 yards were an average of 10.3 per catch.

Haselwood had 53 catches for 1,032 yards as a high school senior.