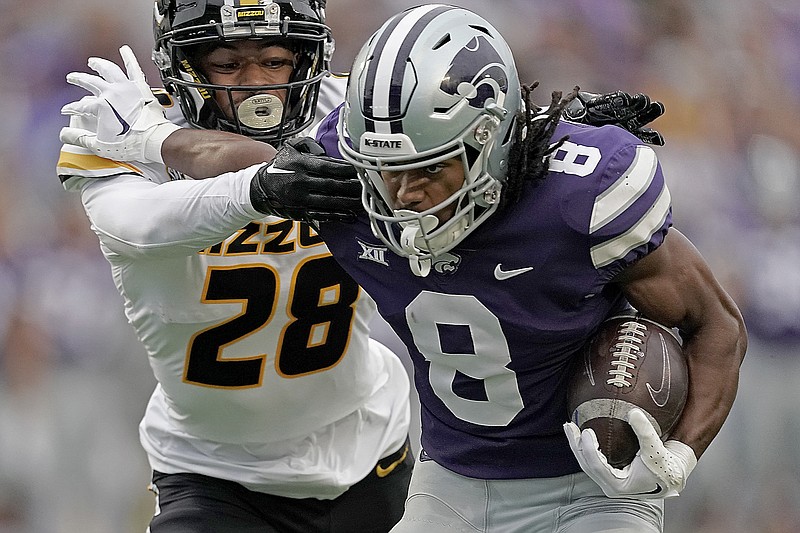 MANHATTAN, Kan. — The century-old rivalry between Kansas State and Missouri still means something in Big 12 country, more than a decade after the Tigers bolted the league for the SEC, and that was evident this week when Wildcats coach Chris Klieman asked players who grew up across the border to talk about it.

One that addressed the team was Phillip Brooks, who grew up near Kansas City and dreamed of wearing black and gold.

“I didn't work out,” he said Saturday, “so I had this one circled on my calendar.”

Brooks made the most of his chance against the Tigers, too. He returned a punt 76 yards for a score, helping the Wildcats lay a 40-12 beating through a driving rainstorm on their longtime rival in their first meeting since 2011.

Deuce Vaughn added 145 yards rushing and two touchdowns, Adrian Martinez threw for 101 yards and ran for a score, and the Kansas State defense picked off Missouri on four straight possessions in the second half to seal the win.

“The landscape of college football is changing. Kansas State wants to be part of the haves,” Klieman said. “Wins like this elevate you among the haves. We have a good football team, but we have a lot of guys with chips on their shoulder.”

That was especially evident on defense.

The Wildcats (2-0) picked off Brady Cook twice in the second half, then did the same to backup Jack Abraham, before Tigers coach Eli Drinkwitz put his starter back in for the fourth quarter. But by that point, the Wildcats had extended their lead to 33-6 and the only drama left was whether they would keep the Tigers (1-1) out of the end zone.

The Tigers finally got in on the game's final play, thanks to a series of timeouts and an untimed down following a penalty.

“One game doesn't define the season. How we respond will,” Drinkwitz said. “There's going to be a lot of negative thoughts and opinions out there about it, but this team has to stay together.”

Cook finished 15 of 27 for 128 yards while Abraham missed all three of his throws — unless you count the two caught by the Wildcats. Cook did have 56 yards rushing, but a good chunk of that came while running from pressure.

The game began under light rain that soon turned into a driving storm, making things seem even worse for the Tigers. They drove for a field goal to open the game, then punted four straight times; three of those were three-and-outs.

Meanwhile, the Kansas State offense plugged along with ruthless efficiency.

Martinez led a 75-yard march following Harrison Mevis' field goal, and Vaughn barreled in from just outside the goal line to give the Wildcats a 7-3 lead. Then it was Martinez who capped the next drive with a 16-yard run, though it took a big block by the pint-sized Vaughn on Missouri safety Jaylon Carlies to spring him to the end zone.

Nothing got better for the Tigers during the hour-long lightning delay.

They ran one offensive play before punting to Brooks, who fielded it cleanly and made the first defender miss. Then, the speedster raced to the Kansas State sideline, bent upfield and saw nobody standing between him and the endzone.

They slowed down offensively in the second half, when penalties kept spoiling drives and Chris Tennant's kicking woes continued with a short miss. But the Tigers were even more inept — interceptions ended four straight drives — and Tennant finally knocked through a field goal to extend the lead to 26-6 entering the fourth quarter.

Vaughn and D.J. Giddens tacked on touchdown runs to put away the Wildcats' longtime rival.

“It's a big-time win,” Vaughn said. “A lot of kids on this team are from Missouri. They were overlooked by Missouri. It means a lot to us to get the win the way we did.”

Missouri couldn't overcome the eight penalties, four turnovers and myriad mental lapses that kept sending their offense to the sideline. The Tigers eventually wore down on defense, allowing Kansas State to cruise to the finish.

Kansas State was far from perfect, failing to fully capitalize on Missouri's turnovers thanks to plenty of penalties of its own. And with Oklahoma awaiting in two weeks, the clock is running on the Wildcats to clean those mistakes up.