Hogs up to the task, carve Gamecocks 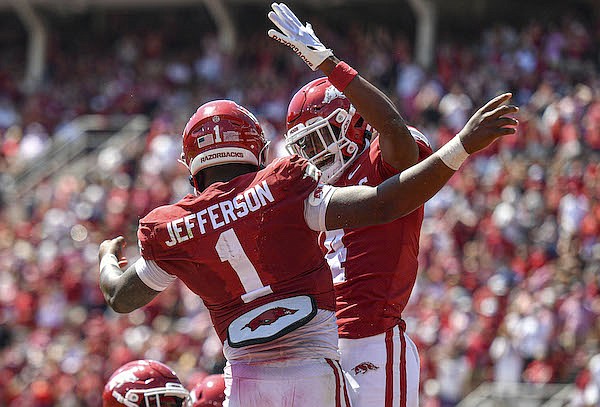 Arkansas quarterback KJ Jefferson (1) and receiver Malik Hornsby (4) celebrate during a game against South Carolina on Saturday, Sept. 10, 2022, in Fayetteville.

FAYETTEVILLE — The University of Arkansas challenged South Carolina to dig down in the trenches and stop their boss run game on Saturday.

The Gamecocks were not up to the task.

No. 16 Arkansas carved up the Gamecocks for 295 yards and five touchdowns on the ground and posted 3 takeaways, 6 sacks, 9 tackles for loss and a safety on defense to subdue South Carolina 44-30 at Reynolds Razorback Stadaium in the SEC opener for both schools.

The Razorbacks (2-0) won back-to-back SEC openers for the first time since 2003-04 — both against Alabama — and snapped a three-game skid against the Gamecocks (1-1) while improving to 14-10 in the series.

Arkansas controlled the clock with at punishing ground attack, leading in possession time 34:37 to 25:23 and outgaining South Carolina 457-411 in total offense.

“I was really proud of our offensive line,” Arkansas Coach Sam Pittman said. “We asked them to kind of control the game, and I felt like they did. … I think the offensive line wore them down.”

The Razorbacks had 300 rushing yards until Jefferson knelt for a 5-yard loss to run out the clock after Chris Paul recovered a strip sack forced by Jayden Johnson for their third takeaway.

“Coach Pitt… pretty much called out the O-line and D-line and said the game’s on our backs,” Arkansas offensive tackle Dalton Wagner said. “The game will be won in the trenches by us. And the O-line took it really personally this week to make sure we could run the ball.”

Sanders has opened the season with back-to-back 100-yard games and had a two-touchdown game for the second time in three outings, dating to the Outback Bowl in his home state of Florida on Jan. 1.

“I feel like we’re watching film and knowing what the defense is going to do and figuring out if they’re man or zone,” Sanders said. “I feel like the outside zone and inside zone hit today.”

Arkansas played without ace safety Jalen Catalon, who is lost for the season with reconstructive shoulder surgery, and nickel back Myles Slusher, and the secondary had an up-and-down performance while giving up a handful of big plays. Latavious Brini started in place of Catalon and had a key forced fumble, and Johnson started at Slusher’s spot.

South Carolina quarterback Spencer Rattler completed 23 of 38 passes for 371 yards, with a touchdown and an interception, to make up for a Gamecocks running attack that managed just 40 yards on 29 carries.

The Razorbacks’ pass rush got to Rattler in the fourth quarter with South Carolina in catch-up mode. In that period — which took an epic 1 hour and 12 minutes — Arkansas forced and recovered two fumbles, Dwight McGlothern picked off Rattler in the end zone, Bumper Pool returned an onside kick 34 yards to set up a short touchdown drive and Jordan Domineck forced an intentional grounding in the end zone for a safety.

“First of all, give credit to Arkansas, heck of a football team and they showed that today,” South Carolina Coach Shane Beamer said. “Proud of our football team and the way that we fought, battled throughout the game. Obviously we can’t turn the ball over, especially in the fourth quarter. … I guess we had an interception, a fumble, safety, so at least two turnovers in the fourth quarter, and you can’t win football games on the road in the SEC doing that, that’s for sure.”

The Razorbacks seemed in full control after powering their way for touchdown drives covering 63, 75 and 61 yards on their first three possessions to take a 21-3 lead.

But the Gamecocks got their passing game in gear behind Rattler, stopped a fourth-and-1 quarterback sneak in the third quarter and pulled within 21-16 on Antwane Wells’ 38-yard catch-and-run touchdown.

Wells torched the Razorbacks with 185 receiving yards on eight receptions, with 103 yards after the catch.

“We had a game plan to just go out there and just attack,” Wells said. “Things just didn’t go that well for us in the first half, but we came out in the second half and tried to fix up a few things. They started to get us to rolling.”

South Carolina regained possession with the score still 21-16, but Pool sacked Rattler for a 15-yard loss back to the Arkansas 7, forcing a punt.

That big play set up a 14-play, 59-yard march capped by Jefferson’s 2-yard touchdown run on the first play of the fourth quarter for a 28-16 edge.

“My mentality is when I’m running the ball, one man can’t tackle me,” Jefferson said. “I try to carry that throughout when I’m in the pocket or anything. That’s just my mentality. That’s just a mind thing to be able to just run hard, fall forward, gain positive yards, just keep the chains rolling.”

The Razorbacks resumed control moments later when Brini dropped his helmet onto the ball after a catch by MarShawn Lloyd and cornerback Hudson Clark recovered at the Gamecocks’ 41.

The Hogs’ powerful running attack lured the South Carolina secondary up on a Jefferson roll-out, and he connected with Warren Thompson in the back of the end zone for a 23-yard score and a 35-16 lead.

Rattler guided the Gamecocks back into scoring range, but McGlothern — whom his teammates called by his nickname “Nudie” — jumped up to high-point a pass in the end zone intended for Wells to give him interceptions in his first two games with the Hogs.

One big drawback for the Razorbacks were a plethora of penalties, 10 of them totaling 122 yards.

The infractions included two holding calls on offense and three personal fouls on defense for illegal hands to the face against Cam Ball, Landon Jackson and Domineck.

“We’ve got to get it fixed,” Pittman said. “I mean, we had three personal fouls to the face. We had a holding, I don’t know how many holding calls. Several. Had two penalties on special teams. There were a lot of flags out there today.”