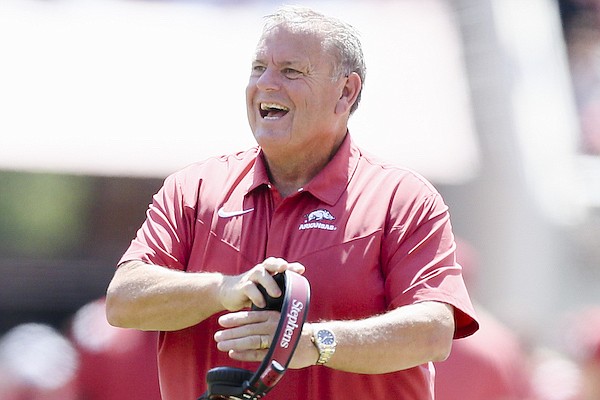 Arkansas football coach Sam Pittman is shown during a game against South Carolina on Saturday, Sept. 10, 2022, in Fayetteville.

FAYETTEVILLE — Unfortunately for University of Arkansas safety Jalen Catalon and the Razorbacks, his comeback season lasted just one game.

Catalon will miss the rest of the season, Arkansas Coach Sam Pittman confirmed Saturday, after he suffered a shoulder injury in last week’s opener against Cincinnati.

Arkansas’ 31-24 victory over the Bearcats was Catalon’s return to the lineup after he missed the final seven games last season following shoulder surgery.

Pittman said Catalon, a redshirt junior and a preseason Associated Press All-American, suffered another shoulder injury that will require surgery and cause him to miss the rest of the season.

“Catalon is having surgery on his shoulder — reconstructive surgery — so he won’t be back this year,” Pittman said after the No. 16 Razorbacks beat South Carolina 44-30 on Saturday. “I feel for him.”

Catalon was not at Saturday’s game.

“We’ve had conversations and I’m going to let him be away from the building a little bit,” Pittman said. “I mean, he’s down.

“You would be too if you put in all that work for two years and you’re not able to play.”

Catalon’s last full season was 2020, when he had 99 tackles and 3 interceptions in 10 games — all against SEC teams. He earned first team All-SEC honors.

Catalon had eight tackles last week before leaving early in the third quarter, giving him a career total of 159 in 21 games.

Junior safety Myles Slusher, who missed Saturday’s game with an undisclosed injury he sustained against Cincinnati, should return for next week’s game against Missouri State, Coach Sam Pittman said.

“Trey had an ankle [issue] going into the game,” Coach Sam Pittman said. “I thought he toughed it out pretty good, but we’ve got to get him healthy, too.

“We’re dinged up a little bit, but I think with our schedule, you’re going to stay that way. We’ve just got to figure it out.”

Knox had one catch for a 5-yard gain on a shovel pass from KJ Jefferson.

Senior safety Simeon Blair served as a team captain for the Razorbacks for the pregame coin toss Saturday in place of injured Jalen Catalon.

“Blair was the next-highest vote-getter for captain, so we made him a captain [Friday] in our team meeting,” Coach Sam Pittman said. “The team was ecstatic about that.

“I had also talked to Cat about that, and Cat had talked to me about it, that since [Catalon] won’t be able to come back this year, that it would be nice if Blair was able to be a captain.

“It’s just right, because he was the next vote-getter.”

Arkansas was penalized 10 times for 122 yards, including three calls for hands to the face.

“The hands to the face … I certainly haven’t seen that in practice and I watch every rep of everything — one-on-ones and individual and team,” Pittman said. “I don’t believe we’ve had one before, but we’ve got to get it cleaned up.”

Senior Latavious Brini, a transfer from Georgia, made his first start at a Razorback, starting in place of Jalen Catalon.

Arkansas junior defensive back Khari Johnson made his second career start in place of Myles Slusher, who also was injured last week.

It was the second career start for Johnson. His first start was at Auburn in 2020.

South Carolina cornerback O’Donnell Fortune was called for targeting when he had a helmet-to-helmet hit on Arkansas quarterback KJ Jefferson with 1:53 left in the second quarter.

But after a video review, officials determined it wasn’t targeting, which saved South Carolina a 15-yard penalty and allowed Fortune to stay in the game.

If the penalty had been upheld, Arkansas would have had a first down at the South Carolina 13.

Instead the Razorbacks had the ball at the Gamecocks’ 25, and the drive ended with a missed 50-yard field goal attempt by Cam Little.

Arkansas backup quarterback Malik Hornsby lined up at running back in the second quarter and had a carry for an 8-yard gain.

Hornsby lined up at wide receiver last week against Cincinnati and got a lateral pass that was designed for him to pass downfield, but he instead kept the ball and ran for a 13-yard gain.

Arkansas earned a safety in the fourth when South Carolina quarterback Spencer Rattler was called for intentional grounding in the end zone.

Defensive end Jordan Domineck was credited with a sack on the play.

It was Arkansas’ first safety since 2015 against Toledo.

Junior offensive lineman Ty’Kieast Crawford got some snaps at right tackle in the fourth quarter when senior starter Dalton Wagner got a break.

Coach Sam Pittman has said Crawford deserves to play, and made sure he got some snaps Saturday after he didn’t play on offense last week against Cincinnati.

Arkansas improved to 14-10 against South Carolina including 6-2 in Fayetteville.

Missouri, which joined the SEC along with Texas A&M in 2013, became Arkansas’ annual opponent from the East starting in 2014.

Prior to Saturday, Arkansas had lost three in a row against the Gamecocks.

The Razorbacks’ last victory against South Carolina had been in 2011 when they beat Gamecocks 44-28 in Fayetteville.

Eric Musselman, Arkansas’ men’s basketball coach, was presented with an 8-foot, hand-crafted, custom-made surfboard on the field during the second quarter in recognition of his team’s appearance in the Maui Invitational this season.

Arkansas will play Louisville in the Razorbacks Maui Invitational opener on Nov. 21 in the Lahaina Civic Center. Tipoff will be 4 p.m. Central with the game televised on ESPN2.

The U.S. and Arkansas state flags were lowered to half-mast Saturday in remembrance of Queen Elizabeth II, the British monarch who died on Thursday at age 96.

President Joe Biden issued an order for flags to be lowered out of respect to the Queen’s memory.

South Carolina placekicker Mitch Jeter missed an extra point attempt in the second quarter after a low snap by Hunter Rogers and Kai Kroeger shanked a punt that went 21 yards in the first quarter.

South Carolina then had an onside kick backfire after the Gamecocks had closed within 35-24 with 6:25 left.

Arkansas linebacker Bumper Pool fielded the kick at the South Carolina 43 with no one on the coverage team near him and returned it 34 yards to the Gamecocks’ 9.

Pool’s return set up a touchdown run by AJ Green that pushed Arkansas’ lead to 41-24 with 6 minutes left.

The Gamecocks then recovered an onside kick for their final possession.

South Carolina’s miscues came a week after the Gamecocks excelled on special teams in their 35-14 victory over Georgia State.

The Gamecocks scored two touchdowns on blocked punts against Georgia State, had another touchdown set up by a successful fake field goal and Kroeger was named Ray Guy Punter of the Week after he averaged 49.1 yards on seven attempts.

Arkansas and South Carolina each have assistant coaches who previously worked at the other school.

Deke Adams, in his first season as the Razorbacks’ defensive line coach, held the same position with the Gamecocks from 2013-15.

Justin Stepp is in his second season as South Carolina’s wide receivers coach after holding the same position at Arkansas from 2018-2020.