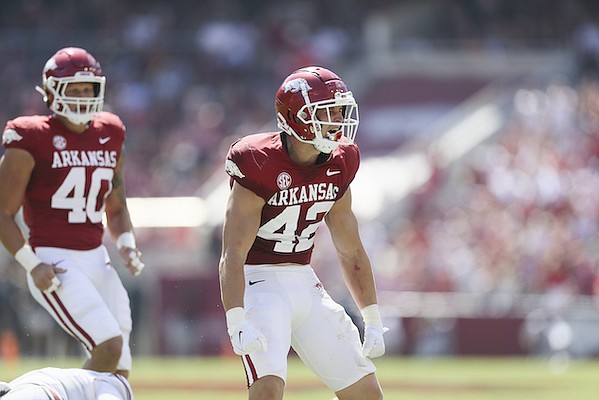 Arkansas linebacker Drew Sanders (42) celebrates a tackle during a game against South Carolina on Saturday, Sept. 10, 2022, in Fayetteville.

Arkansas was led offensively by sophomore tailback Raheim “Rocket” Sanders, who had career-highs of 24 carries for 156 yards and 2 touchdowns and added 3 receptions for 30 yards in the No. 16 Razorbacks’ 44-30 victory over South Carolina.

Arkansas’ defense was led by junior linebacker Drew Sanders, who had a career-high 11 tackles, including 3 for losses totaling 14 yards. He had two sacks.

Both made big plays early as Rocket Sanders rushed 10 times for 53 yards in the first quarter — including a 1-yard touchdown run for a 7-0 Arkansas lead — and gained 17 yards on a screen pass. He then had an 11-yard touchdown run to put the Razorbacks ahead 14-3 on their second drive.

Drew Sanders broke up a pass on third and 5 from the Arkansas 10 on South Carolina’s second possession to force a field goal, then on the Gamecocks’ next drive dropped tight end Jaheim Bell for a 2-yard loss on a rush attempt and sacked quarterback Spencer Rattler for an 8-yard loss.

“I think he played a heck of a game,” Arkansas Coach Sam Pittman said. “He’s getting better each week because he’s understanding and turning it loose a little bit more.”

“If you see today versus when he first came in the spring, you’d think you had two totally different people,” Pittman said. “He’s a really good player and a great kid, and I’m glad he had a great game today.”

Rocket Sanders had his second consecutive game rushing for more than 100 yards. He had 17 carries for 107 yards last week in the Razorbacks’ 31-24 victory over Cincinnati.

Rocket Sanders has become Arkansas’ lead running back with sophomore Dominique Johnson — who dressed out Saturday, but didn’t play — continuing to recover from a knee injury.

“He’s comfortable back there. He’s seeing signals faster, he’s getting lined up.

“Sometimes if I run, he gets to where he’s telling the O-Line what to do. So he’s grasping this system. He’s learning each and every day. He’s just building and maturing at the same time.”

Senior offensive tackle Dalton Wagner agreed Sanders’ confidence has gone to another level from last season, when he rushed 114 times for 578 yards.

“He makes the O-line right when we should probably be wrong,” Wagner said. “And he knows how to be patient where you can get that edge.”

Drew Sanders also has been impressive on the edge rushing the quarterback. Along with his tackles and sacks Saturday, he had two forced fumbles.

“I felt pretty great going into the game,” Sanders said. “I felt comfortable and confident with what our defense had us doing.

“It put me in a great position to make plays, and I just did my best to do my job.”

“We love him,” Arkansas senior safety Simeon Blair said. “He’s a hard worker. He’s not going to say much, but he’s always going to do what he’s supposed to do.

“We’re finally getting him to open up a little bit more. He’s definitely a playmaker. He does his job.

“We know if we send him on a blitz, he’s 9 times out of 10 going to get the sack. If not, he’s going to pressure the quarterback.”

“Man, Drew had a great game today,” Brini said. “I look up, I see Drew making a play every time.

“I turned to somebody and I said, ‘That’s Drew? Drew is making that play?’ Drew did great. Drew is awesome.”

Pittman said during training camp that Rocket Sanders would have a heavy workload carrying the ball, and he’s proven to be ready.

“I feel good, actually,” Rocket said. “I take everything serious outside of football as well as, like treatment. I’m in there every day. So I know what’s in front of me and I’ve just got to attack it.”

Rocket Sanders made sure to credit the Arkansas offensive linemen.

“It’s going into my second year playing with them and I feel more comfortable,” he said on Arkansas’ postgame radio show. “During practice I talk to them and they talk to me. Running backs go into their room and meet with them.

“A big shout-out to the offensive line.”

Wagner said Rocket Sanders has continued to mature from his freshman season.

“I’ve seen him grow,” Wagner said. “Everything he does inside the facility and outside, he’s a professional.”

Pittman said Sanders is becoming more of an all-around back.

“He’s blocking better in protection, he’s running the ball, falling forward better,” Pittman said. “A hundred and something yards rushing in back-to-back is pretty good. He’s a better back than he was a year ago. He’s playing well.”