After 'rocky' start, Brini settled in with Hogs 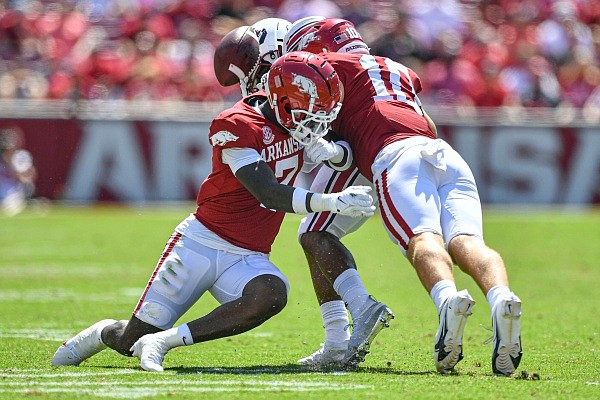 Arkansas defensive back Latavious Brini (7) tackles and forces South Carolina running back MarShawn Lloyd (1) to fumble on Saturday, Sept. 10, 2022, during the fourth quarter of the Razorbacks’ 44-30 win at Donald W. Reynolds Razorback Stadium in Fayetteville.

FAYETTEVILLE — Football teams that lose key players to injury throughout the course of a season often reference one thing in the aftermath: A next-man-up mentality.

In Week 1 against Cincinnati, Arkansas safety Jalen Catalon suffered another season-ending shoulder injury that third-year coach Sam Pittman said would require reconstructive surgery. Not having a talent the caliber of Catalon on the field yet again is a big blow to the Razorbacks.

But Arkansas is confident in its next man up, Latavious Brini.

The Georgia transfer filled in for Catalon for the first time during the Razorbacks’ 44-30 victory over South Carolina last week. He finished with 4 tackles, 3 solo stops, 1 quarterback hurry and 1 critical forced fumble.

“Brini started several games for Georgia last year — started — so it’s kind of hard for me to go, ‘Woe are we,’ whenever we’ve got a guy who started a lot of games for the national champions," Arkansas coach Sam Pittman said.

“He has to come in and play our system and play it well.”

Pine Bluff native and former walk-on Simeon Blair, who is now a captain in Catalon’s stead, noted that Brini’s ability to come into a new defense, learn the playbook and perform as he has through two games speaks volumes. He is fifth on the team with nine tackles, including five solo.

Following the South Carolina game, Brini, in his first interview appearance as a Razorback, thanked running mates in the secondary for pushing him to be as game ready as possible early on in his time at Arkansas. He also admitted it was a bit rocky at first.

“With Cat being out, the responsibility is like, when I first got here they always just made sure they kept me accountable — people like Sim and Cat — so it was really no pressure....Just making sure I’m accountable for everything I do.”

Pittman said Monday that Brini’s not-so-smooth beginning in the program was due, in part, to not taking an official visit to Arkansas. He added there were likely a number of contributing factors, including the Razorbacks having better players on the roster than Brini may have imagined.

“If you've never been to Arkansas or basically anywhere and you go in there, it may or may not be what you thought it was going to be,” Pittman said. “We were further away from home for him, all kinds of different things, but, I mean, he said it. He didn't really get going.

“He wasn't swift in getting going when he first got here. But he's a mature kid, a great kid and I'm glad that he finally has gotten comfortable.”

Brini’s forced fumble came at an ideal point in time. After Arkansas scored on a 2-yard touchdown run from quarterback KJ Jefferson, Brini jarred the ball from the arm of Gamecocks running back MarShawn Lloyd two plays later.

More from WholeHogSports: The Razorbacks' depth chart for Week 3 against Missouri State

Arkansas turned the takeaway into points in a hurry with Jefferson’s lone touchdown pass to receiver Warren Thompson from 23 yards away. Brini noted after the win that he was fired up to make the play.

And he should have been. It was the first forced fumble of his career, which began at Georgia in 2018.

“On the fumble, if y’all didn’t see me out there I was jumping for joy,” said Brini, who is battling an ankle injury but is healthier entering Missouri State game week than tight end Trey Knox (ankle), Pittman said. “When I hit the ball out, I said, ‘The ball came out!’