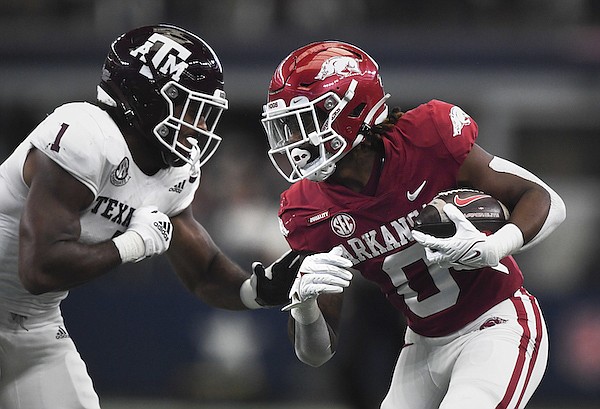 Arkansas running back AJ Green (0) runs past Texas A&M linebacker Aaron Hansford for a touchdown during a game Saturday, Sept. 25, 2021, in Arlington, Texas.

FAYETTEVILLE — Arkansas' Sept. 24 game against Texas A&M will kick off at 6 p.m. at AT&T Stadium in Arlington, Texas.

The game will be televised by ESPN, marking the Razorbacks' first televised primetime game this season. Arkansas (2-0, 1-0 SEC) is scheduled to host Missouri State on Saturday night on ESPN's streaming platform.

Arkansas is ranked 10th and Texas A&M is ranked 24th in the Associated Press Top 25 poll this week. The Aggies (1-1) are scheduled to host 13th-ranked Miami on Saturday.