Hogs moving on without captain Catalon 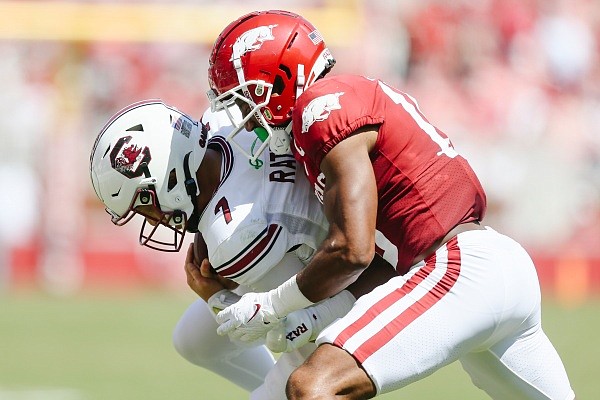 FAYETTEVILLE — For a second consecutive season, Arkansas must play without its top defensive back in All-SEC safety Jalen Catalon.

But as the Razorbacks showed last season in finishing 9-4 and this season in starting 2-0, the secondary has other players it can rely on.

Catalon suffered what proved to be a season-ending shoulder injury early in the third quarter in this season’s opener against Cincinnati that will require surgery.

The Razorbacks held on to beat Cincinnati 31-24 last week, then opened SEC play with a 44-30 victory over South Carolina.

Catalon, a redshirt junior, also had a shoulder injury last season that required surgery and he missed the final seven games.

Arkansas is 6-2 in games Catalon has missed, including victories over Mississippi State, LSU, Missouri and Penn State last season when the Razorbacks finished No. 21 in The Associated Press poll.

After opening this season ranked No. 19, the Razorbacks are up to No. 10 in the latest AP poll released Sunday. They moved up from No. 16, where Arkansas was ranked after beating Cincinnati.

Catalon, an All-SEC first team pick in 2020 when he had 99 tackles, 3 interceptions and 2 forced fumbles in 10 games, was a preseason AP second-team All-American each of the last two years.

“We always would love to have Catalon because of how talented he is,” senior safety Simeon Blair said. “But we have a lot of players.”

The Razorbacks also played without starting nickel back Myles Slusher against South Carolina because of an undisclosed injury he sustained in the Cincinnati game, but Coach Sam Pittman said he’s expected back for Saturday night’s game against Missouri State.

Jayden Johnson broke up a deep pass intended for Ahmarean Brown to prevent a touchdown, sacked Spencer Rattler for a 6-yard loss while forcing a fumble recovered by linebacker Chris Paul and had a quarterback hurry.

Blair had five tackles and Brini had four with a quarterback hurry. McGlothern had four tackles.

South Carolina hit some big plays as Rattler, a transfer from Oklahoma, completed 24 of 39 passes for 376 yards.

“Well, I think sometimes really good and sometimes not really good,” Arkansas Coach Sam Pittman said when asked how he thought the defensive backs played. “To me, we covered well at times and we covered poorly at times.

“We just have to become more consistent. I think we can do that. But with the first week of losing two of your top defenders and coming out with a win like that and fighting and scrapping, I thought it was good.

“They played Arkansas football. Do we have to get better? Yeah. Do we need to get Slusher back? Yes.

“There’s a lot of things going on, but I thought they played well for their first time [without Catalon and Slusher].”

“We felt really good about our ability to throw the football,” Beamer said. “Not that we didn’t with the run game. But they had two starters out with Catalon and Slusher. Those were big losses for them.

“Cincinnati had some opportunities in the passing game that they weren’t able to capitalize on as well. We felt like we could take our shots downfield, which is what we did.

“We liked our matchups in the passing game for sure.”

Brini didn’t arrive at Arkansas until the summer.

“Brini’s a really good player,” Blair said. “He came into our system, and we do a lot of stuff. I feel like we require a lot of communication and with that communication, that means you’ve got to learn the playbook real fast.

“So it’s kind of hard for me to go, ‘Woe are we,’ whenever we got a guy who started a lot of games for the national champions,” Pittman said. “He has to come in and play our system and play it well.

“It was good from the transfer portal to have him back there.”

Brini said he appreciated how Arkansas’ players and coaches welcomed him to the program.

“Because when I came here from Georgia, it was a little rocky and they took me in with wide open arms,” Brini said. “They showed me nothing but love.”

Pittman said he didn’t want to use the loss of Catalon for the season and Slusher at least for the South Carolina as an excuse.

“I said to the team in the pregame speech it’s not about the players that ain’t out there, it’s about the ones that are,” Pittman said. “I’m sympathetic for both injuries — very, very.

“Slush and Cat get it too, and [injured defensive lineman] Taurean Carter. Whoever you don’t have out there.

“At that time it’s about the ones that are out there and they fought their tails off I thought.”

During spring practice, summer workouts and preseason camp, Arkansas’ defensive backs did plenty of cross-training between the safety and cornerback spots.

“I feel like it was a hard game, but it also was great to see all our training paying off, after doing all the stuff in the summer and fall camp,” Blair said. “Switching positions and moving everybody around. I feel like it definitely helped us.”