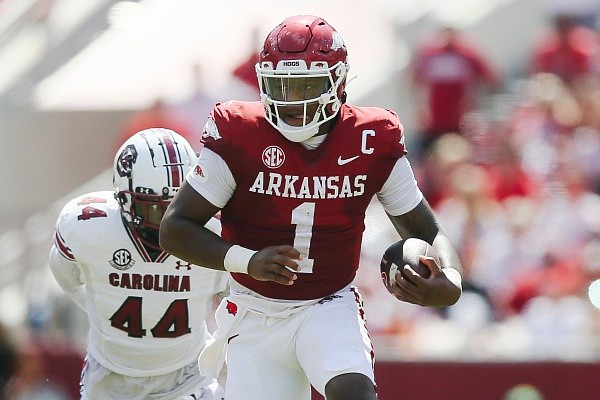 Arkansas quarterback KJ Jefferson carries the ball on Saturday, September 10, 2022, during the second quarter of a football game at Donald W. Reynolds Razorback Stadium in Fayetteville.

FAYETTEVILLE — Arkansas quarterback KJ Jefferson moved into the top seven in the latest betting odds for the Heisman Trophy released on Sunday by SportsBetting.ag.

Jefferson, who has 385 passing yards and a completion percentage of 76.6%, 129 rushing yards and 6 touchdowns responsible for, was given 33-1 odds to claim the highest individual award in college football.

He is just ahead of Clemson quarterback DJ Uiagalelei (40-1) and USC receiver Jordon Addison (40-1).

The Razorbacks jumped six spots on Sunday to reach No. 10 in the Associated Press Top 25 poll after a 44-30 win over South Carolina in their conference opener.

Arkansas (2-0) is ranked in the top 10 in consecutive years for the first time since 2011-12. The first of those seasons the Razorbacks were coached by Bobby Petrino, who will bring his Missouri State team into Fayetteville for Saturday’s 6 p.m. game. The Bears (2-0) are No. 5 in the latest FCS rankings.

The Arkansas Democrat-Gazette uses the AP rankings as its poll of record until late October, when the College Football Playoff rankings are released.

Arkansas’ highest ranking this week is No. 9 in the Football Writers Association of America’s Super 16 poll, where it jumped four places to its highest spot ever in those rankings, which debuted in 2014.

Third-year Coach Sam Pittman touted the impact of starting with a win in conference play.

“That’s a good team,” Rattler said. “That’s a top 20, top 15 team and we just went head to head with them. So, you know, we’ve got people’s respect, and we’re just going to keep going out and fighting.”

The Razorbacks are No. 11 in the USA Today Coaches poll, just behind No. 10 Kentucky. They improved six spots in that poll, tying Ole Miss for the fourth-highest jump behind Brigham Young, which improved 11 spots after a 26-20 two-overtime win over Baylor, Kentucky (10) and Tennessee (10).

The Razorbacks peaked at No. 8 in the AP poll last season after a 4-0 start that culminated with a 20-10 win over then-No. 7 Texas A&M in Arlington, Texas.

Arkansas was No. 10 in the preseason rankings of 2012 and the Hogs moved up to No. 8 after a win in the season opener, but they fell out for good after a 34-31 upset loss to Louisiana-Monroe in overtime.

For the next decade, the Razorbacks were ranked just eight times, two in 2015 and six in 2015, before Coach Sam Pittman took the reins.

Arkansas was in the AP rankings 10 weeks last year and in all three sets of rankings this year, starting with a preseason No. 19 nod.

Sanders, a junior from Denton, Texas, recorded 11 tackles, 2 sacks, 2 forced fumbles, a pass breakup and a hurry in the Razorbacks’ win over South Carolina.

“I felt comfortable and confident with what our defense had us doing,” Sanders said. “It just put me in a great position to make plays and I just did my best to do my job.”

Safety Simeon Blair said Sanders did a great job against the Gamecocks.

“We’ve been harping on him ever since he got here,” Blair said. “We love him. He’s a hard worker. He’s not going to say much, but he’s always going to do what he’s supposed to do.”

Sanders is the fifth Arkansas player to take Walter Camp player of the week honors since 2004 and the first since Hayden Henry did it last year following a 40-21 win over Texas.

The Razorbacks and South Carolina played a turnover-free game until the fourth quarter.

In the final frame, Latavious Brini forced a fumble that was recovered by Hudson Clark, Dwight McGlothern intercepted Spencer Rattler in the end zone, and Chris Paul corralled a fumble forced by Jayden Johnson on the second-to-last play of the game.

The Razorbacks now have a 5-1 edge in takeaways on the season, a plus-two margin per game that leads the SEC and is tied for eighth in the country.

Arkansas leads its opponents 21-3 in points scored off of turnovers, with a 14-3 margin against Cincinnati and a 7-0 edge against South Carolina.

The Razorbacks have 28 interceptions in 25 games since Barry Odom’s debut as defensive coordinator in 2020, the most in the SEC in that span.

The Razorbacks continued to exhibit different ways to get the ball in the hands of their playmakers in the Kendal Briles offense as they racked up 295 yards on 65 carries, with 7 gains of 10-plus yards.

Seven different players helped generate the 295 rushing yards against South Carolina, including wideouts Jadon Haselwood and Matt Landers and backup quarterback Malik Hornsby, who had gains of 8 and 9 yards on consecutive plays, on a pass and the other a run.

Raheim Sanders did the bulk of the work with a career-high 156 rushing yards on 24 carries, while KJ Jefferson added 67 yards on 19 attempts.

Bumper Pool fielded South Carolina kicker Mitch Jeter’s onside kick perfectly with no defender in front of him midway through the fourth quarter with Arkansas ahead 35-24.

Pool charged off for the end zone but he was caught by Gamecocks at the 9-yard line with 6:00 remaining.

Safety Simeon Blair had a humorous take on both ends of the play.

“I loved it, because I had to block the biggest dude on the line,” Blair said. “So when he got [the ball], everybody else stopped. That was great for me.”

Blair then said, “If he’d had a little bit more speed he would have scored,” drawing laughter from reporters and his teammates. “We’ll keep that to ourselves.”

Missouri State, led by former Arkansas Coach Bobby Petrino, improved to 2-0 with a 35-30 win over Tennessee-Martin last week. The Bears, No. 5 in the latest FCS rankings, gained a measure of revenge, as UT-Martin knocked them out of last year’s FCS playoffs.

Missouri State has played on Thursday each of the first two weeks, with a 27-14 win over the University of Central Arkansas in Conway in their season opener on Sept. 1.

The game was paused for about three minutes on South Carolina’s first possession due to an issue with the placement of the chains. The Gamecocks were set to run a 3rd-and-4 play from the Arkansas 43 when the officials noticed the sideline chains indicated the line to gain was the Arkansas 41.

Fans booed as the game was paused for the issue to be sorted out. The Gamecocks were eventually penalized 15 yards for an illegal hands to the face and threw incomplete on 3rd and 19.

“Rocket” Sanders slashed his way for a career-best 156 yards and 2 touchdowns on 24 carries. He has scored two touchdowns in three of the last four games dating to last season. The Rockledge, Fla., product had 27 touches for 186 all-purpose yards.

Sanders had a field day with a career-high 11 total tackles, 8 of them solo, 3 tackles for loss, 2 forced fumbles, a pass breakup and a hurry. The Denton, Texas, product posted 12 yards in losses on his sacks and his 2 forced fumbles tied a UA single-game record.