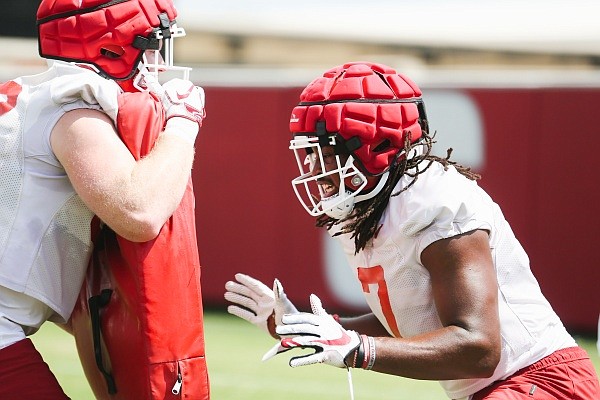 FAYETTEVILLE — Arkansas' football team on Monday went through its first practice in preparation for Missouri State. Weather was perfect on campus and the Razorbacks worked outside Walker Pavilion.

Here are a few notes and takeaways from the periods of practice open to reporters:

• Tight end Trey Knox and safety Latavious Brini, both dealing with ankle injuries from the South Carolina game, were present and went through drills. It looked like Knox was walking around gingerly.

Arkansas coach Sam Pittman said at his Monday press conference previewing the week that Brini is the healthier of the two players.

"We’ve got to watch him," Pittman said of Knox. "I think he’ll be fine this weekend. I think we really have to watch him. ... (Individual drills are) also a good way to find out where they really are injury-wise."

• I did not see nickel/safety Myles Slusher, and cornerback LaDarrius Bishop was not present. Pittman noted Monday that Bishop will not play against Missouri State.

Bishop's absence is likely why Keuan Parker ran some with first-team guys at the front of the line in a couple of drills. Pittman wants to see Parker play this week because "he’s earned it."

• Rison native Malik Chavis was running with cornerbacks in position group work. Khari Johnson was with the safeties.

• Running back Dominique Johnson again went through drills with his group. Today he was not wearing a brace on the knee he injured in the Outback Bowl and later had surgery on. It is the first time he has not worn the brace during a workout open to reporters.

• Defensive coordinator Barry Odom, who also coaches safeties, worked with that bunch on breaking down and wrapping up wide receivers on quick throws toward the sideline. I fully expect Missouri State to test Arkansas in that area. Odom threw the passes to receivers.