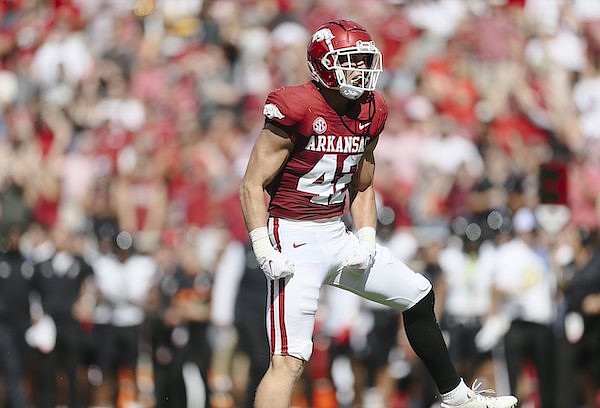 Arkansas linebacker Drew Sanders celebrates a sack during a game against Cincinnati on Saturday, Sept. 3, 2022, in Fayetteville.

Sanders was named SEC co-defensive player of the week after a dominant performance in the Razorbacks’ 44-30 victory over South Carolina on Saturday and Stromberg earned co-offensive lineman of the week. They shared the awards with Kentucky's Jordan Wright and Mississippi State's LaQuinston Sharp, respectively.

Sanders was also named national defensive player of the week by the Walter Camp Football Foundation on Sunday. He finished with a career-high 11 tackles, 3 tackles for loss, 2 sacks and 2 forced fumbles.

The Alabama transfer also broke up a pass by Gamecocks quarterback Spencer Rattler and hurried him once.

Sanders is the second Arkansas linebacker to earn SEC defensive player of the week this season. Bumper Pool was given the award following a 13-tackle game in the Razorbacks’ season-opening win over Cincinnati on Sept. 3.

According to Pro Football Focus, Sanders has an overall defense grade of 69.5 through two games. His pass rush mark of 90.1 is tied for third best in the FBS.

Stromberg, a senior, played 88 snaps against the Gamecocks and was key to Arkansas rushing for 295 yards and 5 touchdowns. Through two games, Stromberg has an overall offense grade of 71.6, according to PFF.