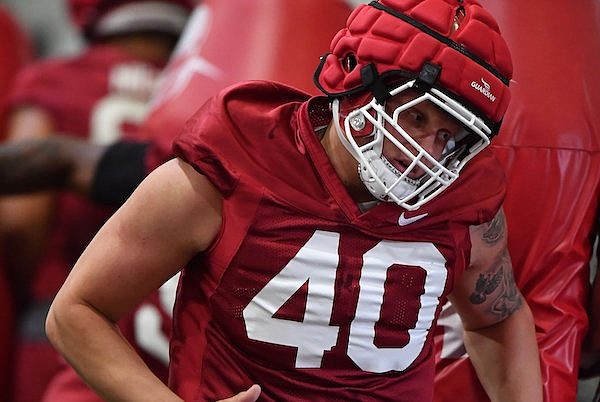 FAYETTEVILLE — Arkansas' football team on Tuesday went through its second practice ahead of Saturday's home game against Missouri State. Weather was ideal, so the Razorbacks worked out outside Walker Pavilion.

Here are a few notes and observations from the opening viewing periods:

• About midway through reporters’ time at practice, starting defensive tackle Isaiah Nichols was looked at by the training staff for a potential shoulder injury. He was definitely in some pain, but he walked in the direction of the grass practice field several minutes later.

It is unclear whether or not he rejoined the defense for other team periods. The injury took place after the Fastball Start, which he participated in.

Nichols noted in player interviews Tuesday night, however, that he is feeling fine. "I'm good. I'm good," he said.

• Did not see safety/nickel Myles Slusher or cornerback LaDarrius Bishop for the second straight day. I’m told Bishop is dealing with a knee injury.

• Malik Chavis, the Rison native, and LSU transfer Dwight McGlothern were the top corners in the Fastball Start period. Keuan Parker and Hudson Clark, who has started the first two weeks, were with the second team.

• It again looked to me like tight end Trey Knox was favoring his injured ankle. Georgia safety transfer Latavious Brini appears to be fine. He also injured his ankle in Week 2 against South Carolina.

Knox went into the game against the Gamecocks with a banged up ankle. Sam Pittman said Monday that Brini is the healthier of the two players.