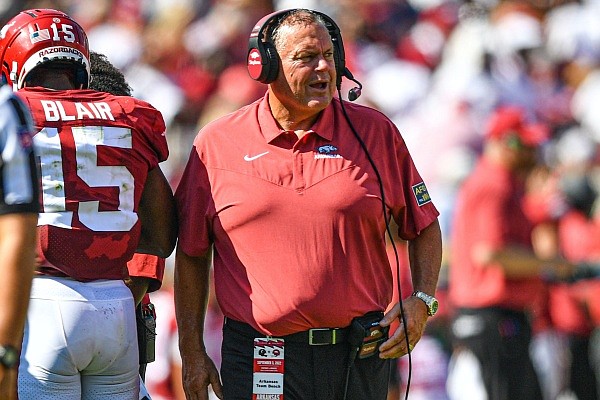 Sam Pittman (right), head coach of Arkansas, walks the sideline on Saturday, Sept. 3, 2022, during the second quarter of the Razorbacks’ 31-24 season-opening win over Cincinnati at Donald W. Reynolds Razorback Stadium in Fayetteville.

FAYETTEVILLE — Arkansas Coach Sam Pittman said his tweet of a UA graphic showing the Razorbacks were No. 10 in The Associated Press poll was largely for recruiting purposes.

The graphic had a large No. 10 front and center with the linebacking trio of Bumper Pool, Drew Sanders and Chris Paul featured, fronted by Pool in his No. 10 jersey.

“Well, I ain’t tweeting it out to you guys or a 50-year-old man. I’m trying to use it as recruiting, you know? So I really don’t care what the guy says, you know what I mean? I’m trying to recruit. Not him or them. I recruit.”

“We’ve been in the top 10 two years in a row. The kids have done it. The coaches, assistant coaches have done it. Yeah, I’m proud of it. I sure am. Whenever it came out, I was smiling ear to ear.

Sam Pittman did not provide definite answers Monday on the health status of tight end Trey Knox (ankle), safety Latavious Brini (ankle) and defensive back Myles Slusher (upper body), though he said he thinks all three have the potential to play on Saturday against Missouri State.

He added running back Dominique Johnson (knee) has been cleared and his return to play is dependent on when Johnson is ready, He also said cornerback LaDarrius Bishop has an undisclosed injury.

Johnson practiced without the knee brace he’s been wearing, while Knox and Brini went through Monday’s workout in shells. Neither Slusher nor Bishop were spotted during the media viewing window.

Asked specifically about Knox, who went into the 44-30 win over South Carolina with an ankle concern and came out during the game, Pittman said, “We’ve got to watch him.

“I think he’ll be fine this weekend. I think we really have to watch him.”

Pittman said the Razorbacks like to bring players who have been cleared from injuries into individual drills to see how they’re moving and gauge their readiness to practice.

“It’s also a good way to find out where they really are injury-wise, so we’re going to do that with him today,” Pittman said, adding that Brini is in the same position.

Sanders and Kentucky linebacker Jordan Wright were co-SEC defensive players of the week, and Stromberg was co-SEC offensive lineman of the week with Mississippi State center LaQuinston Sharp.

Sanders had a career-high 11 tackles against the Gamecocks, including 3 tackles for losses, plus 2 sacks, totaling 14 yards. He also forced two fumbles and had a pass breakup.

“I was asked after the game about Drew Sanders’ play,” Arkansas Coach Sam Pittman said. “I thought he had a good game. I didn’t know he had a hell of a game. I thought he had a really good game, but he did some things that were pretty incredible.”

Stromberg was part of a dominating offensive line performance that led to 457 total yards. He played 88 snaps and had a 76.0 grade by Pro Football Focus. His grade was 61.8 in the opener against Cincinnati.

“To be honest with you — and Ricky will tell you the same thing — I don’t think he played some of his best ball against Cincinnati and there’s reasons for that, guys you’re playing and all that kind of stuff,” Pittman said. “But I thought he had one of his better games Saturday.”

Sam Pittman said he’s not certain where Myles Slusher will line up when he returns from an upper body injury, possibly this week, but he hinted Jayden Johnson is more suited for nickel back and Slusher might be more of a safety.

Khari Johnson, who started at middle safety last week in place of Jalen Catalon, could be in a floating situation with other defensive backs.

“I think we’re kind of going to be a rotating position,” Pittman said. “In other words, if you can play boundary safety, you can probably play nickel. You probably need to. So those would be those two positions for Khari.”

Pittman said he thought Slusher would end up playing multiple positions in a secondary in which defensive coordinator Barry Odom has made cross training positions a staple.

“I don’t know where we would put him to start with,” Pittman said. “To be honest with you, I think Jayden Johnson is better suited to nickel and then that would put Slush back to safety. But I don’t know.”

The Razorbacks’ game on Sept. 24 against Texas A&M in Arlington, Texas, has been selected for a 6 p.m. broadcast, the SEC announced Monday.

The game will be broadcast on ESPN. Arkansas broke a nine-game losing streak in the series with a 20-10 upset over the then-No. 7 Aggies last season.

Arkansas and Missouri State, who will meet for the eighth time Saturday, are scheduled to meet again in the 2025 season-opener on Aug. 30 in Fayetteville.

The Razorbacks have won all seven previous games, all played in Arkansas, including a 51-7 rout in their last meeting on Sept. 3, 2011, when current Missouri State Coach Bobby Petrino worked the Arkansas sideline.

Missouri State Coach Bobby Petrino won’t be the only Bear coming back to the stadium where he once worked.

Missouri State receiver Jordan Jones, who had two catches for 12 yards in the Bears’ 27-14 season-opening win at the University of Central Arkansas, is expected back after missing last week.

Jones signed with the Hogs out of Smackover High School in 2016 and collected 38 catches for 592 yards and 4 touchdowns in 22 games before transferring to Cincinnati and then Missouri State.

“Jordan should be back,” Petrino said. “He’s going through the protocols, concussion protocols. He should be back going today and tomorrow full speed.

“We’re glad he’s back. He’s got good speed. He’s excited to play. He’s an Arkansas kid, so it’ll be good for him.”