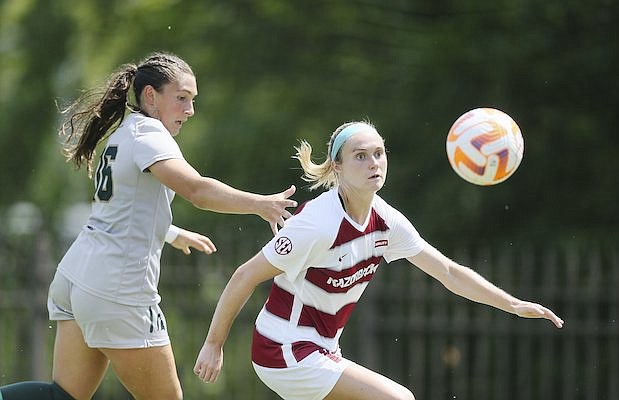 She was named the United Soccer Coaches national player of the week on Wednesday after providing three goals and an assist at BYU and Grand Canyon last week. It is the fourth time she has won the award. She also won twice in 2019 and once in 2020.

The All-America forward celebrated her birthday Monday by being honored as the SEC offensive player of the week. She was also selected as a member on the Top Drawer Soccer team of the week on Tuesday.

With two goals at BYU, Podojil tied former teammate Parker Goins for the most points in program history with 107. Her 41 career goals are three shy of surpassing Julie Williford as the top goalscorer in Arkansas history.

"It would be amazing to break those records," Podojil said Wednesday. "Honestly, I had no idea I even tied (Goins) until my teammate told me."

"She is a phenomenal player and maybe even a better person," Hale said.

Podojil is undecided about whether to pursue a professional soccer career. However, she will have an additional season to weigh her options as she completes her nursing degree in Fayetteville in 2023.

"Right now, I'm planning on taking another year at Arkansas," Podojil said. "I just want to keep breaking records here and leave a good impact on the program."

"Anna has been setting records ever since I can remember," said Ellie Podojil, a redshirt sophomore at Arkansas and Anna's younger sister. "I think the coolest part about it is that she is so humble about it."

The No. 14 Razorbacks (5-1-1) are undefeated in their last five matches. They open SEC play Friday at Mississippi State.

Kickoff is scheduled for 6:30 p.m. and a stream will be available on SEC Network-Plus.