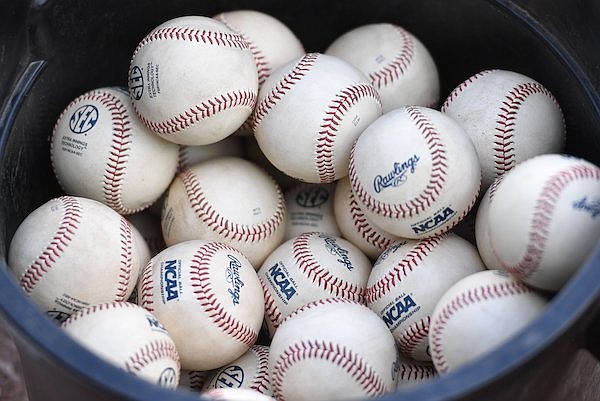 A bucket of baseballs are shown Friday, April 29, 2022, prior to an Arkansas game against Ole Miss at Baum-Walker Stadium in Fayetteville.

The Razorbacks will open the season Feb. 17-19 at the College Baseball Showdown in Arlington, Texas. Arkansas will play Oklahoma State, Texas and TCU at the event, though an order of games has yet to be announced.

Other weekend non-conference series for the Razorbacks include home dates against Eastern Illinois, Wright State and Louisiana Tech.

Arkansas is scheduled to open SEC play with a three-game series against South Carolina on March 17-19, and will play its first road SEC series the following week at reigning national champion Ole Miss in a rematch of the 2022 College World Series semifinals.

The Razorbacks’ other home SEC series include games against Auburn, Missouri, Alabama and Texas A&M. The April 6-8 series against Mizzou will begin on a Thursday due to the Easter holiday.

Arkansas is also scheduled to play road SEC series at LSU, Georgia, Mississippi State and Vanderbilt. The Vanderbilt series will conclude regular-season play and will begin on a Thursday.

* — College Baseball Showdown in Arlington, Texas; order to be determined.