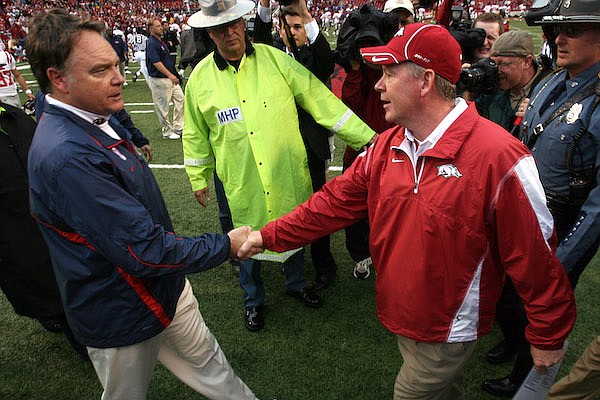 FAYETTEVILLE — When the University of Arkansas announced in September 2016 it had scheduled a football game against Missouri State in 2021, which later moved to Saturday night, it wasn’t major news.

No one could have guessed the game matching SEC and FCS teams would mark Bobby Petrino’s return to Reynolds Razorback Stadium.

Petrino, who had a 34-17 record at Arkansas from 2008-11, was in the third season of his second coaching stint at Louisville in 2016. The Cardinals finished 9-4 and quarterback Lamar Jackson won the Heisman Trophy.

But after Louisville started 2-8 in 2018, Petrino was fired.

In 2020, Petrino was hired at Missouri State, which he has led to the FCS playoffs the past two seasons and has ranked No. 6 in this week’s FCS coaches poll.

As improbable as it might have seemed a few years ago that Petrino would be going against Arkansas, it’s a scenario that has played out often in recent years with the Razorbacks facing one of their former coaches.

Petrino will be the fourth coach since 1999 who once led the Arkansas program to return to play the Razorbacks, and this will be the 12th such matchup in a 24-year span.

“It’s pretty crazy when you think about it,” Houston Nutt said.

Nutt has been on both sides of matchups involving the Razorbacks and their former coaches.

As Arkansas’ coach, Nutt faced Lou Holtz — his coach with the Razorbacks — six times from 1999-2004. Nutt’s Razorbacks were 4-2 in those matchups against Holtz’s South Carolina Gamecocks

When Nutt left Arkansas for Ole Miss, he and Petrino’s Razorbacks split four games between 2008-11.

Jack Crowe, who was fired one game into his third season as the Razorbacks’ coach when they lost to The Citadel 10-3 in 1992, faced Arkansas in the 2012 opener as the coach at Jacksonville (Ala.) State.

It was John L. Smith’s debut as Arkansas’ interim coach and the Razorbacks beat Crowe’s Gamecocks 49-24.

“When I was at Ole Miss, playing Arkansas was always one of the toughest weeks,” Nutt said. “The other coaches that have been at Arkansas and then played the Razorbacks, they weren’t invested with Arkansas the way I was.”

“I was born and raised a Razorback,” said Nutt, who now lives in McKinney, Texas, and works for CBS Sports. “So when we got ready to play Arkansas, I didn’t sleep much, because I was going back to a place that I gave my heart and soul.”

Nutt recalled when Ole Miss played at Arkansas in 2008, he made sure the Rebels didn’t take the field until the Razorbacks were running through the “A” formed by the UA marching band.

“We came out the same time as the Razorbacks, so the fans didn’t know whether to boo or cheer,” Nutt said. “There was a mixture of both, so that was really good for us.”

When Nutt became the Razorbacks’ coach, he found himself going against Holtz at South Carolina on an annual basis.

Holtz, who led the Razorbacks to a 60-21-2 record from 1977-83, appeared to have finished his coaching career with an 11-year stint at Notre Dame that included winning 100 games and the 1988 national championship.

But after being out of coaching for two years, Holtz took the South Carolina job in 1999.

“Going against Coach Holtz was very difficult because I had played for him, then worked for him,” Nutt said. “You have such respect for Coach Holtz. He’s a Hall of Famer.”

Holtz and Nutt both loved playing in Little Rock because of their success at War Memorial Stadium.

Holtz’s Arkansas teams were 22-3 in Little Rock and Nutt’s teams were 20-2 — including 3-0 against Holtz and South Carolina, highlighted by a 10-7 victory in 2001 when Carlos Hall blocked a last-second field goal attempt.

“I remember Coach Holtz would say before our home games, ‘Why are you making me come to Little Rock?’ ” Nutt said. “He hated playing us in Little Rock.”

Crowe, who had a 9-15 record at Arkansas between 1990-92, brought his Jacksonville State team to Fayetteville 20 years after The Citadel game with an assist from Petrino.

“I wasn’t thinking about The Citadel or what year it was, that it would be the 20th anniversary of that game,” Crowe told the Arkansas Democrat-Gazette in 2012. “I’m a football coach trying to do what I can for my team and my program.”

“We had an open date for a game, and we needed the revenue, “ Crowe said. “I knew somebody I could ask that I felt would try to help us, which Bobby did.

“This game is a result of Bobby being very kind to me. I don’t think we’d be playing this game if he hadn’t made it happen. There were a lot of other people he could have played.”

Petrino was replaced by Smith in 2012 after being fired by then-Arkansas athletic director Jeff Long as a result of an inappropriate relationship with a female staff member Petrino recently had hired and then lying about both being involved in a motorcycle accident.

“There’s no villain in this,” Crowe said in 2012. “A really good football coach, a good person, made some bad decisions and he’s paying one hell of a price now.”

Casey Dick, Arkansas’ quarterback for Nutt from the last four games of 2005 through the 2007 season, started for Petrino and against Nutt in the 2008 Arkansas-Ole Miss game.

“It was awkward playing Ole Miss, because very rarely do you have a coach leave a team, and then the very next season he’s coaching his new team against his old team in a conference game,” said Dick, the coach at Fayetteville High School. “A lot of the people on Coach Nutt’s staff at Arkansas went with him to Ole Miss, so we were facing people we’d built close relationships with over a period of time.”

“Coach Petrino was always intense, but he was no more intense for the Ole Miss game with us than he was for any other game that season,” Dick said. “I don’t think he wanted to draw more attention to the game, because he knew there already was a lot of attention drawn to it.

“Coach Petrino prepared us the same way and put a good game plan together.”

The 2008 Arkansas-Ole Miss game had a controversial ending.

Ole Miss hung on to win 23-21 after a 32-yard completion from Dick to London Crawford to the Rebels’ 21 with 51 seconds left was nullified by an offensive pass interference call against Crawford.

“He went up and caught the ball in his hands and they called offensive pass interference,” Petrino said in his postgame news conference. “I think everyone who saw the replay saw he did a great job of elevating and catching the ball.”

Petrino protested the call with officials when the flag was thrown, but chose his words carefully after the game.

“You know how this world is,” Petrino said. “There’s a thing called freedom of speech unless you’re a football coach talking about officials. Really, that’s all I can say, because if I said what I really would like to say, then I would get in trouble.”

Francis Schmidt, who led the Razorbacks to a 41-21-3 record from 1922-28, became the first former Arkansas coach to face his old team when he took a job at Southwest Conference rival TCU in 1929.

Schmidt, who also was the basketball and baseball coach at Arkansas, left TCU for Ohio State in 1933.

No former Arkansas coach faced the Razorbacks between 1933 and 1998 until Holtz ended that 66-year drought.

Now it seems to keep happening, though Dick figures that may be ending with the stability Sam Pittman has brought to the Arkansas program in his third season.

The Razorbacks are ranked No. 10 after ending the 2021 season No. 21. They’re 11-4 in their past 15 games with seven victories over teams that played in bowls last year.

“There’s been a lot of coaching transition at Arkansas, and that’s a part of why you’ve seen a lot of those matchups,” Dick said. “But I think with Coach Pittman, things are going to settle down. He’s going to be at Arkansas for a long time.”

Missouri State Coach Bobby Petrino will be the fifth former University of Arkansas Coach to face the Razorbacks when the Bears play at Fayetteville on Saturday night.

It will be the 15th game in which a former Arkansas coach has faced the Razorbacks, who are 7-7 in the previous matchups.

Here is a look at how Arkansas has done against its former head coaches:

NOTE Joe Kines, Arkansas' interim coach for the final 10 games in 1992, faced the Razorbacks four times from 2003-06 as Alabama's defensive coordinator. Arkansas went 3-1 in those games with Mike Shula as Alabama's coach.

CORRECTION: Houston Nutt's record at War Memorial Stadium was listed incorrectly. It has been corrected.