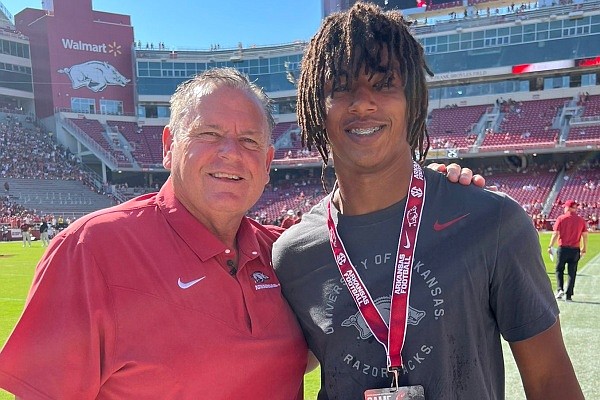 Being able to celebrate with the team and coaches after the Razorbacks’ 44-30 victory highlighted the trip.

“My highlight was probably going into the locker room after and talking to the coaches,” said Huff, who last visited Arkansas in January, "and how the atmosphere was. It was my first SEC game, so it was cool.”

Huff, 6-3, 228 pounds, had offers from Arkansas, Memphis and Arkansas State before Missouri jumped on board with an offer Monday.

He plans to visit the Tigers in Columbia this weekend and is looking to visit Oklahoma State on Oct. 22.

He noticed Razorbacks linebacker Drew Sanders being named national defensive player of the week by the Walter Camp Football Foundation on Sunday.

“He is a great player,” Huff said.

He finished with 10 tackles, 2 tackles for loss and 1 recovered fumble in a win over Rivercrest on Friday.

“It would be a great system to play in. They allow their linebackers to play freely so they can make plays,” he said.