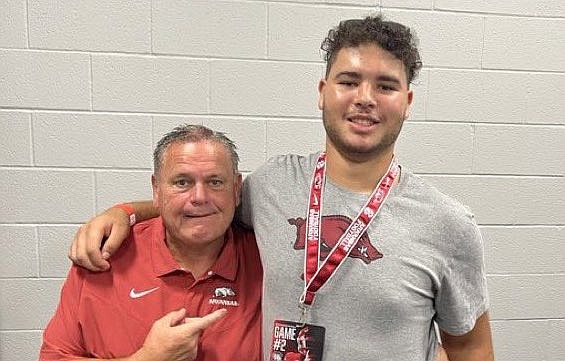 ESPN junior 4-star offensive tackle Fletcher Westphal was able to witness his first SEC home game while visiting the University of Arkansas for the South Carolina game, and he wasn't disappointed.

"Crazy energy around the game," he said.

The energy level surrounding and during the game impressed him.

"The only thing I can kind of compare the SEC and Arkansas home game energy to is like a Penn State whiteout," Westphal said. "But for a home game that's not a special event at 11 a.m. on a really hot day, no clouds out, the energy ... There it almost looked like more and more people were showing up throughout the game."

Westphal and his parents, Chris and Libby, spoke to Arkansas offensive line coach Cody Kennedy before having a lengthy talk with Coach Sam Pittman prior to the game.

"I came out late to the field before the game because I was talking to Coach Pitt the whole time," Westphal said. "I was with him maybe for 20-25 minutes and we ended up getting shooed out from talking because he had to do the pregame interview."

ESPN also rates him the No. 13 offensive tackle and the No. 172 overall prospect in the nation for the 2024 class. Pittman made sure to point out how much Westphal was wanted in Fayetteville.

" 'We want you guys,' " Westphal said of Pittman's conversation with him. " 'We want you to come here.' We got interrupted actually because the officials and the head coach had to have a talk."

Westphal, whose school is predominantly a running team, enjoyed watching the Hogs churn out 295 rushing yards against South Carolina.

"It's the main thing we do," Westphal said. "If you're not kind of relying on the O-line, which I'm just going to say it's the heart and soul of the team, you know the big boys."

One of his favorite highlights of watching line play was seeing offensive tackle Luke Jones dominate a Gamecock near the goal line.

"I just saw him just bulldoze, I mean bulldoze someone into the ground," Westphal said. "That's what you want to be doing as an offensive lineman."

Fletcher and his mother visited the Hogs in April. His father joined them on the latest trip.

"Having access to a head coach on game day is rare," Chris Westphal said. "Coach Pittman recognized Fletcher on the Hog Walk and they entered the stadium together. Before the game, we spent considerable time with both Coach Pittman and Coach Kennedy, talking about the team, the environment,and the opportunities.

"Fletcher also got onto the field and saw the players up close and was invited into their locker room to help celebrate the victory. All of these interactions clearly show Fletcher is a priority recruit to Arkansas."

Despite the early kickoff, the atmosphere impressed him.

"It was a great game-day experience," Chris said.

After the game, Fletcher and his parents explored Northwest Arkansas and had dinner in Bentonville.

"During the dinner the entire time they were just talking about they just liked the energy and they loved the game, the fans, the people," Fletcher said of his parents. "When we talk about Southern hospitality, you can't get much better than Arkansas. The environment, the area."

He also said a third visit to Arkansas is a possibility.

"Next spring, definitely a chance of me coming back," Fletcher said.