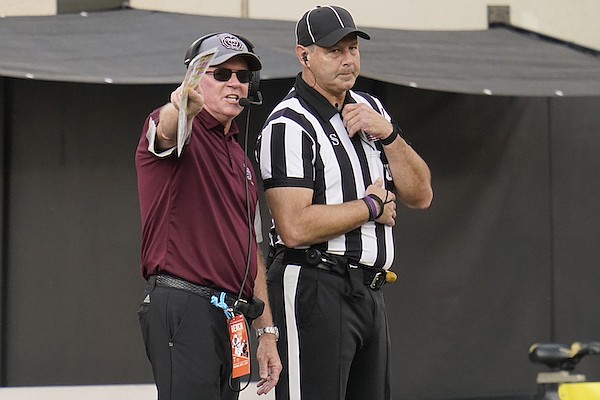 FAYETTEVILLE — The Arkansas Razorbacks know one of the best offensive minds in college football for the past quarter century is headed their way Saturday.

“The genius that Coach Petrino is offensively, we have to get ready to play,” Arkansas defensive lineman Isaiah Nichols said. “They’re a good team. They’re No. [6] in FCS, so obviously they’re a very well-coached team, a very good team offensively.”

Missouri State has the 17th-ranked passing offense in the FCS with 281.5 yards per game after wins over the University of Central Arkansas and Tennessee-Martin, the team that knocked the Bears out of the FCS playoffs last season. They are also 35th with 396 total yards per game.

Additionally, the Bears have committed just two turnovers, one more than the Razorbacks.

Shelley has not thrown an interception in 54 pass attempts and has completed 68.5% of his throws for 563 yards and 6 touchdowns. Those are the kind of prolific numbers Ryan Mallett and Tyler Wilson had when the Arkansas offense was humming under Petrino in 2010 and 2011.

Wideout Ty Scott, a 6-3 transfer from Central Michigan, already has 16 catches for 256 yards and 3 touchdowns, with all the scores coming last week. Tailback Jacardia Wright, a Kansas State transfer, has 158 rushing yards on 36 carries and averages 4.4 yards per rush.

“Their coach, Bobby Petrino, he’s a great coach,” linebacker Chris Paul Jr. said. “He’s a genius of the game. With him over that offense and things like that, they have some weapons in their offense with the running back and obviously the quarterback.”

The Razorbacks worked in full pads on a day that warmed up in the low 80s. There were no players in green, no-contact jerseys, though the No. 7s on both sides — tight end Trey Knox and safety Latavious Brini — looked slightly slowed by ankle injuries.

Nickel back Myles Slusher, who has an unspecified upper body injury, was not spotted in the workout, nor was cornerback LaDarrius Bishop, who is dealing with a knee injury.

Nathan Bax and Hudson Henry worked with the first and second group during fastball starts at tight end.

Marcus Henderson, who has recovered from a pectoral muscle injury that slowed him throughout camp, played second-team center, with true freshman Patrick Kutas moving from center to right guard with that group.

Dwight McGlothern and Malik Chavis worked at cornerback with the first unit during the fastball start.

KJ Jefferson completed his only pass in the three-play fastball start Tuesday. Jefferson found Ketron Jackson Jr. open over the left side for the reception. Jefferson had a keeper and a good run over the left edge on play No. 1, and Raheim Sanders ran over the right side on the next snap during the “thud” work.

Cade Fortin took reps with the second group at quarterback and went 2 for 2. AJ Green had a carry over the right side on the first snap. Fortin connected with Jaedon Wilson for a solid gain, then hit Harper Cole with a short comeback on the next two plays.

Linebacker Drew Sanders picked up another national award Tuesday as the junior was named player of the week by the Chuck Bednarik Award.

Sanders joined Ole Miss’ Greg Hardy as the only SEC defenders since 2000 with 10-plus tackles, 2 sacks, 2 forced fumbles and a pass breakup in a game.

Raheim Sanders was a finalist for the Doak Walker Award’s national running back of the week after running for a career-high 156 yards and 2 touchdowns on 24 carries against South Carolina.

The weekly award was given to Marshall’s Khalan Laborn, who had 163 rushing yards in a 26-21 upset at Notre Dame.

Sanders and Air Force’s Brad Roberts, who rushed for 174 yards and three touchdowns in the Falcons’ 41-10 rout of Colorado, were the other finalists.

When tailback Dominique Johnson returns and how much action he will see is going to be an open question, Sam Pittman said Monday.

Johnson, who is recovering from January knee surgery, has progressed since the week before the opener from wearing a green no-contact jersey with a knee brace to ditching the green jersey last week and the brace Monday. The 6-1, 247-pounder from Crowley, Texas, had a breakout sophomore year, with 575 rushing yards and a team-high seven rushing touchdowns.

“We have to watch it, because guys are practicing, you’re not,” Pittman said regarding Johnson. “You’ve got to get back in the flow of things. So I don’t know that we would upset the apple cart a whole bunch when he comes back early, the first time he comes back, because it’s not broke right now.

“At the same time, we’ve got a really fine football player that we’d like to get on the field. Once he becomes confident, I think I’ll be able to answer that question a little bit better.”

Raheim “Rocket” Sanders leads the SEC and ranks fourth nationally with 136.5 rushing yards per game. He has two touchdowns and he averages 6.2 yards per carry.

“Rocket’s big and physical,” Missouri State Coach Bobby Petrino said. “Last week’s game he broke a bunch of tackles. You’ve got to get a number of guys to the football and wrap up.”

Coach Sam Pittman called tailback AJ Green’s first run of the season, on which he motored through a hole for a 6-yard gain against Cincinnati, the best run of the sophomore’s career because of his decisiveness in the hole and his power.

“I would definitely say I feel way more comfortable this year,” Green said. “I feel like I’m better prepared for the season and I was able to get my body right for SEC football and I’ve just been feeling good, really.”