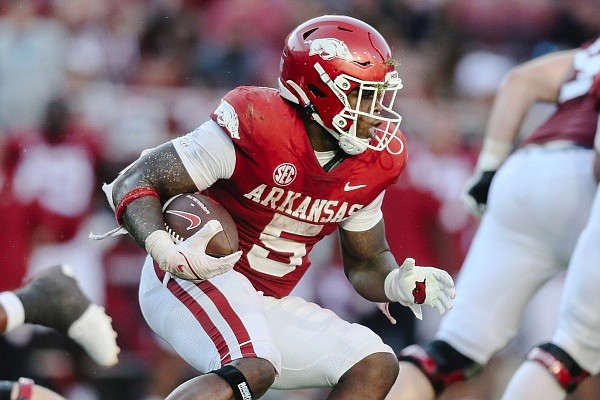 Arkansas running back Raheim Sanders (5) carries the ball, Saturday, September 3, 2022 during the fourth quarter of a football game at Donald W. Reynolds Razorback Stadium in Fayetteville.

In the celebrated aftermath of consecutive games rushing for 117 and 156 yards, Arkansas sophomore running back Raheim "Rocket" Sanders immediately credited what’s fueled him following the Razorbacks' SEC opener, a 44-30 win over the South Carolina Gamecocks.

Rocket, whose nickname supersedes his given name about like "Yogi" superseded Lawrence Berra, laid it on the line.

“I want to give a shout out to the offensive line and the receivers holding it down for me,” Sanders said for openers on postgame radio.”

Nearly all successful runs begin with the offensive line. Most long runs extend on a receiver’s block.

The line opened holes and the big, fast Rocket blasted through them. He tallied two touchdowns and a 47-yard run.

“Like I said,” Sanders said. “A big shout out to the offensive line.”

“Our offensive line is playing well,” Pittman said. “That includes (tight ends) Trey Knox and Nathan Bax. Our wideouts are blocking well on the outside. Kendal (Briles, the play-calling offensive coordinator) is really using the personnel that we have with the short throw game almost as a run.”

Recruited as a wide receiver, Rocket against Carolina took three catches for 30 yards check downs and screens from dual-threat quarterback KJ Jefferson. Jefferson completed 18 of 21 passing for 162 yards and a TD with no interceptions. He rushed 19 times for 67 yards rushing with a touchdown.

“He (Sanders) has good hands,” Pittman said. “If you’re running a draw, a shovel or a screen to kind of slow the pass rush down and we were able to do that a little bit with him today.”

With 519 yards rushing and 385 yards passing for their victories over then-23rd-ranked Cincinnati and South Carolina, the now 10th-ranked Hogs display admirable offensive balance.

It starts on the run. Even often operating uptempo, Arkansas clocked South Carolina’s offense to idleness. The Hogs hogged the ball nearly 35 of the game’s 60 minutes.

Presumably the Hogs overall have better athletes than the Bears of the Missouri Valley Conference, down a division at FCS.

Yet Arkansans recall Petrino assembles quickly high-scoring offenses with the best of them.

There’s not much even Petrino can assemble offensively if Rocket consistently blasts with fellow ball Hogs.

“Man, it’s good for me to not have to tackle him this time,” Blair said of game days. “He’s a load to tackle.”