Up to $40 million in building planned for UA soccer, softball 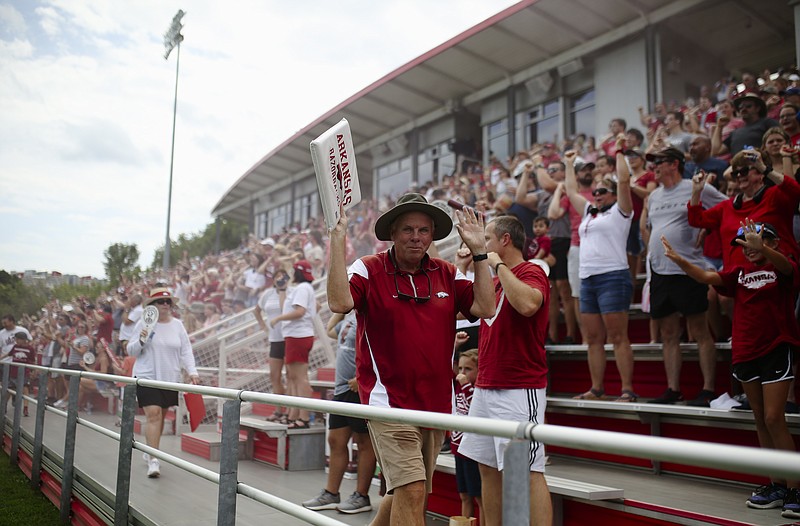 Fans are shown at an Arkansas soccer game against Michigan State on Sunday, Sept. 4, 2022, in Fayetteville.

FAYETTEVILLE — University of Arkansas officials are in the early stages of planning renovations to the Razorbacks’ soccer and softball facilities that will cost between $15 million and $20 million apiece, according to figures submitted to UA trustees.

The plans call for the construction of a new operations building for soccer and the expansion of an existing softball building that is used for indoor workouts. The new and renovated buildings will be similar to the Razorbacks' Hunt Baseball Development Center and O’Mara High Performance Track Center, which opened in 2021.

The new 27,000-square-foot soccer building would be built on the site of an existing field house on the north side of Razorback Field. About 21,000 square feet would be added to an existing softball structure on the west side of Bogle Park.

“We’re trying to create facilities for our softball and soccer programs that provide team rooms, locker rooms, training rooms, probably a shared weight room between those two sports in one of those complexes, and coaches offices,” Arkansas athletics director Hunter Yurachek said. “But 75% to 80% of the building that we do at Bogle Park and what we do at Razorback Field will be for student-athletes.”

A timeline for the building projects is preliminary, but Yurachek said the earliest either would begin is the end of those teams’ seasons during the 2023-24 school year. Soccer is a fall sport and softball competes during the spring.

UA trustees last week approved architects, design teams and construction managers for the projects. Designs and costs are expected to be approved by next summer.

As part of the soccer project, the east side of the field would be overhauled. New premium-seating options would be constructed atop team dugouts, a concept similar to some European soccer stadiums, Yurachek said.

The goal, Yurachek said, is to increase soccer capacity to around 2,500. The listed capacity at Razorback Field is 1,500 and the team averaged 1,537 fans per home game last season.

A 2021 home game against BYU had an announced attendance of 2,370. Overflow crowds typically include many spectators watching from a grass berm on the north end.

“We’re able to use the grass space right now, and so how can we maximize the grass space that we currently have by the current grandstand?” Yurachek said. “And then…what will we do to enhance that with this new building structure? All of that will be part of the design process, and we'll start here in the next 30 days.”

More subtle changes have already begun to take place at the soccer stadium. During the Razorbacks’ long road swing that concludes with the SEC opener at Mississippi State on Friday, new chair-back seats were to the grandstand on the west side.

Other planned soccer renovations include a new grass field and a new video scoreboard. A pedestrian route from the parking lot adjacent to the stadium will also be improved.

Colby Hale, the 11th-year soccer coach whose 135 victories are a program record, called the proposed changes “world class.” He said he wishes past players could experience playing at the renovated stadium.

“We’ll make sure that they feel that they're a part of it,” said Hale, whose team is ranked 14th in this week's United Soccer Coaches poll. “They helped build that, for sure.”

Arkansas’ soccer and softball programs have become nationally competitive in recent years under the leadership of Hale and softball coach Courtney Deifel. The softball team has hosted NCAA super regionals the past two seasons and the soccer team played in its first Elite Eight last season.

“We’re starting to chip away at our facilities master plan and soccer and softball are next in line,” Yurachek said.

The athletics facilities master plan was completed in 2011 under former athletics director Jeff Long. Yurachek was hired to replace Long in December 2017.

“There have been some, I would say adaptations from myself to that and prioritizing some facilities such as for the soccer and softball teams that are having a high level of success right now,” Yurachek said. "They need some upgrades to their facilities to ensure that that success continues.”

Additional softball renovations will include upgrades to restrooms, ticketing and concession areas, and the entrance to Bogle Park will be redesigned.

Deifel, whose 238 victories at Arkansas since 2016 are six shy of the program record, said she is already recruiting on the promise of the expanded facility.

“This 2024 class that we could just start recruiting, being able to sit down with them and say, ‘This is going to happen…and it's going to be here for you,’ it's huge,” Deifel said.

“It’s going to add just a lot more space for our team. In the last few years we've just kind of felt like we were busting at the seams a little bit. It’s just another way, I think, of what Hunter and our department and university have done, just making sure we're at the forefront of the SEC, which puts us at the forefront nationally. I'm really, really excited to begin this process. It's exciting for our program.”