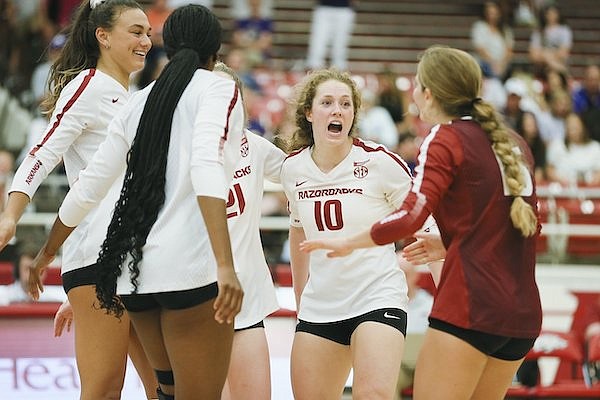 Arkansas' Jillian Gillen (10) celebrates with teammates during a game against Washington on Saturday, Aug. 27, 2022, in Fayetteville.

FAYETTEVILLE — The University of Arkansas volleyball team picked up a marquee win over then-No. 8 Washington less than three weeks ago, but the Razorbacks get a crack at another when they host No. 7 Georgia Tech tonight at Walton Arena.

First serve against Georgia Tech (6-1) is slated for 7 p.m. as part of the Arkansas Challenge. The Razorbacks (7-1) also host North Carolina State on Friday at 7 p.m.

The Yellow Jackets are led by senior Julia Bergmann, who leads the nation in kills per set (5.54) and points per set (6.33). The 6-5 outside hitter was named first-team All America by the American Volleyball Coaches’ Association last season. She also claimed Atlantic Coast Conference Player of the Year honors.

“They have one of the marquee outside hitters in college volleyball right now,” Watson said. “She spent the summer playing … the highest level of international volleyball you can play and she played it for Brazil, which is one of the best teams in the world.

“We’re eager and ready. This team is pretty motivated. … I think we’re in pretty good shape.”

Arkansas’ lone loss came to Washington a day after knocking off the Huskies in four sets.

Watson said it seems forever ago since his team knocked off Washington, but the Razorbacks have improved. However, he wasn’t sure about comparing Washington and Georgia Tech.

“I think we’re playing a little bit better volleyball than we were in August,” Watson said. “I don’t know if I can draw comparisons between the two programs. … Certainly Georgia Tech is every bit as good, maybe a little better in some areas than Washington. That opening weekend was a pretty big confidence boost for our team for sure.”

The Razorbacks have cracked the top 25 for the first time in seven years. They briefly entered the rankings in 2015 after they defeated No. 9 Florida, but fell out the following week after a road loss. This weekend will mark the first time that a ranked Arkansas team will host another ranked team at home since 1998.

The Razorbacks open SEC play at LSU next Wednesday.