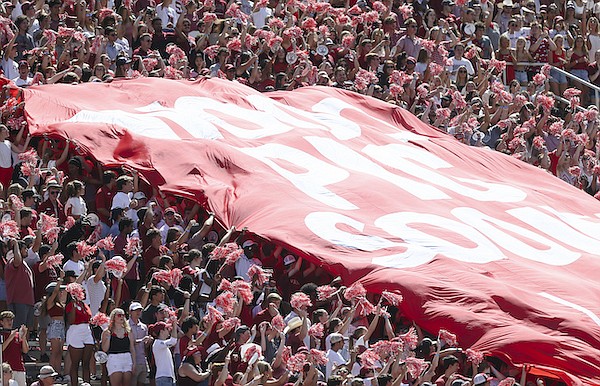 Arkansas fans are shown during a game against South Carolina on Saturday, Sept. 10, 2022, in Fayetteville.

WHERE Reynolds Razorback Stadium (76,412) in Fayetteville

COACHES Arkansas: Sam Pittman — 14-11 in third season at Arkansas and overall in Division I; Missouri State: Bobby Petrino — 15-9 in second season at Missouri State and 134-65 in 17th season overall.

RADIO Razorback Sports Network can be accessed through local FM and AM affiliates, via the Arkansas Razorbacks Gameday app, via the TuneIn app, via the Varsity app or on ArkansasRazorbacks.com. Blackouts may apply. The Arkansas radio broadcast will be carried on XM Ch. 109/205.

TELEVISION The game will be streamed on ESPN-Plus and SEC Network-Plus, and can be be accessed via WatchESPN.com and the ESPN app (carrier or subscriber login required).

WEATHER According to the National Weather Service, Saturday night will be mostly clear in Fayetteville with a high of 89 degrees and a low of 68.

BETTING LINE Arkansas is a 28 1/2-point favorite, according to OddsShark.com.

NOTABLE Missouri State coach Bobby Petrino coached Arkansas to a 34-17 record from 2008-11. Saturday will be Petrino's first game at Reynolds Razorback Stadium since he was fired as Arkansas' coach for misconduct in April 2012....Missouri State has played in the playoffs of the NCAA Football Championship Subdivision in the past two seasons. Both playoff appearances ended with first-round losses. The Bears had not made the playoffs in 30 years prior to the 2020-21 season, Petrino's first with the program....Arkansas has a 17-game winning streak over FCS teams. The Razorbacks' only loss was 10-3 to The Citadel in the 1992 season opener when FCS was referred to as Division I-AA....Missouri State is 0-2 against FBS teams under Petrino with losses of 48-0 at Oklahoma in 2020 and 23-16 at Oklahoma State last season....Missouri State quarterback Jason Shelley was the Missouri Valley Conference offensive player of the year and finished 10th in the voting for the Walter Payton Award in 2021. The Payton Award is presented to the best offensive player in FCS....Arkansas is 7-1 in its last eight games in Fayetteville....Saturday is the Razorbacks' home game that has been designated only for streaming. As part of the SEC's contract with ESPN that was announced in December 2020, each team will have one home game that is only available via streaming each season....Former Arkansas safety Tramain Thomas is an assistant coach at Missouri State....The Bears' last two meetings against the Razorbacks came with Petrino as Arkansas' coach. The Razorbacks won those games 48-10 at War Memorial Stadium in 2009 and 51-7 in Fayetteville in 2011.