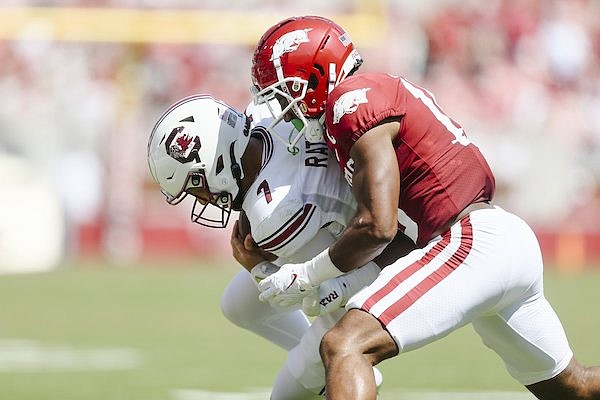 FAYETTEVILLE — Hard lessons learned during the covid crisis are paying off now for the University of Arkansas defense.

Defensive coordinator Barry Odom, who has seen the benefit of cross training in the defensive backfield over the years, is watching that work pay off for the No. 10 Razorbacks (2-0), who host pass-happy Missouri State (2-0) under Coach Bobby Petrino on Saturday at 6 p.m.

The Razorbacks have been struck by an injury bug in the secondary through two weeks this season but have profited from the extensive work they’ve invested in making sure their defensive backs can rotate positions, largely between safety and nickel back, and can handle both the boundary and field sides.

Preseason All-America safety Jalen Catalon has been lost for the season after needing reconstructive shoulder surgery. Starting nickel back Myles Slusher sat out last week’s 44-30 win over South Carolina with an upper body issue after dropping a much larger tight end with a massive shot in the 31-24 win over Cincinnati in the opener. Slusher is questionable against the Bears.

Cornerback LaDarrius Bishop (knee), a nine-game starter in 2021, is out for at least this week. Latavious Brini, an 11-game starter for national champion Georgia last year, injured an ankle last week while starting in Catalon’s spot. He’s likely to be available Saturday.

Among the preseason top seven or eight players in the secondary, only corners Hudson Clark and Dwight McGlothern and safety Simeon Blair have gone relatively unscathed. Jayden Johnson, who started at nickel last week, Malik Chavis and Khari Johnson have bounced into different roles as needed.

“It is what it is. You hate it, but it’s a physical sport, and that’s why they pay us a lot of money, so we can get guys ready to play and recruit players for depth.”

Odom made sure defensive backs were versatile during the 2020 season when covid issues made week-to-week depth a tricky proposition. Additionally, the Razorbacks have stocked up on defensive backs in recruiting, giving Odom and cornerbacks coach Dominque Bowman more options with the current concerns.

Spencer Rattler stung the Hogs’ secondary with 376 passing yards among South Carolina’s 416 total yards. The Gamecocks had two pass plays of 50-plus yards: A tackle-breaking catch and run by MarShawn Lloyd that covered 43 yards, a short strike that turned into a 38-yard touchdown for Antwane Wells Jr. and four other pass plays that covered between 15 and 19 yards.

So while the Razorbacks have had the personnel to adapt to the string of injuries, they need to coalesce better and improve their coverage and tackling if Arkansas is to remain a contender in the SEC West.

“We covered well at times and we covered poorly at times. We just have to become more consistent. I think we can do that. But with the first week of losing two of your top defenders and coming out with a win like that and fighting and scrapping, I thought it was good.”

Arkansas ranks last in the SEC and 129th among the 131 FBS teams in allowing 350.5 passing yards per game. The Hogs are 101st in permitting 10.69 yards per completion.

The flip side to those statistics can be found in the Hogs’ rush defense and pass rush numbers.

Arkansas is third nationally with 4.5 sacks per game, 18th with 8.5 tackles per loss per game and 19th with 76.5 rushing yards per game allowed. Putting more pressure on quarterbacks and playing more man defense was a built-in part of Odom’s master plan for the season.

While both Cincinnati’s Ben Bryant and Rattler struggled to hit open targets on deep balls, Petrino pointed out a reason why those big plays can be hard to come by.

Pittman said there have been ongoing discussions about how to further implement personnel in the secondary. He said Clark might have the ability to play spots other than corner, while McGlothern and Keaun Parker, who could get his first substantial work Saturday, are more locked in at cornerback.

The Hogs’ defense will face a crafty quarterback in Jason Shelley, a former Utah and Utah State player, who was the Missouri Valley offensive player of the year in 2021 and a preseason FCS All-American.

Shelley (37-54-0, 563 yards, 6 TDs) has a 192.76 passer efficiency, which ranks third in the FCS, and lots of weapons around him, including wideouts Ty Scott, Jahod Booker, Springdale’s Hunter Wood and former Razorback Jordan Jones, and tailbacks Jacardia Wright and Celdon Manning.

“He can run and pass and he’s a very good player,” Pittman said of Shelleyt. “He’s got some good talent around him. Their philosophy, it seems to me like they want to run the ball. … But they’re going to stretch the field vertically.

“We have to be ready for all the different personnel groupings and understand what they like to do out of them. But he runs the show. Again, a very good athlete. He can run and has a very good arm. We have to keep him locked up in that pocket. We’ve got to get to him. If we don’t, he’s very accurate with the ball and has some really good wideouts.”