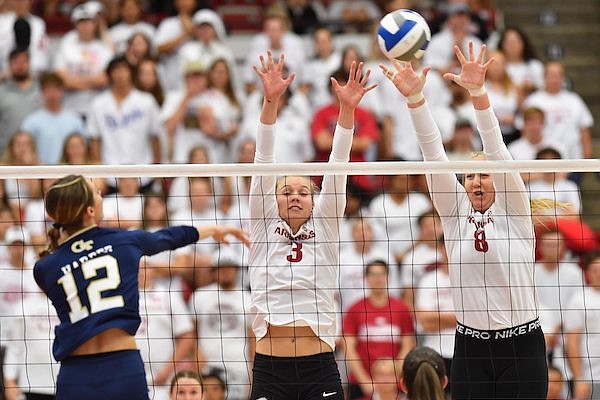 Georgia Tech's Leia Harper (12) sends the ball over the net Thursday, Sept. 15, 2022, as Arkansas' Hailey Dirrigl (3) and Tatum Shipes (8) defend during play in Barnhill Arena on the university campus in Fayetteville.

FAYETTEVILLE — The University of Arkansas volleyball team was kept out of the NCAA Tournament last season because it was lacking a significant win according to the selection committee.

Arkansas’ Jill Gillen, Taylor Head and Hailey Dirrigl each reached double figures in kills, led by Gillen’s 18 kills and 12 digs. Head added 14 kills and Dirrigl 12 as the Razorbacks hit an eye-popping .312 as a team while holding Georgia Tech to just .213.

Arkansas (8-1) sliced an eight-point deficit to one in the second set, but an Arkansas service error gave the Yellow Jackets the win to tie the match at a set apiece. But the Razorbacks took care of business in the final two sets, trailing only briefly.

Georgia Tech’s Julia Bergmann finished with a match-high 19 kills, but hit only .246. The 6-5 senior first-team All American came into the match leading the nation in kills per set (5.54) and points per set (6.33).

“I’m happy for these kids, for the kids who have been in this program for a long time because they’ve weathered some storms and had to go through some stuff.”

The Razorbacks trailed by nine in that second set, but clawed back to within one multiple times before falling. They came up with a 25-22 win in the third, but took the lead late when Arkansas won a challenge for a Georgia Tech touch was called to give the Razorbacks the lead for good at 20-19.

“And then I thought we played really patient, clean volley from there on out,” Watson said. “Taylor’s been carrying us a little bit, but I thought Jill was good tonight and Maggie [Cartwright] and Hailey was unbelievable. She had to take some big swings against number 17 [Bergmann], who is a really good volleyball player.

The Razorbacks face North Carolina State tonight at 7 to finish play in the Arkansas Challenge.

Dirrigl said the group was calm, but excited to play.

“In the locker room, we were all highs,” Dirrigl said.

But she also said the group has work left to do this weekend against North Carolina State.

“We’re not going to negate this win, but come midnight we’re going to restart and we’re going to get right back to it and prep for NC State,” Dirrigl said. “Then we can celebrate both wins.”

Thursday’s match was the first time a ranked Arkansas team played another ranked team at home since 1998.