Self-sufficient with easy speed, Landers one Hogs can count on 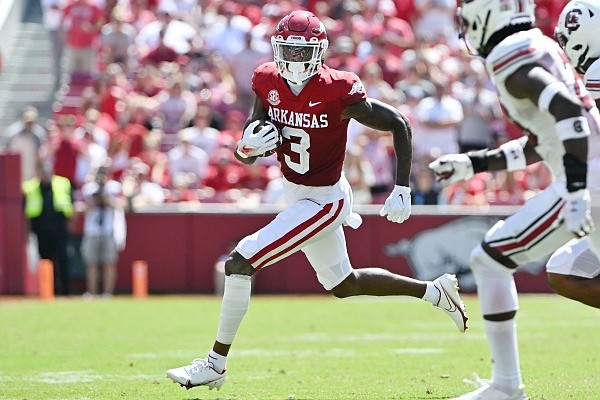 FAYETTEVILLE — Joe Fabrizio is enjoying spending time these days with his grandkids, occasionally taking them to high school football games on Friday nights and finely manicuring the lawn at his home.

He retired from coaching in January 2020 following a 38-year run in which he led programs in Pennsylvania, Louisiana and Florida. Fabrizio teaches special education at St. Petersburg (Fla.) High School, the very place that saw his teams win 90 games — including 36 from 2008-11 — over 14 seasons.

In his new-found free time, he also plans to watch a few more Arkansas football games than in previous years. He has a personal interest in the Razorbacks in 2022.

Matt Landers, a wide receiver transfer who began his college career at Georgia before leaving for Toledo and then Arkansas, was a one-year standout under Fabrizio at St. Petersburg. As a senior, he caught 40 passes for 719 yards and 7 touchdowns.

In their stint together, Landers made quite the impression on Fabrizio, who first learned of the talent the receiver possessed when he coached against Landers at another school years prior. The numbers Landers posted in his final prep season were especially stellar considering the Green Devils were a Spread Wing T offensive team.

“I never saw a kid that big, that fast with the hands to catch the football, jumping ability, wingspan, you name it. You see him,” Fabrizio said. “The kid was born with tremendous athleticism.

“When you look at Matt in a high school setting and you see him walking down the hall, you just look at him like, man, that kid could probably do anything he wants athletically.”

More from WholeHogSports: 10 keys to victory in Arkansas-Missouri State

Arkansas coach Sam Pittman knew of Landers’ gifts from his time as Georgia’s offensive line coach. Their relationship — plus a cast of other familiar faces from Georgia — assisted the Razorbacks in landing the receiver out of the NCAA transfer portal in May.

Through his first two games, Landers leads Arkansas with 88 receiving yards on 7 catches, and he also has 1 carry for 6 yards. The Razorbacks are hopeful he will blossom in the SEC into the explosive weapon Fabrizio faced and coached. He led Toledo with 25.7 yards per reception in 2021.

Fabrizio had more than an inkling that Landers would be just that at the high school and college levels as he developed. The foundation was firmly in place as one of the top athletes in the area.

His first recollection of Landers is from his freshman year during the junior varsity season. Taking a direct snap as a Wildcat quarterback, Landers cut upfield and out-ran Fabrizio’s group despite the play being defended about as well as possible.

“He was a freak,” Fabrizio said. “I thought then that this kid was going to be something eventually. Then his sophomore season we played him and he was at receiver at that point. He was bigger, more athletic than most receivers are in high school.

“We tried to put as much pressure on the quarterback as we could so you couldn’t get the ball out to him. His wingspan, his ability to jump — if the quarterback could just get it out of his hand in Matt’s direction then the kid was going to win a 50-50 ball 100% of the time.”

Once Landers transferred in to Fabrizio’s program, the coach used him at receiver, as a Wildcat quarterback at times and in the secondary in third- and fourth-and-long situations simply because he was able to effectively cover sideline to sideline. But before he showcased game-changing ability at St. Petersburg, things got off to a slow start.

Prior to the Green Devils’ Kickoff Classic, Landers and a few other senior starters arrived late to the team’s locker room on game day. Fabrizio’s long-standing rule is if a player does not show up on time, he will not play.

Though it served as a learning experience, Landers’ character, Fabrizio said, allowed the situation to turn into a positive when all was said and done. Landers made no excuses for his tardiness and he apologized to the team on his own.

“It was a mature thing to do,” Fabrizio said. “High school kids will always blame something — the car broke down, Mom yelled at me, whatever — but he wasn’t that way. He owned up to what happened, took his punishment. At that point I knew he was a kid I could count on.

“As a high school coach, you have kids at all levels of maturity. You have kids you look at and make sure they get to class and walk them from here to there. Matt was not that kind of a student. He was never going to be a behavior problem. If something happened at practice and he made a mistake, he owned up to it.”

Landers’ self-sufficiency again jumped to the forefront not long after joining the Razorbacks. Second-year starting quarterback KJ Jefferson said he received a phone call from Landers asking if he would meet him at Arkansas’ team facility.

The duo got to work right away. In two games, Jefferson is 7 of 9 passing when looking Landers’ way. They have hooked up for three plays of 15-plus yards.

“I was watching him run routes, how he’s going to run his routes and trying to get timing down as quick as possible,” Jefferson recalled of their first workout together. “Knowing that he’s an outside guy coming in, I mean, the team loves him. We welcomed him with open arms.

Landers, who enrolled in June, did not go through spring practices with the Razorbacks, so he was among the most-asked-about players on Arkansas’ roster in the preseason. He was a name generating plenty of buzz through big plays in workouts and team scrimmages.

And essentially every player and coach who detailed the receiver’s play or style referenced elite speed. Asked if there is a technical aspect to Landers that makes him the player he is, defensive back Malik Chavis gave a memorable answer.

Georgia transfer Latavious Brini has nicknamed the receiver "Slim" based on his stature, and safety Simeon Blair and others have labeled him "The Gazelle." Both defensive backs say he is a legitimate weapon.

And they are happy about the fact other players now have to defend him on a weekly basis.

“Matt, man, he’s a dog," Brini said. "Matt is going to come in and work. You can catch Matt after practice catching like 100 balls on the Juggs. Matt is just going to work, and I love that about Matt.”

If you ask Fabrizio, his former star’s route running has improved significantly since his days at St. Petersburg High. In Landers’ prep years, receptions often came as easy as simply boxing out a 5-8 cornerback, and dusting defenses was standard.

The year before joining Fabrizio’s program, he totaled 1,038 yards and 15 touchdowns at Admiral Farragut Academy, a roughly 12-minute drive west of St. Petersburg High. In college, particularly at Georgia, nothing came as easy for Landers.

“I know when he got to Georgia, I think it was a little bit of a surprise that everybody was as big and as fast and as strong as he was,” Fabrizio said. “In high school you could just kind of walk out there and be better than everybody else, and I think that’s forced him to become a better football player.

“He’s progressed through college and had to compete a little bit more against people that were just as good as he was at the receiver position and defensive back position.”

When Landers committed to the Razorbacks following a 514-yard and five-touchdown season at Toledo, Fabrizio told him Arkansas quickly became one of his favorite teams. He said he does not often get Razorbacks games on TV where he lives, but he will watch No. 3 in red whenever possible.

Landers, who stands 6-5 and 197 pounds, is the first member of his family to go to college. Being an athlete in addition to a student was initially overwhelming and a challenging adjustment, but personal growth pushed him to this stage in his life and football career.

“I feel like I’ve adjusted well,” Landers said of his time at Arkansas. “These guys are like my brothers. They took me in with open arms. They just made me feel welcome. I didn’t really come here looking for anything in particular.

“Just the hard work I’ve been putting in, the coaching staff has been behind me. It’s been great.”

Pittman, in his time at Georgia with Landers, did not get to know the receiver all that well given they did not share a position group. But what he knew was Landers was fast and a good person.

Their relationship has grown since Landers' June enrollment.

“He’s a very quiet and business-like personality, a mature guy,” Pittman said. “Obviously I’ve had more time to visit with him and talk to him and I’ve tried to be of help to him.

Fabrizio can attest to that. He said people who don’t know Landers in the manner he does sometimes get the impression that he is distant or even stuck up. Far from it, he said.

The coach’s rebuttal is that Landers owns a quiet confidence and humble nature. Those qualities are essential to the path he chooses in the future.

“I think he has all the ability and intangibles to be an NFL football player,” Fabrizio said. “I’ve never coached a receiver with his ability.”