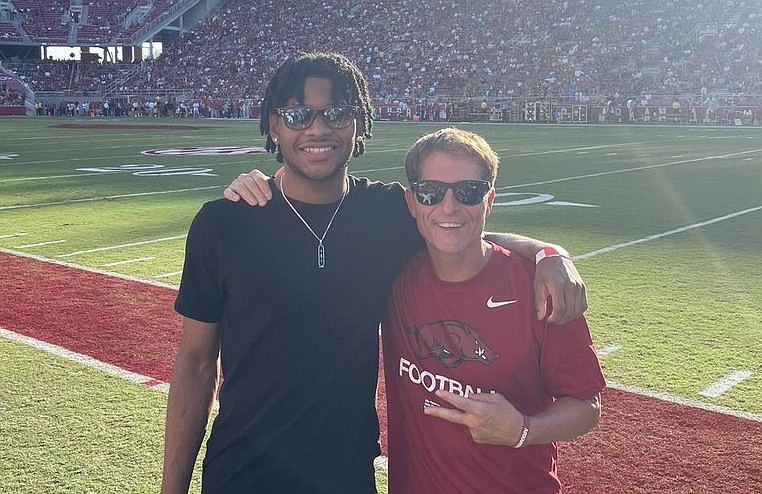 FAYETTEVILLE— Class of 2024 ESPN 5-star basketball prospect David Castillo made his second visit to Arkansas on Saturday and he’s glad he did.

“I love coming up here,” Castillo said. “The atmosphere in the gym and just the whole experience is just amazing. I love seeing everybody in there engaged, everybody in there locked in, ready for what they want to become which is a national championship team. It’s really exciting to get up here.”

He visited the Razorbacks for the football game against Texas last year. His latest trip to Fayetteville helped him learn more about the program.

“I learned a lot even like in just practice,” Castillo said. “The coaches brought up into a little meeting room and they talked about how they could use me in situations, and how my style of play fits their style of play, and I thought it was pretty cool.”

ESPN rates Castillo the No. 1 point guard, No. 8 overall prospect in the nation in his class and the No. 1 recruit in Oklahoma.

"Castillo plays best with the ball in his hands as a scoring playmaker," ESPN national recruiting director Paul Biancardi said. "He shoots and scores the ball the ball at a high clip. After evaluating his game early in his career it’s evident he plays a mature game.

"He will read the floor, locate help and strive to make the right play. A major threat in ball-screen actions and isolation scenarios. He displays a clever and somewhat shifty style to keep defenders off balance and still make the assist."

Arkansas coach Eric Musselman and his staff have 52 years of NBA experience and that was noticeable during Saturday’s practice.

“Just how NBA level it is, like the intensity,” Castillo said. “You watch other colleges and you see their practices and you’re like ‘Whoa!' You see why they’re such good team because everything they do is with urgency and no wasted movements. Everything is with a purpose and they try and get things done.”

He played up for 17-under Team Griffin on the Nike EYBL circuit during the spring and summer. He has a good dose of international experience as a member of the USA Men’s U17 World Cup Team this summer. He scored 12 points and had 1 rebound, 1 assist and 1 steal in the 79-67 victory over Spain to help USA win Gold.

He was one of 12 players selected to compete in the 2021 FIBA Americas U16 Championship in Xapala, Mexico, last summer.

“It’s non-stop really,” he said “I love talking to Coach Ruta, talk to Coach Muss a lot. I love hearing from them.”

ESPN 4-star small forward prospect Dallas Thomas of Little Rock Parkview also visited Saturday. He and Castillo met last year while visiting for the Texas game and have bonded since.

"I would obviously love to come here and play with Dallas,” Castillo said. “When I decided to come up here for an unofficial, I told Dallas, 'Yeah I’m coming up this time, come up here with me.'"