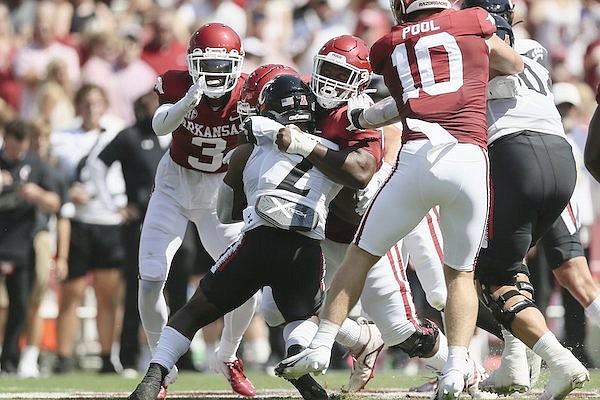 Arkansas defensive lineman Terry Hampton (center) makes a tackle during a game against Cincinnati on Saturday, Sept. 3, 2022, in Fayetteville.

FAYETTEVILLE — The Arkansas Razorbacks are keeping fresh defensive linemen on the field.

Through the University of Arkansas’ first two games, eight linemen have played at least 43 of the defense’s 142 snaps heading into today’s game against Missouri State at Reynolds Razorback Stadium.

“I think that really helps us being able to give 100% every play throughout the whole game,” senior tackle Isaiah Nichols said. “I really enjoy not having the weight of the whole game on myself or any of the other guys by themselves.

“It’s good knowing we have depth and guys that can go in and get the job done.”

“I think our philosophy is to keep the freshest guys out there,” Arkansas Coach Sam Pittman said. “That’s a good philosophy if you have two-deep. It’s not very good if you don’t.”

Junior guard Brady Latham has 25 starts for Arkansas’ offensive line, so he knows all about playing against SEC defensive linemen.

“We have an awesome D-line,” Latham said. “We go up against them [in practice] every single day, so I have a really good feel for them. We have a lot of guys with a lot of different strengths.”

Deke Adams, in his first season as the Razorbacks’ defensive line coach, said in training camp he would rotate as many players who show they’re ready to contribute.

“Coach Adams, he’s a seasoned veteran,” Nichols said. “He knows what he’s doing. He knows the game of football and he knows what it takes to have a successful D-line.”

Hampton, Domineck, Jackson, Stewart and Williams each have at least one tackle for lost yards. Gregory has two quarterback hurries.

Domineck has two sacks for 20 lost yards. He was the co-SEC Defensive Lineman of the Week when he had a forced a fumble on a sack and recovered the ball in Arkansas’ 31-24 victory over Cincinnati in the opener.

Last week Domineck was credited with a sack when Arkansas beat South Carolina 44-30. Quarterback Spencer Rattler was called for intentional grounding on the play, and he was in the end zone, resulting in a safety.

Domineck’s Pro Football Focus pass rush grade is 83.6. Hampton has been strong against the run with an 81.6 grade.

“To be honest with you right now, I don’t know a whole lot of difference — if any — from the ones that run out there and the twos that run out there, production-wise,” Pittman said. “I would bet you there’s not much difference in that as well, which was once what might be considered not a strong suit for us.”

Gregory, Nichols and Williams each are in their fourth season at Arkansas and Stewart is in his third.

Domineck (from Georgia Tech), Hampton (Arkansas State University) and Jackson (LSU) came to the Razorbacks through the transfer portal.

“I welcome that,” Gregory said in training camp when asked about the transfers. “We lose D-linemen, we need D-linemen. I try to give knowledge that I can. I try to take from them what they know to my game.”

Nichols said this week he has a positive attitude about the transfers.

“I don’t feel threatened in the sense where, ‘Aw, [the coaches] don’t believe in me, and this and this and that,’ ” Nichols said. “If we need help, we need help. If I start or don’t play and those guys are ahead of me and they’re playing more than me, then that’s on me.

“I have to go out and put the work in. I have to show Coach [Adams] that he can trust me to be in the game and do my job and do it efficiently, at the highest level possible.

“So I’m all for bringing more guys in, because obviously we wouldn’t bring people in if we didn’t need them. All the new guys we brought in, we have a good brotherhood in the D-line room.

“We all get along together well. We all feed off each other. I think they all play a very vital, key role in this defense.”

Pittman said it speaks well for the returning players to embrace the competition and build camaraderie with their new teammates.

“Each kid’s got to have that feeling on their own,” he said. “I think it shows about our program, and people understanding if you want to run out there with the first group, you’ve got to earn that.

“I think they believe we’re going to bring in good-character kids. I think a lot of that is on the guys we bring in as long as they’ll come in and work.

“We don’t give anybody anything. We don’t give them a spot — they have to earn it. Once that happens, I think it’s just a much easier transition between the new kid coming in and the team itself.”