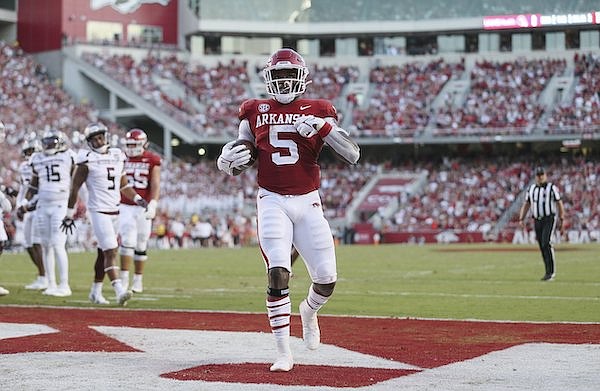 Arkansas running back Raheim Sanders (5) scores a touchdown during the second quarter of a game against Missouri State on Saturday, Sept. 17, 2022, in Fayetteville.

FAYETTEVILLE — Arkansas survived its biggest football scare in a while Saturday.

The 10th-ranked Razorbacks rallied from deficits of 17 points before halftime and 10 points in the fourth quarter to beat Missouri State 38-27 at Reynolds Razorback Stadium. The Bears, ranked fifth in the Football Championship Subdivision, were led by Bobby Petrino, who made his return to Fayetteville 10 years after he was fired as Arkansas’ coach.

The Razorbacks (3-0) used two big plays over a 2-minute, 22-second span in the fourth quarter to take command and fire up an announced crowd of 74,133.

Running back Raheim Sanders’ 73-yard touchdown up the middle on a shovel pass from quarterback KJ Jefferson pulled Arkansas within 27-24 with 11:38 remaining. Following a three and out on Missouri State’s ensuing possession, Bryce Stephens returned a punt 82 yards for a touchdown to give the Razorbacks their first lead with 9:16 to play.

Stephens’ punt return was Arkansas’ longest since Joe Adams’ 97-yard return during a game against Ole Miss in 2010. Adams, who played for Petrino, was recognized on the field earlier in the game as a member of this year’s hall of honor class for former Razorback players and coaches.

Jefferson scored on a 1-yard quarterback keeper with 1:39 remaining to set the final score. The touchdown was set up by a 43-yard run by Sanders to the Missouri State 5.

Sanders set a career high in rushing for the third consecutive game with 167 yards on 22 carries. He also had 75 receiving yards and scored twice.

Jefferson finished 19 of 31 for a career-high 385 yards and 2 touchdowns, and was intercepted once. Matt Landers was on the receiving end of seven passes from Jefferson and had a season-high 123 yards.

Missouri State (2-1) capitalized on two Arkansas turnovers in the first half to build a 17-0 lead in the second quarter. The Bears scored on three consecutive drives, including a 28-yard Jose Pizano field goal to go ahead 10-0 following a fumble by Sanders after Arkansas had reached the Missouri State 1.

The Razorbacks committed three turnovers and were also stopped on downs inside Missouri State territory in the second quarter.

The Bears went ahead 7-0 after Jacardia Wright’s 1-yard touchdown run to cap a 12-play, 64-yard drive with 2:47 remaining in the first quarter.

Missouri State took a 17-0 lead when quarterback Jason Shelley rushed for a 24-yard touchdown on third down with 10:36 to play before halftime.

The Razorbacks tied the game on Cam Little’s 27-yard field goal with 5:36 left in the third quarter, but Missouri State responded with 10 consecutive points.

Shelley found Ty Scott for a 47-yard touchdown pass late in the third quarter to put the Bears ahead 24-17. Pizano tacked on a 31-yard field goal with 12:04 remaining in the fourth to give Missouri State a 10-point lead.

Arkansas started the next drive from its own 25 and scored two plays later on Sanders’ receiving touchdown. The Razorbacks never looked back and scored the game’s final 21 points.

The Bears totaled only 42 yards in the final 15 minutes on an otherwise strong night on offense. Arkansas out-gained Missouri State 597-409.

Shelley, who began his college career at Utah, completed 24 of 43 passes for 357 yards and 1 touchdown.

The Razorbacks are scheduled to play 24th-ranked Texas A&M next Saturday night at AT&T Stadium in Arlington, Texas.