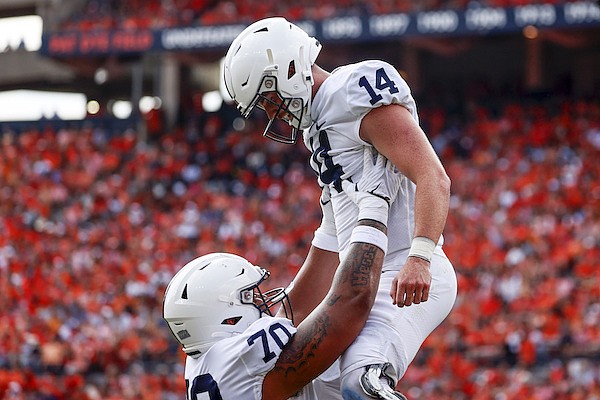 Penn State offensive lineman Juice Scruggs (70) celebrates with Penn State quarterback Sean Clifford (14) after he scored a touchdown against Auburn during the first half of an NCAA college football game, Saturday, Sept. 17, 2022, in Auburn, Ala. (AP Photo/Butch Dill)

AUBURN, Ala. — Nicholas Singleton and Kaytron Allen combined for 176 rushing yards and four touchdowns as No. 22 Penn State cruised to a 41-12 win at Auburn on Saturday.

The Nittany Lions’ freshman running backs were instrumental in the red zone. Penn State (3-0) scored touchdowns on each of its first four trips inside the 20-yard line. Quarterback Sean Clifford passed for 178 yards.

Penn State led by one point late in the second quarter before Allen scored his first of two touchdowns. After Auburn opened the third quarter with a three-and-out, Singleton broke a 54-yard run and found the end zone two plays later.

The Nittany Lions scored 20 points in the second half to pull away for the comfortable win in what was the first game against a Big Ten opponent for Auburn inside Jordan-Hare Stadium.

Penn State: The Nittany Lions dominated the line of scrimmage on both sides of the ball, which is a major step forward for James Franklin’s program. Penn State still has time to grow, too, considering the number of newcomers who are playing key roles so far this season.

Auburn: The pressure on Bryan Harsin will only increase after this loss, which was Auburn’s fifth straight to a Power Five team. On top of the four turnovers, the Tigers’ offense was unable to establish a consistent rushing attack and allowed a large amount of pressure in the passing game.

Penn State made its season debut in the poll this week and has a good chance to move up after a statement win on the road.