Petrino brought Hogs back to prominence 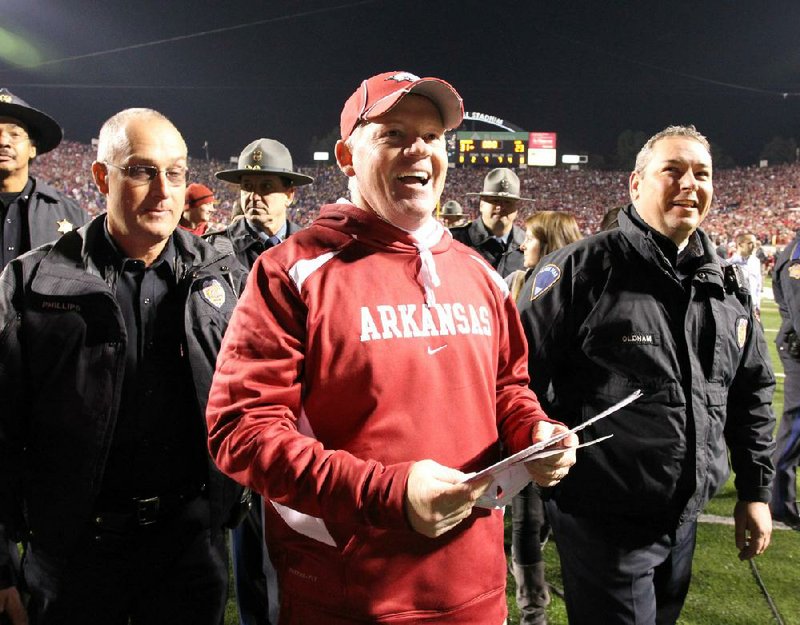 FAYETTEVILLE — What could have been the sleepiest home atmosphere of the season for the University of Arkansas could wind up being one of its rowdiest tonight.

Former Arkansas coach Bobby Petrino is back in town with his veteran Missouri State Bears to take on the sizzling Razorbacks of Coach Sam Pittman at 6 p.m. at Reynolds Razorback Stadium. The crowd is expected to be at near capacity and energized over the abundant storylines.

Both teams are 2-0 and ranked in the top 10 of their respective polls.

The Bears, No. 5 in the FCS rankings, have reached the FCS playoffs both seasons under Petrino, who led Arkansas to back-to-back top 10 finishes a decade ago, including an 11-2 mark in 2011 that was the program’s most recent season with at least nine victories prior to a 9-4 performance last year.

Pittman has been quite complementary of his predecessor all week, saying he uses that brief golden era in recruiting.

Petrino downplayed the hype surrounding his return. But when asked about the many down years following his departure in the spring of 2012, he exclaimed, “They’re back now. They look really good.

Arkansas will be aiming for its second 3-0 start in a row but just its 10th since joining the SEC for the 1992 season.

Missouri State is likely to be playing in front of the largest crowd in school history, as the current record is the 70,607 who watched the Bears get mauled 51-7 on Sept, 3, 2011, by an Arkansas team guided by Petrino.

Known as one of the greatest play callers in college football in the past quarter century, helped by a memory that is semi-photographic, Petrino’s presence evokes all kind of reactions and emotions in fans, former players and competitors.

“In my opinion he’s one of the better offensive game-planners out there,” Alabama Coach Nick Saban said this week. “I have a tremendous amount of respect for the issues he creates when you play against him.”

D.J. Williams’ career as an Arkansas tight end overlapped the first three years of the Petrino era, when the Razorbacks went from 5-7 to a Bowl Championship Series appearance in the Sugar Bowl with a 10-3 mark in 2010.

“I would say as hard as it was playing for that man and how difficult it was, in hindsight, looking back, his approach gave us no choice but to lean on each other and just try to keep up with these unrealistic expectations,” Williams said. “And then, by default, it got to a point where Petrino turned from tyrant into, ‘Hey, that’s my coach. I trust him and I respect him.’ It was just fascinating to see how quickly all that developed.”

Fayetteville High School Coach Casey Dick, who started at quarterback in Petrino’s first year at Arkansas, spoke about him at the Hawgs Illustrated sports club this week.

“He’s just an offensive mastermind,” Dick said. “That’s as simple as I can put it. There are so many things I took from him, his brother Paul, the staff we had at the University of Arkansas.

“He was always huge on the first drive of a game. Everybody’s asked me this week, ‘What can we expect from Coach Petrino?’ I’ve said, ‘Watch out for the first drive of the game, because he’s going to have something formulated just because that’s who he is.’ ”

Dick was among many former Razorbacks who heard Petrino’s presentation at a coaching clinic in Hot Springs last year.

“He got a good reception, because everybody in the football world respects him because of what he’s been able to do at different places with different kids,” Dick said. “He’s a really good football coach and understands what he’s talking about and really understands defenses and how to get his guys open.”

Petrino didn’t handle his big success at Arkansas properly, a failing he has admitted to in subsequent interviews.

Some fans might never forgive the hubris that led to his downfall at Arkansas. He had an affair, openly drove his motorcycle with former Razorback volleyball player Jessica Dorrell on board, then lied about her presence after wrecking the bike on April 1, 2012. He didn’t come clean about her being on the motorcycle until just before an Arkansas State Police report on the incident came out a few days before then-Arkansas athletic director Jeff Long fired him on April 10.

Petrino deflected questions about his time at Arkansas in his news conference early this week, but he spoke to ESPN’s Chris Low over the summer for an article published this week.

“Unfortunately, I will always get to carry that with me, how it ended there,” Petrino told ESPN.

“There’s instantly a reaction when you hear my name, whether it’s negative or positive. I wish it was more positive, but it’s probably more negative and a lot of that’s on me.

“But a lot of those people don’t really know me. They know what happened when I was fired at Arkansas and how poorly I handled everything, and that’s what sticks with them.”

Williams discussed Petrino’s impact on the players and the program in an informative interview with the Arkansas Democrat-Gazette this week.

“Us being in that position, us spending all that time together, we understand 100% that people make mistakes,” he said. “No one is above that. I would say for the most part that guys on my team, they’d be like, ‘Bobby P., he messed up for sure,’ but none of them instantly went to a place of hate. It was just like, ‘Man, I hope it humbles him and I hope he gets back up on his feet.’ ”

“When you step back and look at Coach Petrino, I know [he] has skewed views from everybody outside in the public,” Dick said. “Obviously he made a mistake. I’m not defending him. We all make mistakes. But the amount of football I learned from that guy in six to eight months, it’s unreal.”

Petrino’s coaching chops helped him get back on his feet quickly.

After a year out of the business in 2013, he coached one year at Western Kentucky before returning for a second head coaching stint at Louisville, which he led to top 10 finishes in 2004 and 2006. He led the Cardinals to national prominence, culminating in 2016, when they were in the top 10 of the AP rankings for nine consecutive weeks, including two weeks at No. 3, led by Heisman Trophy-winning quarterback Lamar Jackson.

But it all unraveled in 2018, the season after his father, Bob Petrino Sr., passed away. The first time in his coaching tenure he made it into a fifth year in the same job, the Cardinals fell apart after a 2-1 start, dropping their final nine games. Petrino was fired with two games remaining on the schedule and $14 million left on his contract.

Two seasons later, he was back in the game at Missouri State and he has quickly pumped life back into what had been a moribund program.

“I’m having as much fun as I’ve ever had coaching,” he said. “I’ve got eight grandkids that are around me all the time. So I’m big smiling and enjoying life.”

The current Razorbacks were mostly between the ages of 9-13 when Petrino last coached at Arkansas, but they are aware of his impact on the program because Pittman has used it in recruiting.

“They always tried to speak on that stuff because obviously Arkansas wasn’t where they wanted to be,” sophomore running back AJ Green said of his recruitment for the December 2020 signing period. “[Pittman] just always talked about how they wanted to build a new team and start fresh. I always wanted to be a part of that. That’s one of the reasons I came here.”

Senior defensive tackle Isaiah Nichols was in the state watching those powerhouse teams in 2010-11.

“I was around 10 or 11 around those years, and growing up watching that kind of makes you want to play football,” Nichols said. “That’s part of the reason why I fell in love with football just seeing them play and play hard having those two seasons.”