Petrino had it all, until he didn't 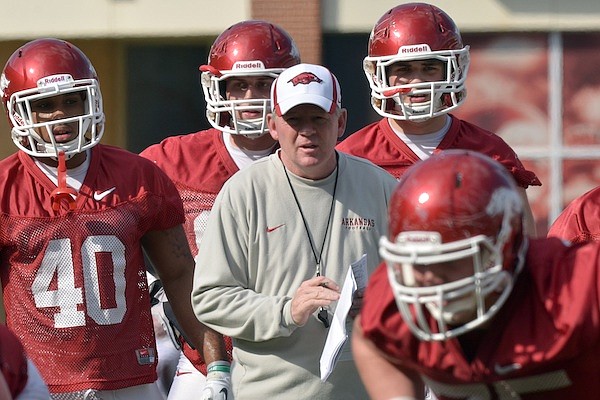 On the field and off.

Spanning Razorbacks coverage from 1973 to present, including Hall of Fame coaches Frank Broyles and Lou Holtz and prolific offenses under Ken Hatfield and Houston Nutt, it seems from here that Petrino offensively ranks above.

Creativity, diversity, prowess for passing blended with power when required, Petrino’s offenses displayed it all during his 2008-11 Razorbacks run. His 34-17 record at Arkansas was capped by 10-3 and 11-2 campaigns that closed in the Sugar and Cotton Bowls.

Petrino lit up the Razorbacks program.

He also blighted it. Many predicted he would given his past.

Petrino was the Atlanta Falcons head coach promising owner Arthur Blank he would continue there, then abruptly bolted to Arkansas.

Arkansas took something of a similar chance before.

In 1993, Broyles hired Danny Ford, a Hall of Famer for his Clemson record including a national championship, but ousted in a power struggle with Clemson’s administration.

As Ford would say later in his slipped sideways syntax about a different matter, “Been that, done there.”

Ford promised Broyles and Chancellor Dan Ferritor he would ruffle no higher-ups’ feathers. And he didn’t. The usual suspect for a coach’s dismissal, a couple of 4-7 seasons after winning the 1995 SEC West, ended Ford’s tenure without controversy, though he should be credited recruiting the players Nutt coached to a smashing 9-3 debut in 1998.

Unchecked by then-new Athletic Director Jeff Long, Petrino increasingly did as he pleased without reproach. He treated support staff abominably.

When Petrino’s motorcycle crash revealed crossing an irrevocable line hiring his mistress on the football payroll, he was fired amid scant support for a coach who had won so much.

Pittman credits some of the recent success built from the Petrino proof that Arkansas indeed can win.

“Last time Arkansas was relevant was when Coach Petrino was here,” Pittman said. “We’ve used that in recruiting.”

Given Petrino’s prowess, it’s the Razorbacks’ task tonight to keep his Arkansas relevance past tense.