4-star Shelley 'definitely coming back' for another visit 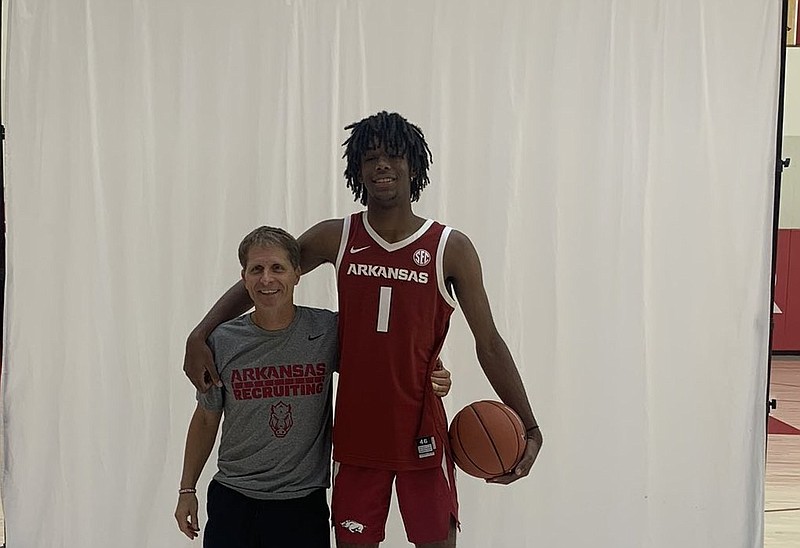 FAYETTEVILLE — Top-30 junior basketball prospect Jalen Shelley’s visit to Arkansas on Saturday went well and he plans to come back.

“The visit was really nice,” said Shelley, who has a 7-foot wingspan. “The facility is good and really focused in on the players' health and development. I really enjoyed that part and I really enjoyed watching practice and how intense it was. They pay very close attention to details.“

He received his 15th offer from the Razorbacks during the visit.

“It really means a lot,” he said. “It really shows how they are bought into me and I can really respect that.”

ESPN rates him a 4-star prospect, the No. 10 small forward and No. 30 overall prospect in the nation for the 2024 class.

Arkansas’ attention to detail was evident at Saturday’s practice.

“They have a paper for every practice,” Shelley said. “They keep up with everything they do, every minute has something planned and they have motivational quotes at the top. Everything is broken down in one paper.

"Before practice you can run through it and check everything out and see what you can get yourself into. I really enjoyed that."

Shelley averaged 12 points and 4.6 rebounds per game for Lone Star High School as a sophomore.

His brother is Missouri State starting quarterback Jason Shelley. His father, Jason Paul Shelley II, was a receiver at Washington and Central State University in Ohio. He played in the NFL and NFL Europe.

Jalen Shelley sees Arkansas as a program headed in the right direction.

“I’ve noticed the program gets better every single year,” he said. “I feel like this is going to be a big year for the program. They had a good freshman class come in, so I think they have a really good shot at winning something this year.”

“It really shows if you just do your job and do the right things you have a good shot at getting to the next level,” he said.

The trip to Fayetteville has Arkansas in a good spot with Shelley.

“Arkansas is definitely up there for me,” Shelley said. “Seeing how well they develop their players and just how hard they work, I really enjoy that. It just shows how much they love basketball and I feel like I could be a part of that family.”

He plans to make his way back to Arkansas again.

“Oh, most definitely coming back,” he said.