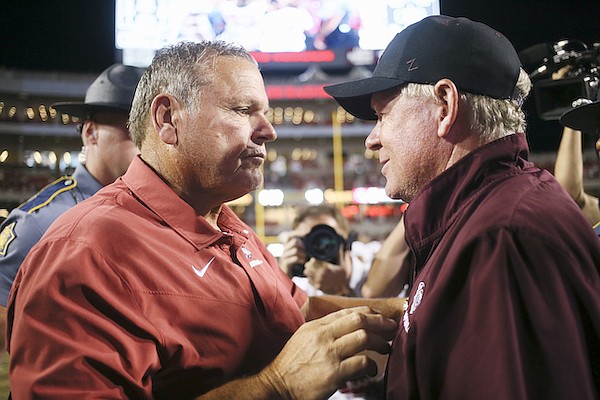 FAYETTEVILLE — Arkansas survived a scare from its former coach Bobby Petrino on Saturday.

The Razorbacks overcame deficits of 17 points before halftime and 10 points in the fourth quarter to beat Petrino's Missouri State Bears 38-27 at Reynolds Razorback Stadium.

Arkansas moved to 3-0 overall with the victory. The 10th-ranked Razorbacks return to SEC play next weekend with a game against No. 23 Texas A&M on a neutral field in Arlington, Texas.

A thank-you note might be owed to Petrino later for creating game film the Razorbacks can learn from, as well as for giving Arkansas a hard-fought game that taught the team how to come back from a big deficit.

It will be interesting to see how well Missouri State competes at the FCS level throughout the rest of the season. Based on Saturday's result, the Bears seem likely to a tough out in the FCS playoffs.

Here are some other thoughts from the Razorbacks' victory:

If not for turnovers, Arkansas might have never had to sweat the final quarter Saturday night.

Two Razorback fumbles in Missouri State territory — including one by running back Raheim Sanders at the goal line — led to the Bears’ first 10 points en route to a 17-0 lead.

Arkansas had first-and-goal at the Missouri State 1 when Sanders lost a fumble at the goal line. The Bears responded with a 69-yard drive that was capped by a field goal.

That was a 10-point swing. Without it, the Razorbacks’ winning margin might have been 21 points instead of 11.

On Saturday, the Bears won the turnover battle 3-0. Missouri State recovered fumbles by KJ Jefferson and Sanders in the first quarter, and intercepted Jefferson on the Razorbacks’ first second-half drive when a pass went off the hands of the typically sure-handed tight end Trey Knox.

Missouri State never fumbled the ball and only threw two passes that appeared interceptable. One was broken up by cornerback Hudson Clark in the third quarter. The other was a deep pass deflected by Dwight McGlothern.

It is difficult to win a game when a team is minus-3 in turnovers. That was the biggest key to the Bears’ lead that lasted for the better part of the first 50 minutes.

Missouri State had difficulty getting the Razorbacks off the field otherwise. Arkansas had 600 yards of offense before a game-ending kneel down dropped the Razorbacks’ total to 597.

Arkansas struggled with penalties in the first half, including on a pair of punt returns by Bryce Stephens that would have gone for 34 and 10 yards and might have further changed the course of the game. Those were cleaned up by the time Stephens housed an 82-yard return for the go-ahead score.

Overall, the Razorbacks had a cleaner night in the penalty department, with six that totaled 58 yards. There were no personal fouls on Arkansas, which had three of that variety the week before.

Those mistakes were corrected in the week leading up to the Missouri State game. There will surely be an emphasis this week in cleaning up the ones that allowed the Bears to keep things so close.

Defense is boom or bust

Two stats stand out for Arkansas’ defense through three games.

The Razorbacks lead college football with 17 sacks. They also rank last nationally in pass defense, allowing an average of 352.7 yards per game.

Like South Carolina the week before, Missouri State found several soft spots in the Arkansas secondary. The Bears had 13 pass plays go for at least 11 yards. Three passes went for at least 38 yards, including a 47-yard touchdown pass to Ty Scott on a fourth-and-1 play-action pass after the Razorbacks had tied the game in the third quarter.

Arkansas played the game without Myles Slusher, who has not seen the field since he suffered an apparent upper-body injury during the first quarter of the season opener. Pittman asserted again Saturday that Slusher is expected to return soon, but he said following the South Carolina game that Slusher was expected to play against Missouri State.

Slusher is a difference maker who should improve the back end upon his return to the nickel back position. That might allow the Razorbacks to reshuffle the rest of the secondary as they look to plug the massive hole left by safety Jalen Catalon’s season-ending injury in Week 1.

Arkansas’ next opponent, Texas A&M, has struggled to throw the ball this year, but the Razorbacks’ following two opponents, Alabama and Mississippi State, should challenge the pass defense more than any opponent yet.

A secondary’s best friend is a good pass rush. Arkansas has that through the play of transfers Drew Sanders, Jordan Domineck and Landon Jackson, who have combined for 11 sacks. Sanders has at least one sack in each game and his 5.5 sacks are tied for most in college football.

Zach Williams is also off to a strong start with 2.5 sacks.

A big sack game could have been predicted against Missouri State, which allowed nine sacks through its first two games against FCS teams. The Razorbacks put adequate pressure on Missouri State quarterback Jason Shelley for the first three quarters, then broke through with four fourth-quarter sacks.

The sacks have totaled 127 yards in lost yardage, which has Arkansas near the top of the game in rush defense. The Razorbacks are allowing 68.3 rushing yards per game, a stat that will be challenged by a Texas A&M team that is relying on the run game to carry a struggling offense.

Rocket Sanders is a big-time back

He lacks the same break-away speed, but it is hard not to have Darren McFadden flashbacks when Raheim Sanders rumbles into the open field wearing No. 5 in red.

Sanders is perhaps Arkansas’ biggest home-run threat since McFadden, seemingly the ideal blend of size and speed for the power uptempo game desired by head coach Sam Pittman and offensive coordinator Kendal Briles. Sanders has five runs this season of at least 24 yards, plus the 73-yard touchdown on a shovel pass during the fourth quarter against the Bears.

His goal-line fumble notwithstanding, Sanders has also been good in short-yardage situations as power back Dominique Johnson works his way toward playing time following a knee injury.

Two other long Sanders runs have been called back by holding penalties this year. A 27-yard gain against Cincinnati was negated, and a 45-yard run against South Carolina officially went for 10 yards due to a block 20 yards away from the line of scrimmage.

Against Missouri State, Sanders’ 27-yard run on first down sparked the Razorbacks’ first touchdown drive. His 43-yard carry to the Missouri State 5 set up KJ Jefferson’s quarterback keeper late in the fourth quarter to cap a 21-point flurry.

Sanders has escalated his rushing yards each week this season, from 117 against Cincinnati to 156 against South Carolina, to a career-high 167 against Missouri State.

He averaged 7.6 yards per carry against the Bears and had 242 all-purpose yards.

Sanders’ 440 rushing yards are tops in the SEC by a wide margin. Ole Miss’ Zach Evans is second with 317.

In an Arkansas running backs room full of talent, Sanders has set himself apart. If he can stay healthy, he is well on his way to an all-conference season, if not better.

Not all FCS teams are created equal

It is easy to see why Missouri State has become a cream-of-the-crop program at the FCS level.

The Bears have stocked their roster with transfers from FBS programs and have a former NFL head coach at the reins who has long been regarded as one of football’s best offensive minds.

Compare that to Arkansas-Pine Bluff, a team the Razorbacks were beating so badly at War Memorial Stadium last October that the teams agreed to shorten the quarters to 12 minutes in the second half.

Missouri State is not the typical FCS team that collects a paycheck for these games against the heavyweights of college football. It is far from the program that Arkansas scheduled a game against six years ago, when Petrino was coaching Lamar Jackson to a Heisman Trophy at Louisville.

At Missouri State, Petrino is doing what Petrino has been known to do. He is a master at orchestrating quick turnarounds. At each stop of his long college career, Petrino has had a record of at least three games above .500 by Year 2 at the latest.

And, at each stop, he has had his team competitive on the road in a game no one expected it to win. Oklahoma State was never in danger of losing to Missouri State in last season’s opening game, but the Cowboys could never quite put the Bears away, either, and won 23-16 when an MSU drive stalled in the red zone in the closing minutes. That Oklahoma State team won 12 games and the Fiesta Bowl.

Missouri State competes in one of the best conferences at the FCS level, the Missouri Valley. The conference includes FCS powerhouse North Dakota State and perennial contender South Dakota State — teams that also took Power 5 teams down to the wire in road games this year.

The Bears are one of the highest-quality FCS programs to come to Arkansas. The Razorbacks will host Western Carolina and UAPB from the FCS in Little Rock the next two years. Missouri State is scheduled to return to Fayetteville in 2025, and chances are the Bears will show again that not all FCS teams are created the same.

Hogs have a home-field advantage

Admit it, there were a lot of past games — North Texas, San Jose State, Western Kentucky — going through your mind as Arkansas fell behind by double digits in the fourth quarter.

Missouri State gave the Razorbacks their biggest scare by a team outside the Power 5 since those losses under Arkansas’ previous coaching staff.

Two things stand out as different this year from those games in 2018 and 2019.

Compare that to when Missouri State went ahead 17-0 in the second quarter. Arkansas responded with an 8-play, 75-yard drive that took 2 minutes, 11 seconds to settle things.

Then, following a drive when the Razorbacks inexplicably ran a draw on fourth-and-9 to commit a turnover on downs, Arkansas’ defense got off the field. The Razorbacks scored in two plays after the punt to make it a 17-14 game at halftime.

The second half was uneasy, but there was belief Arkansas would find a way.

The crowd was the second major difference in the Missouri State game from the ones a few years earlier. It appeared most among the announced attendance of 74,133 stayed until the fourth quarter — not a given these days — and the noise they generated made a difference during a game-changing sequence.

Sanders’ 73-yard touchdown on a shovel pass to pull Arkansas within 27-24 early in the fourth quarter reinvigorated the crowd. That noise appeared to rattle Missouri State quarterback Jason Shelley when he was sacked on consecutive snaps during the Bears’ ensuing possession.

The noise reached a crescendo when, following a third-down stop, Stephens returned a punt 82 yards for the go-ahead score. The press box shook from the roar of the crowd as Stephens hit the home sideline and it became apparent he would not be caught.

Noise appeared to remain a problem for Missouri State for the final nine minutes.

The crowd should be commended for its impact during Arkansas’ 3-0 start at home. The Cincinnati game turned due to the crowd noise after the Bearcats had first-and-goal at the 3, and last week’s South Carolina game was noisy for an 11 a.m. start.

Visitors have committed 10 false-start penalties and had three delays of game at Arkansas. Some, if not much, of that can be attributed to crowd noise.

Home-field advantage will be paramount for the Razorbacks’ next game in Fayetteville, vs. Alabama on Oct. 1.