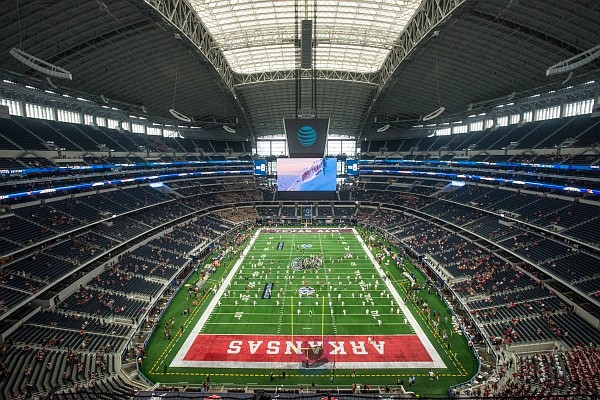 A view of AT&T Stadium on Saturday, Sept. 29, 2018, before the Southwest Classic between Arkansas and Texas A&M in Arlington, Texas.

FAYETTEVILLE — The pregame show for SEC Network will highlight an Arkansas game for the second time in four games next week.

"SEC Nation" will originate from outside AT&T Stadium in Arlington, Texas, prior to the Razorbacks' game against Texas A&M on Saturday. The two-hour show begins at 9 a.m.

It will be the first time "SEC Nation" has aired from the neutral-site Southwest Classic since the show launched in 2014. Arkansas and Texas A&M have played in Arlington each season since 2014, with the exception of a 2020 in College Station, Texas.

The show has originated from Fayetteville for an Arkansas game six times, including Sept. 3 prior to the Razorbacks' 31-24 season-opening victory over Cincinnati. The host of "SEC Nation" is Laura Rutledge, and the show also features Tim Tebow, Jordan Rodgers, Roman Harper and Paul Finebaum.

"College GameDay," the top-rated college football pregame show, will originate from Knoxville, Tenn., on Saturday prior to a matchup between No. 11 Tennessee and No. 20 Florida.