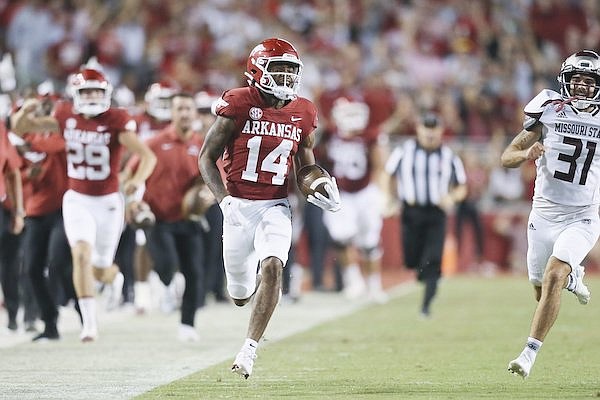 Arkansas punt returner Bryce Stephens (14) runs for a touchdown during a game against Missouri State on Saturday, Sept. 17, 2022, in Fayetteville.

FAYETTEVILLE — The last time a University of Arkansas player returned a punt return for a touchdown against Missouri State, Bobby Petrino could celebrate.

That wasn’t the case Saturday night.

Petrino, in his third season as Missouri State’s coach, had to watch helplessly from the visiting sideline as Bryce Stephens returned a punt 82 yards for a touchdown to give Arkansas its first lead against the Bears.

Arkansas rallied from a 17-point deficit to win 38-27 at Reynolds Razorback Stadium after Stephens’ return put the Razorbacks ahead 31-27 with 9:26 left.

When Petrino was in his last of four seasons as Arkansas’ coach, Joe Adams returned two punts for touchdowns — 61 and 69 yards — as the Razorbacks beat Missouri State 51-7 in the 2011 season opener.

Adams, who had five punt returns for touchdowns in his Arkansas career, also got to watch Stephens’ go-ahead touchdown in person. He was among nine inductees into the UA Sports Hall of Honor introduced to the crowd after the end of the first quarter.

Stephens, a redshirt freshman from Oklahoma City, said he had two punt returns for touchdowns as a sophomore at John Marshall High School.

“Man, I was on the sideline and I just knew we needed a momentum play, so I had to make one,” said Stephens, who also was a sprinter on the track and field team in high school. “We talked about it on the sideline before that and Sam [Mbake] told me to look at his side when I’m back there, so I did what I did.”

Missouri State punter Grant Burkett boomed a 57-yard kick that sent Stephens back to the Arkansas 18 to field.

Stephens cut to the middle of the field, picked up some key blocks and then some speed, cut back toward the Arkansas sideline and raced to the end zone untouched.

“It was great blocks all around,” Stephens said. “So I just appreciate my teammates for doing that. Hit the hole and went outside.”

“Mbake did a really good job on the outside, and you know Bryce won the 100 meters in Oklahoma. He’s fast,” Pittman said. “Guys did a great job, but he got up the sideline and outran them. Big, big, big play in the game.”

“We thought we’d have a chance to return one, but we obviously didn’t think it would go for a touchdown,” Pittman said.

Arkansas returned a punt for a touchdown for the second consecutive season.

Nathan Parodi had an 80-yard return in the Razorbacks’ 45-3 victory over the University of Arkansas-Pine Bluff in Little Rock, but the circumstances were far different Saturday night with Stephens’ return.

“Man, it was phenomenal,” Arkansas senior safety Simeon Blair said. “I have to cover Bryce a lot in practice, so I know he’s super fast.

“That was just very exciting. It was a big momentum shift. It gave us a little bit more energy to go out there and play even that much harder.”

”He can make one cut and go the other way, and he would still be a top speed,” Blair said. “I feel like he has an elite speed, and we’ve been waiting on him to get a punt return like that because we know he has the speed, he has the vision.”

Missouri State had three takeaways to none for Arkansas, so the Razorbacks needed help from their special teams.

“Any time you can make a huge play like that and shift the momentum, it can just take the life out of the other team,” Arkansas linebacker Drew Sanders said. “It was a game-changing play. The momentum fully switched to our side.”

“You know how you’re sitting there, and then your heart starts racing and going faster and faster all of a sudden as the play develops,” Domineck said. “That was really a high for us. We just wanted to be able to ride that momentum.”

Earlier in the game, Stephens had punt returns of 34 and 10 yards that were called back because of penalties.

“Before the game, it was a big talk,” Stephens said of the return game. “So I went in there knowing I could get something every return.”

Fortunately for Stephens and the Razorbacks, there were no flags thrown on his game-changing return.

“We needed a momentum play and Bryce delivered,” Arkansas quarterback KJ Jefferson said. “Just having a guy like Bryce back there, you can trust him and know that he’s due for a big play any given moment.”

Prior to Parodi’s touchdown, Arkansas hadn’t scored on a punt return since the Cotton Bowl to cap the 2011 season when Adams had a 51-yarder in the Razorbacks’ 29-16 victory over Kansas State.

Adams had five punt returns for touchdowns for the Razorbacks, including four as a senior in 2011.

Pittman smiled when asked if Adams being at Saturday night’s game was good karma for the Razorbacks considering what Stephens did.

“That’s what it was,” Pittman said. “We need to take him down to Dallas.”

The Razorbacks play Texas A&M next Saturday night in Arlington, Texas, which prompted Pittman to ask Arkansas Athletic Director Hunter Yurachek if Adams can travel with the team.

“He was electric when he played here,” Pittman said of Adams going into the Hall of Honor. “Good for him, congratulations to him and all the others who were inducted.”

Stephens made sure the inductees could celebrate after the game as well.