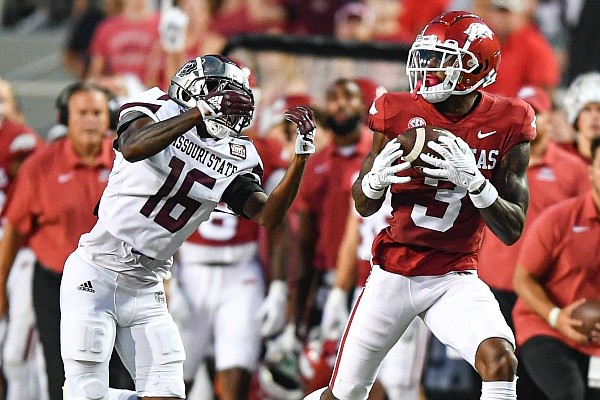 FAYETTEVILLE — Matt Landers had a chance to make his first touchdown catch for the University of Arkansas two weeks ago against South Carolina.

Landers, a senior transfer from Toledo, got behind the defense on the Razorbacks’ first series of the third quarter on third-and-11 from their 48. KJ Jefferson’s pass hit him in stride, but Landers couldn’t make the over-the-shoulder catch.

Landers had a big bounce-back game Saturday night when Arkansas rallied to beat Missouri State 38-27. After the Bears jumped out to a 17-0 lead in the first half, Landers had catches on four of the Razorbacks’ scoring drives.

Landers finished with a career-high 7 receptions for 123 yards and gained 48 yards after the catch.

“I’m proud of Matt, because he dropped a pass against South Carolina and he struggled with that,” Pittman said. “It was bothering him. I hope he doesn’t mind me saying that.

“I told him, ‘You’re going to drop another one eventually. You will. But it ain’t because you don’t want to and it’s not because you can’t catch it. It’s just you dropped it, so get over it and move on.’

“‘The good Lord is perfect. Nobody else is. We’re going to be all right.’”

More from WholeHogSports: Razorbacks remain No. 10 in AP poll

“Any drop he has in practice or in the game, he’s extremely hard on himself,” Jefferson said. “So me just being able to be a leader, I talk to him like, ‘Next play, next play. I’m not losing confidence in you. I know I still can go to you in any given moment, deliver a great ball to you. I know you’ll make the play.’

“Just being able to keep him level-headed, [to have a] neutral mindset and not getting too down on himself.”

It was the third game of Landers’ college career — which began at Georgia — in which he had more than 100 receiving yards.

Through three games for the No. 10 Razorbacks, Landers has team-highs of 14 receptions for 211 yards after he had 20 for 514 and 5 touchdowns last season.

Despite Landers’ drop against South Carolina, he had 4 catches for 45 yards along with a 6-yard run.

“Matt Landers is very dangerous,” Arkansas senior safety Simeon Blair said. “I hate having to cover him in practice. He’s definitely going to be a weapon for us.

“He’s a big, long guy who is very fast. We call him ‘The Gazelle’ in practice because those legs never stop. It doesn’t even look like he’s running hard. He’s just moving his body.”

“Matt is going to come in and work,” Brini said. You can catch Matt after practice catching 100 balls on the Jugs [passing machine]. Matt is just going to work, and I love that about Matt.”

Landers arrived at Arkansas in June.

“When Matt first got in, he called and told me to come to the facility, and right then and there we got to work,” Jefferson said. “I was watching him run routes and trying to get the timing down as quick as possible.”

On Arkansas’ first offensive play this season, Jefferson completed a pass to Landers against Cincinnati for a 17-yard gain.

“The team loves him,” Jefferson said. “And having a guy like Matt with that speed and versatility is big.”

“A lot of schools hit me up,” Landers said during training camp of the interest he generated in the transfer portal. “The relationship with Coach Pitt was the reason I came here, but also relationships I had with other people from when I was at Georgia.”

More from WholeHogSports: 5 thoughts from Arkansas' win over Missouri State

“I didn’t know him quite as well, obviously wasn’t his position coach when I was at Georgia. But I knew that he was fast and was a good person. But our relationship has grown since he’s been here.

“Obviously had more time to visit with him and talk to him and I’ve tried to be of help to him and he’s been a joy to have on the team.”

Landers had catches on the first play of both of Arkansas’ first-half touchdown drives against Missouri State. His 20-yard catch began a 75-yard drive and he had a 47-yarder the play before Jefferson connected with Jadon Haselwood on a 38-yard touchdown pass.

Landers also had an 18-yard catch on an 84-yard drive in the third quarter that ended with Cam Little’s 27-yard field goal.

“For him to bounce back like that, it’s big,” Pittman said of Landers’ performance coming off his drop against South Carolina. “He’s a good player, a really good player.

“He’s going to help us throughout the year. I’m awful proud of him and for him.”