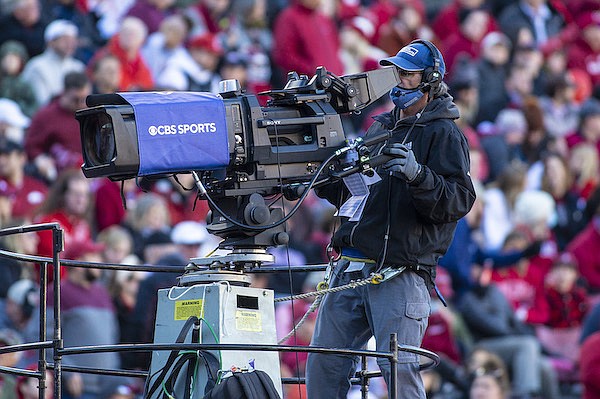 A CBS cameraman is shown during a game between Arkansas and Missouri on Friday, Nov. 26, 2021, in Fayetteville.

FAYETTEVILLE — For the first time in five years, Arkansas will host the CBS football game of the week on Oct. 1 when Alabama comes to Reynolds Razorback Stadium.

The game between the No. 10 Razorbacks and the No. 2 Crimson Tide is scheduled to begin at 2:30 p.m. It will also be streamed by Paramount-Plus.

Both teams are undefeated and will play SEC opponents this week. Alabama will host Vanderbilt, and Arkansas will play 23rd-ranked Texas A&M in Arlington, Texas.

CBS televised two games in Fayetteville last year, but the network has not featured an Arkansas home game in its Saturday mid-afternoon time slot since a 2017 game against TCU. The Razorbacks played four times on the network last season, including twice in the featured time slot — a 20-10 victory over Texas A&M in Arlington and a 42-35 loss at Alabama.

Arkansas also lost 38-23 to Auburn in the first game of a doubleheader on CBS last October. The Razorbacks defeated Missouri 34-17 on the network last year in a Friday game.

CBS typically delivers some of the most-watched games each season. Last year's Arkansas-Alabama game averaged nearly 5.5 million viewers, with a peak of more than 7.4 million during the fourth quarter.

The network will televise the Arkansas-Alabama game for the 11th time, and for the first time in Fayetteville since 2012. The Razorbacks have lost 15 consecutive games to the Crimson Tide.

CBS has two seasons remaining in a contract with the SEC and will begin featuring Big Ten games in 2024.