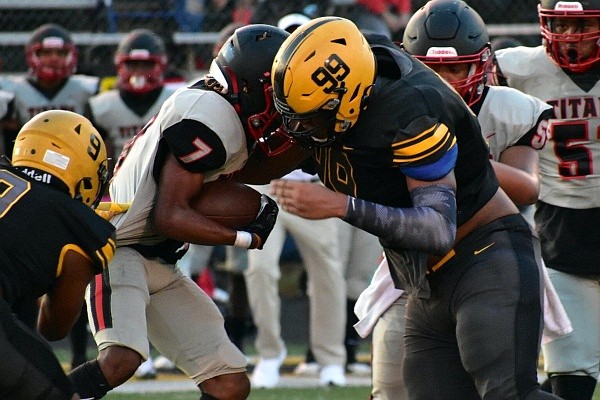 Watson Chapel coach Maurice Moody has coached a current Arkansas football commitment and believes he may have another high-caliber prospect.

When he was hired by the Wildcats last December, one of the first players to catch his attention was defensive lineman LeBron Modacure, who stands 6-5 and 285 pounds.

“The first thing that stuck out to me when I saw the kid was how big he was and my first thought was, ‘OK, this guy is a senior,’” Moody said. “I got a chance to meet him and I asked, 'What grade are you in?' He said, 'Coach, I’m a ninth grader.'"

“If he continues to buy in to the weight room and continues to work on his craft and stay hungry and stay motivated, I think he can be right up there with a guy like Quincy,” Moody said. “He has all the tools and all the ability. He’s much bigger than Quincy.”

During a doctor’s appointment, Modacure was told he will likely grow more.

Moody was reluctant to move the freshman up to varsity level, but didn’t see him being challenged while playing down. Modacure has four sacks in limited snaps this season.

“I wasn’t going to move him up, but I thought he wouldn’t get the quality of reps as a ninth grader in a freshman game,” Moody said. “He was kind of bullying those guys because he was like a man among boys, so I decided to move him up. I knew it would be tough on him from time to time because he doesn’t have the physical strength yet.

“He’s getting better and better each ball game.”

He also likes Modacure’s makeup as a young man.

“He’s a really good kid, very quiet, shy,” Moody said. “Just a good kid to be around. A good teammate and good in the locker room.”