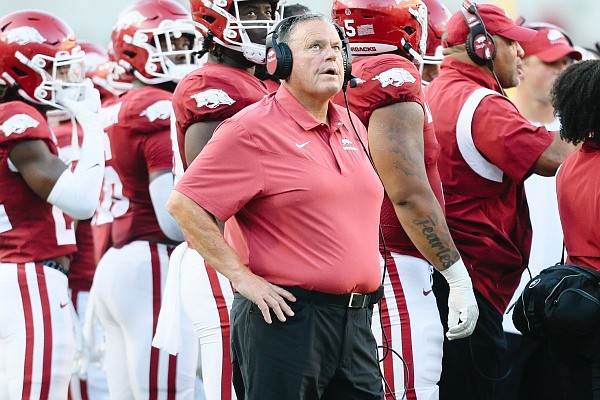 Arkansas head coach Sam Pittman looks on as officials review a fumble at the goal line by running back Raheim Sanders (5), Saturday, September 17, 2022 during the first quarter of a football game at Donald W. Reynolds Razorback Stadium in Fayetteville.

Below are the highlights:

• The Aggies are big on the defensive line, and they have two explosive guys on offense in Devon Achane and Ainias Smith. Max Johnson played well at quarterback against Miami last Saturday, and Texas A&M's special teams group is solid.

• Jimbo Fisher, I consider him a friend of mine, and I have a lot of respect for him, his coaches and his roster.

In a nutshell, special teams helped us, but even there we had some penalties. We didn’t tackle or cover well defensively.

• On tackling, we worked on that last week. We missed a lot of tackles at linebacker, as well, vs. Missouri State, so they have to be better, too. We’ll continue to stress the importance of that this week.

• On coverage issues, we have to make sure we have the right guys in the right spots. Part of it was we have some new guys back there. We’re going to experiment this week. Myles Slusher will be back this week, and that should help us. We need Malik Chavis on the field, and when he’s not at corner, we need him at safety. We need the best players on the field at all times.

• Dwight McGlothern got hurt Saturday. He has a hamstring issue. It wasn’t all that much of a problem because he lifted on Sunday. He’ll practice today.

• Texas A&M is still going to run the ball with Max Johnson. He’s in there to manage the game and throw the football. He’s that type of player at Texas A&M and was the same at LSU.

• Raheim Sanders is always early, and his teachers and the people on the academic staff love him. He’s a perfectionist. That’s probably what makes him good. His want-to is higher than his talent. Just a really fine kid. He had a good game before and after his fumble last Saturday.

• I expected Sanders to be a really good tailback and player, but I don’t know if I expected us to use him this much. I knew he’d produce. A little surprised with his numbers, but that isn’t a knock on his talent.

• Talking to Jordan Domineck’s parents when we were recruiting him, they were genuine, and he’s the same way. He wanted a chance to play in the SEC and wanted to see if he was good enough to play in this league. You can tell he’s a good kid because of this parents.

• On Texas A&M’s defense: They played two totally different offenses the last two weeks. Miami wanted to throw it more. They have good wideouts to get the ball to. Appalachian State wanted to come at them with the run. The Aggies got a lot better in a week’s time on defense.

• Dan Skipper called me last week and told me he was going to get his first career start with Detroit. He’s one of my favorite players I’ve coached over the years. I called him after I saw the Lions' video from the postgame locker room, and I thought it was pretty cool. I texted Dan Campbell, too, and he got back with me.

• LSU transfer Landon Jackson is playing with more speed and confidence. He started last week with Jashaud Stewart out. Him and Alabama transfer Drew Sanders are growing more comfortable each week.

• We could have played running back Dominique Johnson last week, we just didn’t. With Stewart, I think we’ve got to see how he looks the next couple of days. The training staff has seen him, but I haven’t yet.

• I think Jadon Haselwood has been the most consistent of the receivers. He’s a leader now, and he’s tough. On Ketron Jackson, we could probably get him out there in some 10 personnel, but that would mean we have to take Trey Knox off the field. I like our rotation at receiver right now.