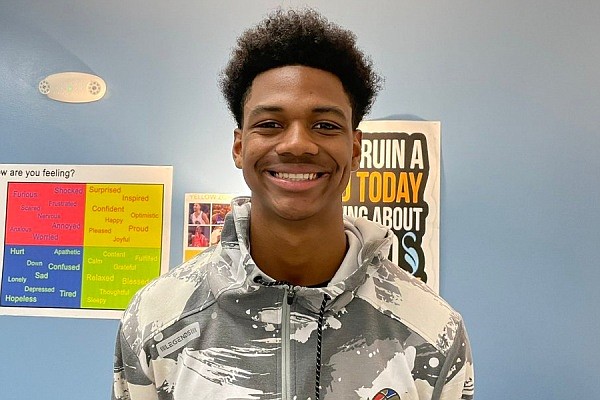 DALLAS — Arkansas is going hard after consensus 4-star basketball target Dink Pate, and because of that he is looking to make his way to Fayetteville in the near future.

Razorbacks coach Eric Musselman and assistant coaches Keith Smart and Gus Argenal have been in steady contact with Pate while also visiting the school on a consistent basis. He feels like a priority.

Pate is looking to make an official visit to Fayetteville in mid-October or November.

“I’m actually ready to get down to campus sometime. I’ve been talking to Coach Musselman about getting a date set,” he said

While Pate is a consensus 4-star prospect, he is rated as high as the No. 21 prospect in the nation by Rivals. Musselman and his staff preach how they have faith in his abilities.

“They just keep telling me they believe in me,” Pate said. “They have faith in me. They’re recruiting me as a point guard because that’s the position I play. Everybody thinks just because I’m 6-8 that I play down low. That’s not the case.

"I can bring the ball up and I can facilitate the game. That’s what Coach Musselman told me.”

Pate also praised Razorbacks fans for the way they support the program.

June 15 was the first day college coaches could make direct contact with junior prospects. Pate was hit up by numerous coaches at the strike of midnight.

“When it first happened, June 15, as soon as 12 o’clock hit I had 22 coaches call me,” Pate said. “As I was on the phone with one coach, there’s another coach calling me. For my mom and them to help me, it helps relieve some of the pressure off of me and all I have to worry about is basketball. I think that’s good for me.”

While he does his share of communicating with college coaches, his parents and Pinkston coach Cedric Griffin try to take some of the load off of him.

“I think it’s all about my circle. Me and my family have a lot to do with that,” Pate said. “My mom and my step-dad, they handle most of that. They just tell me to go out and play basketball – something I love to do. Coach (Griffin), he handles all the coaches.”

He transferred to Prolific Prep in Napa, Calif., for his sophomore season. As a freshman at Pinkston, he was named the Dallas Morning News’ newcomer of the year after averaging 18 points, 6.3 rebounds and 3.4 assists per game.

Griffin calls Pate a great kid and someone who is super competitive.

“I think what makes Pate a great basketball player is his work ethic. He works hard, he trains and he puts in the time to get better and he’s a competitor,” Griffin said.

Griffin remembers seeing Pate as a seventh grader and knew then he was different.

“I just said, ‘Wow,’” Griffin said. “I think he was in high school and then when he told me he was in the seventh grade, I was just like, ‘Wow, this kid is going to be special.'"

Pate averaged 10 points, 8 assists and 6 rebounds per game for Team Trae Young on the Adidas circuit during the summer. He has made unofficial visits to Alabama, Texas A&M and Tulsa.

He and Arkansas freshman point guard Anthony Black are friends.

“Me and Anthony, we’re real tight,” said Pate, who included a photo of Black while announcing his offer from the Razorbacks in July. “He talks about Arkansas all the time, every time I talk to him.”

With Black and fellow freshmen Jordan Walsh and Nick Smith being former 5-star recruits, he has noticed Arkansas recruiting at a high level with the 2022 class finishing No. 2 nationally.

He also is aware of the Razorbacks recruiting Duncanville, Texas, 5-star Ron Holland in the 2023 class.

“I played (against) Jordan my freshman year,” Pate said. “I never played Nick, though, but Ron, if he chooses to go to Arkansas I think it would be a good move for him. I know Ron, but I don’t know him like that to tell him where he should go.”

A lover of sports, Pate said if he wasn’t playing basketball, he would be a baseball player.

“First base is really where the action is," Pate said. "Outfielder, there isn’t any action out there.”

Pate, who has a 3.4 grade point average, is looking into majoring in sports management so he can remain active in sports after his playing days.

He has a good idea when he wants to make his college decision.

“I do plan on committing after my last AAU game,” he said.