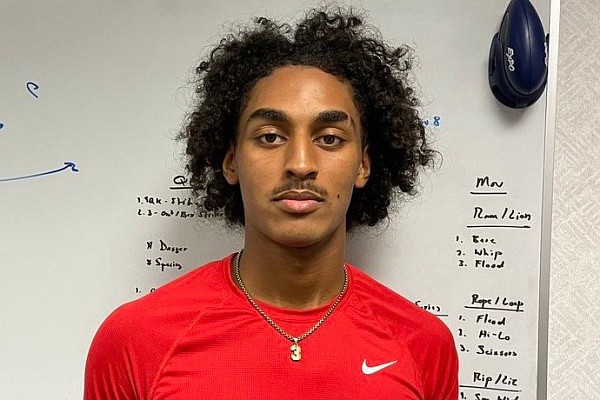 ALLEN, Texas — ESPN 4-star junior quarterback Michael Hawkins, who visited Arkansas twice this summer, likes how the Razorbacks are staying in touch with him.

He visited Fayetteville in June and again on July 30 for the Tailgate on the Hill gathering that featured numerous Arkansas commitments and some 2024 and 2025 prospects.

“It’s been great ever since I got up there for camp and threw in front of Coach (Kendal) Briles and Coach (Sam) Pittman and the staff,” Hawkins said. “Our relationship has gotten way better.”

Pittman, Briles and assistant quarterbacks coach Mark Cala have made regular contact since college coaches were able to reach out directly to junior recruits Sept. 1.

“It’s been great,” Hawkins said. “I talk to Coach Briles almost three times a week. He’s a great guy. I talk to Coach Cala, too. Coach Pittman hits me about once a week, so it’s pretty good.”

“They really don’t reach out as much as Coach Pittman does. Some do, but some don’t,” he added.

Hawkins was able to meet Arkansas quarterback KJ Jefferson during the June camp.

His father Mike played cornerback at Oklahoma before being drafted in the fifth round by the Green Bay Packers in the 2005 NFL Draft. He also played for Cleveland.

Hawkins was named the District 5-6A Offensive Newcomer of the Year.

ESPN also rates him the No. 6 dual-threat quarterback and No. 190 overall recruit in the nation in the 2024 class.

Allen coach Lee Wiginton said Hawkins is passionate about the game and pushing his teammates to be the best they can be.

“He’s an intense competitor, a phenomenal playmaker,” Wiginton said. “Many times when we’re in third down, I’m hoping things break down because knowing when he gets out there and is able to just spread the field, he’s either going to be making great decisions with his arm or hurting the defense with his legs. He finds ways to make big plays when you need it the most.”

“Just coming off of that first camp, it really shocked me how their facility is,” Hawkins said. “I didn’t expect it to look that nice.”

It appears he could watch Arkansas the next two weekends.

If he attends the Texas A&M game, he would have to do so as a guest of the Aggies since they are the home team in Saturday's game in Arlington, Texas.

Hawkins is looking to visit Oklahoma this season, but he is unsure on other trips.

“I want to hit up an OU game, for sure, and then I really don’t know. I haven’t figured out my schedule,” he said.

His brother Maliek Hawkins is a sophomore cornerback prospect with an offer from Arkansas.

The Razorbacks look to be in a good position with Hawkins.

“They’re up there in my top list right now,” Hawkins said. “I think they’ll stay up there as long as they recruit me really hard and we keep our relationship tight.”