Improved tackling is a must, Pittman says 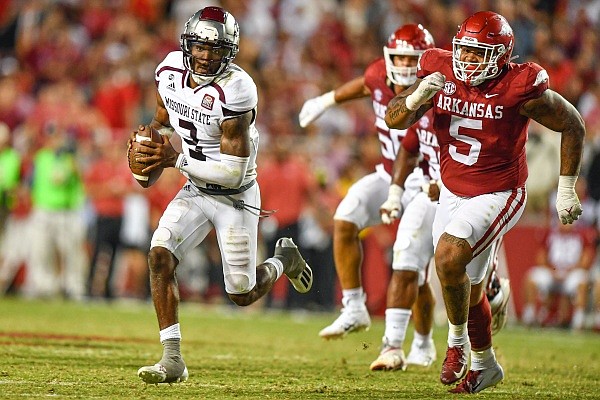 FAYETTEVILLE — Missouri State pulled off a commendable feat last Saturday against the University of Arkansas.

The Bears managed to get tackle-breaking runs and ball carriers into green spaces from four different position groups in their 38-27 loss to the No. 10 Razorbacks.

“I’ll put it in a nutshell for you: We didn’t tackle well as a team. We’re having a hard time covering opponents,” Arkansas Coach Sam Pittman said Monday. “We’ve had that the entire year.”

The Razorbacks’ secondary turned in the kind of performance that has opposing offensive coordinators eager to get the ball into the hands of playmakers on the second level and beyond. The next challenge for Arkansas will come from a Texas A&M offense cooked up by Coach Jimbo Fisher and offensive coordinators Darrell Dickey and James Coley on Saturday at 6 p.m. Central at AT&T Stadium in Arlington, Texas.

The Aggies have struggled offensively, ranking last in the SEC in scoring (20.7 points per game) and total offense (313.7 yards per game), but they have plenty of weapons.

The Razorbacks were carved up for 409 total yards — 357 on passing — by the FCS level Bears, who had two extra days to prepare and work on their plan after playing on Thursday the previous week.

Each of them had plays with broken tackles or free yards in space, most notably Ty Scott, who slipped beyond defensive back Simeon Blair on a fourth-and-1 play-action pass to catch a 47-yard touchdown.

On top of that, Shelley had a few quality runs, including a 24-yard touchdown that gave the Bears a 17-0 lead on which he slipped a tackle by Bumper Pool a few yards short of the line to gain.

Pool was not alone in missing tackles, as virtually every player on the Arkansas defense whiffed here or there. The Razorbacks have the lowest tackling grade among SEC teams, per Pro Football Focus.

“I felt like Bobby Petrino was also a good coach. He drew up some good plays that we would have to come to the sideline and redesign how we needed to match it up. … They definitely did a lot of good. But I felt like we could have played better also.”

It has been boom or bust much of the season, as Arkansas leads the FBS with 5.67 sacks per game but is last with 352.7 passing yards allowed.

Missouri State had 268 yards after the catch Saturday, which is different from yards after contact.

For comparison’s sake, the Razorbacks had 206 yards after the catch Saturday. But most of that came on Raheim Sanders’ 73-yard shovel-pass touchdown, Ketron Jackson Jr.’s 64-yard catch and run, and Jadon Haselwood’s 38-yard touchdown.

The Bears split their yards after catch on a large selection of plays throughout the game.

Pittman praised the work of the Arkansas defensive line and said the linebackers had their share of missed tackles along with the defensive backs.

“I think the first thing is you have to make sure you have the right people in the right spots,” Pittman said. “You know what I’m talking about, pre-snap.”

There could be good news on the horizon for Arkansas.

Nickel back Myles Slusher, who suffered a head/neck injury in the opener against Cincinnati, was back at practice Monday in a green no-contact jersey after missing a couple of games. He would add a veteran presence to a unit that has been rocked by the loss of safety Jalen Catalon and also by losing cornerback LaDarrius Bishop.

On top of that, cornerback Dwight McGlothern missed part of the second half last week with a tight hamstring and Latavious Brini was running on an ankle that wasn’t 100%.

Multiple Razorbacks had poor tackling grades per Pro Football Focus, including Blair and Brini at safety and nickel back Jayden Johnson. The best tackling grade outside of the defensive line was posted by middle safety Khari Johnson.

Pittman, defensive coordinator Barry Odoom and cornerbacks coach Dominque Bowman are looking at ways to match the healthy players to their optimal roles, which Pittman said could mean adjustments in the secondary.

He has mentioned Slusher might return as a safety, rather than at nickel back, as Jayden Johnson is more suited to play nickel than safety. Additionally, corners Malik Chavis and Hudson Clark could take on different spots. Chavis and Clark rotated at one cornerback spot until the McGlothern injury.

“Do we feel good enough about moving Chavis to a safety?” Pittman said when asked if that duo would continue exchanging series. “With Slusher coming back, we have some opportunities to have some movement.”

On the tackling front, Pittman said the defense did some live tackling last week against scout team running backs.

As for pass coverage plans, everything seems on the table.

“If somebody’s going to beat us, they need to beat us with us attempting to cover their guy,” Pittman said. “We’ve had obviously too many mistakes there and backs coming out of the backfield, things of that nature, where we’re in man coverage and we’ve got to peel a linebacker out there.

“I will say this, we’re doing exactly what we think is best for us to win. There have been conversations about going back and running what did last year, double cloud about 90% of the snaps. And it worked some games, and it didn’t some games.”

“But we’ve got to fix that problem,” he said. “Everybody in the building’s aware of it and how we do that is going to be a combination of who’s on the field and the opponent. Whether we feel like we can cover them man to man or not. And if we can’t cover them in zone coverage, then we definitely have to put pressure on the quarterback, because that’s something that we’re good at.

“But to do that you have to be able to play some man, even though we went into some quarters, halves coverage and rushed Drew Sanders last week in the second half. It seemed to work out a little bit better for us.”