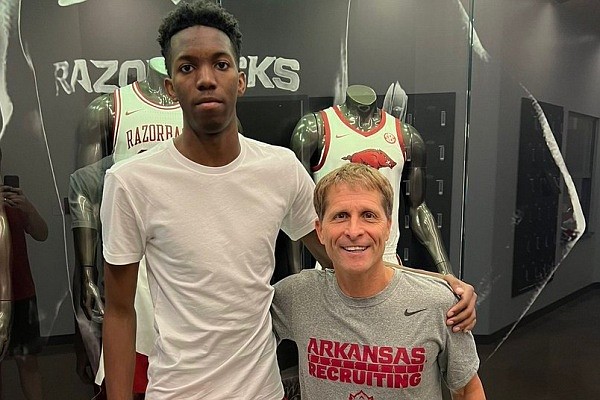 The visit was his first since last year when the Razorbacks' football team defeated Texas. Seeing some of the current players and experiencing Arkansas’ 38-27 come-from-behind victory over Missouri State highlighted the trip.

“Getting to reunite with the players, I was around all the players,” Thomas said. “It was good vibes. The football game was obviously nice. It was a boost that we won. The environment was crazy as always.”

He and Arkansas’ heralded freshman guard Nick Smith Jr. hung out during the trip.

“We were just going around the campus at first and then we went to his house, housing area and we were just talking about how he liked it,” Thomas said. “He told me it was a nice environment. I just appreciate having that moment and sitting down and talking to him.”

Thomas averaged about 14.6 points, 6.8 rebounds, 2.3 assists and 1.5 blocks per game for the Patriots as a sophomore. He played for the 16-under Bradley Beal Elite in spring and summer basketball.

“With a long and ‘slim’ frame, Thomas has all the tools that could take him a long way in the game with development and patience,” ESPN national recruiting director Paul Biancardi said. “His shooting stroke is effective from long range as it exudes balance and footwork. His ability to find the open pocket of space for his pull-up jumper is hard to guard. In the open floor, his offensive conversion game is fluid and direct as he puts pressure on the defense. A terrific long-term prospect.”

Two other 2024 prospects also visited Arkansas on Saturday: ESPN 5-star point guard David Castillo and 4-star small forward Jalen Shelley. Castillo also visited the Razorbacks for the Texas game last year, as well, and that’s when he and Thomas hit it off.

“Game recognizes game,” Thomas said. “I saw Dave play a couple times and I saw him on the visit and we just talked. Just real cool thoughts. We clicked.”

They’ve considered the possibility of playing together in college.

Thomas said he, Castillo and Shelley were impressed while watching the Razorbacks' practice.

“I was definitely impressed with the high intensity,” Thomas said. “The attention to detail was one thing that really impressed me. I liked the fact they got up a lot of shots.”

“I obviously was able to talk to Coach Muss and take pictures with him,” Thomas said. “Gus Argenal and Ronnie Brewer, I talked to them a lot, too. Ronnie Brewer showed us around. I had a sit-down talk with Gus about the things he liked and the things I needed to improve on.”

Thomas also said he is looking to make his way back to Fayetteville.

“I definitely want to go back for a basketball game and see what it’s like during the season,” he said.

He has an official visit set for Missouri on Oct. 1. He said Arkansas is in a good spot with him after Saturday’s visit.

“Arkansas has always been top of my list and one of the schools I’m considering the most,” he said.