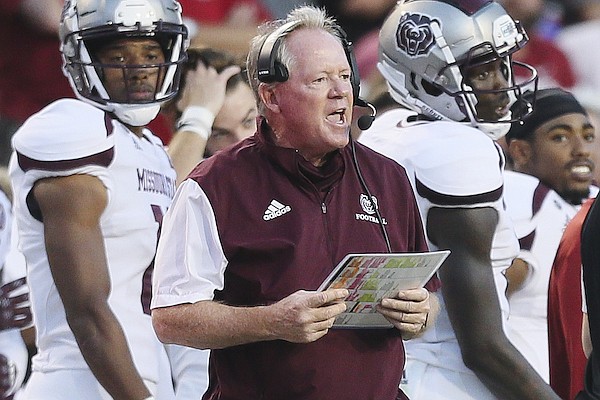 Missouri State coach Bobby Petrino is shown during a game against Arkansas on Saturday, Sept. 17, 2022, in Fayetteville.

“I want to congratulate Missouri State and Coach Petrino on a great game plan,” Arkansas Coach Sam Pittman said for post-game openers. “He had his kids better prepared than I did. He did a wonderful job.”

Veteran Arkansas fans have applauded this before.

In Petrino’s second Razorbacks game in 2008, Louisiana-Monroe perched on an upset bid when Arkansas faced fourth-and-1 at the ULM 32. Quarterback Casey Dick faked a handoff and threw a 25-yard pass to freshman tight end Chris Gragg. Dick connected with tight end D.J. Williams for a 7-yard TD with 1:22 left.

The Hogs’ survived ULM missing a field goal to escape 28-27 in Little Rock.

Petrino’s Bears did not run the ball well, 52 yards, but they ran it enough with 357 yards passing and a 3-0 turnover margin to control the clock 35:51.

“I’m so glad we won,” Pittman said. “There were several times it looked like we weren’t going to. Our kids kept fighting and clawing. To come out with an 11-point win says a lot about our culture and our kids.”

A loss to Missouri State easily could have redefined these 3-0 Hogs heading into Saturday’s SEC game with the Texas A&M Aggies at the Dallas Cowboys’ AT&T Stadium.

John L. Smith’s 2012 Razorbacks ranked eighth in the country when they lost to Louisiana-Monroe in overtime. It subsequently took 4-8 and 3-9 Razorbacks seasons before remotely recovering.

But surviving games like Saturday can prove a program’s impetus. Back in 1979, then-Southwest Conference patsy TCU — winless since 1958 in its annual Arkansas game — had the Hogs dead to rights in Fort Worth until Arkansas linebacker Mike Massey’s game-tying, pick-six interception.

Forgotten, though it won’t be by the Aggies’ staff, is Stephens broke 34- and 10-yard runs his first two returns vs. the Bears, but they were negated by penalties.