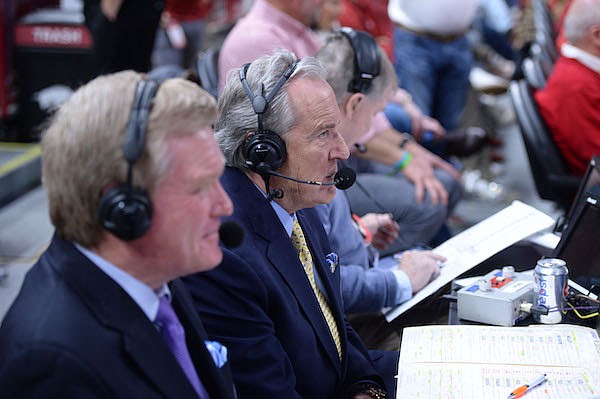 CBS announcers Brad Nessler (center) and Pete Gillen (left) are shown during a game between Arkansas and Kentucky on Saturday, Feb. 26, 2022, in Fayetteville.

FAYETTEVILLE — For the second consecutive year, CBS will televise an Arkansas-Kentucky men’s basketball game during the 2022-23 season.

The Saturday, March 4 game between the Razorbacks and Wildcats, which is the regular-season finale for both teams, is set to tip off at 1 p.m. in Bud Walton Arena, according to the SEC’s TV schedule that was released Wednesday. It will be Arkansas’ only game on CBS in the upcoming conference season.

The Razorbacks and Wildcats have played on CBS 16 times since 1994-95. Arkansas defeated Kentucky 75-73 last season in Fayetteville behind 30 points and 8 assists from Razorbacks guard JD Notae.

An average of 2.36 million people watched the game, with a peak of 2.97 million. It was the third-most watched college basketball game on any network during the regular season.

Arkansas, which is expected to be ranked ahead of Eric Musselman’s fourth season, is scheduled to play 12 games on ESPN, ESPN2 or ESPNU, and five games on SEC Network.

Both matchups against Missouri, road trips to Auburn and South Carolina, and a home date with Georgia will air on SEC Network. Arkansas will begin SEC play at LSU with an 8 p.m. tipoff on either ESPN2 or ESPNU.

Other Saturday home games against Ole Miss, Mississippi State and Florida will tip off at 11 a.m., 5 p.m. and 1 p.m., respectively.

Five of the Razorbacks’ road games, including Auburn, Kentucky and Tennessee, will tip off at 8 p.m. Central. Arkansas’ game at Auburn is also set to begin at 7:30 p.m.

The Razorbacks’ Big 12/SEC Challenge matchup against Baylor will be played on ESPN, ESPN2 or ESPNU. A game time has not yet been set for the game in Waco, Texas.