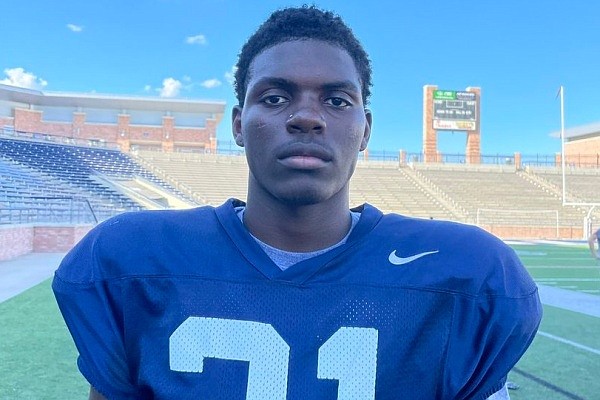 “We talk weekly, so everything is going good,” Mitchell said. “We have a pretty good relationship. I really like Arkansas. We talk about if I was to go there how he would use me.”

Arkansas would love to see him be a Razorback.

“They say they want me,” Mitchell said. “They’re one of my top schools.”

Mitchel, who has 8 catches for 163 yards and 2 touchdowns early in the season, visited Fayetteville on June 18 and for the Tailgate on the Hill on July 30. He said he will definitely visit for Arkansas' home game against Alabama on Oct. 1.

The Razorbacks' use of their tight ends and Coach Sam Pittman are other reasons he is high on Arkansas.

“I like the way they use the tight ends,” he said. “Staff is pretty cool. Coach Pittman told me how everything was going to be. He kept it 100 with me and didn’t try to sugarcoat anything. That’s what I really like about Arkansas.

"They have nice facilities and, hey, I just like Arkansas.”

His father Marko Mitchell played receiver at Nevada then for the Washington Redskins and Detroit Lions. He is currently the receivers coach at Allen.

“Not a better kid on the planet. He’s so young, but he just loves life, loves people,” Wiginton said. “He wants to please so bad and works incredibly hard. Phenomenal talent obviously, but really, really conscientious about pleasing, being right, but then really cares about his team and everyone around him.”

Mitchell said his father is also fond of the Razorbacks.

“He told me he really liked Arkansas, so I guess he’s on the same page as I am,” Mitchell said.

It’s early in the recruiting process and a time frame for Mitchell's college decision is fluid.

“Maybe next year or some time soon. I don’t know,” he said.