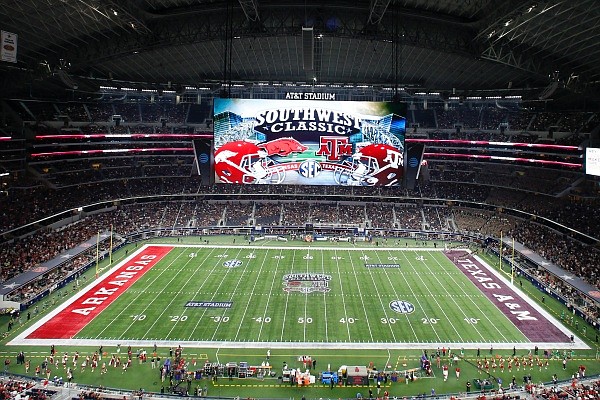 FAYETTEVILLE — The Southwest Classic series might have an expiration date on it after the 2024 game, but the head coaches on both sides of the rivalry talked up the attraction of the neutral site game at AT&T Stadium in Arlington, Texas, this week.

“Those games are electric,” University of Arkansas Coach Sam Pittman said in reference to big neutral site games. “You don’t normally walk into a stadium and it’s even-Steven fans wise.

“Hotels have similar number of occupants from both teams. It’s really cool. Being in Mr. [Jerry] Jones’ stadium is really neat. … There’s really something neat about that, there really is, when both fan [bases] meet in a town.”

Pittman has taken part in the Southwest Classic, the Red River Rivalry between Oklahoma and Texas in Dallas, and the annual Florida-Georgia game in Jacksonville, Fla.

Texas A&M has made it clear it would like the series to return to the campuses when the contract runs out in 2024.

The game has been played outside Arlington three times since both schools got together with Dallas Cowboys owner Jerry Jones to forge the series for the 2009 season.

Texas A&M officials wanted the game at home in their first year in the SEC in 2012 and the Razorbacks got a home game in compensation the following year. The 2020 game was played in College Station, Texas, because the SEC mandated home sites only during the covid-19 pandemic season.

“I love the home and home, but at the same time, I don’t mind playing it [in Arlington]. I really don’t,” Fisher said. “I think it’s good for our guys to get a neutral site game. It’s something different.

“A lot of them in this state dream of playing in that stadium because a lot of them want to play in state championship games.”

Fisher brought some humor into the discussion Monday.

“You hate to give up a home game, you hate to go on the road, but at the same time, those are neat things.”

Arkansas junior defensive back Myles Slusher practiced again Tuesday, this time without a green no-contact jersey like he wore Monday.

Slusher’s return should have a bearing on an Arkansas secondary that struggled to contain the pass the past two weeks with Slusher out and safety Jalen Catalon out for the season.

On Tuesday, Slusher lined up on the inside along with Simeon Blair and Jayden Johnson on the first unit during fastball starts, while Dwight McGlothern and Malik Chavis manned the cornerback spots. Chavis and Hudson Clark rotated at cornerback last week.

Defensive end Jashaud Stewart was in his red No. 58 jersey, indicating he should be good to go for Saturday after missing the 38-27 win over Missouri State due to an undisclosed issue.

Chris Paul and Jordan Crook took first-team reps with the defense during the fastball start, which has not been uncommon with veterans Bumper Pool and Drew Sanders sometimes held out of that drill.

The first offensive unit had limited success during the three plays of fastball starts. Raheim Sanders was stacked up running to the right on the first snap.

KJ Jefferson kept over the right side on the next play but lost the handle on the ball and the defense recovered. Jefferson wisely did not get down for the ball on the artificial turf with defensive players diving for it near his legs.

The junior quarterback is coming off the first two-turnover game of his college career. He had the ball clawed free and recovered by a linebacker in the first quarter, then had a pass tip off the hands of Trey Knox into a diving defenders arms for a third quarter interception.

Jefferson completed a pass to Knox on the right edge on the third play of fastballs.

Quincey McAdoo’s good hands catch on a slightly high slant pass from Malik Hornsby highlighted the second unit’s efforts. AJ Green had a between-the-tackles carry and Hornsby kept the ball on the left edge on the first and third snaps.

Coach Sam Pittman said receiver Matt Landers took his dropped pass against South Carolina two weeks ago pretty hard, struggling to get it out of his head. The deep ball was beyond the Gamecocks defenders near the sideline and it could have gone for a touchdown if he had stayed in bounds.

“It was really just letting it go, moving forward, putting it in my mind it won’t be the last opportunity I get,” Landers said was his approach to turning the page.

Landers got plenty of opportunities last week, catching seven passes out of eight targets for 123 yards, his first 100-yard game as a Razorback.

“Really just playing our brand of football, doing what I do,” Landers said triggered the big game. “Just whatever the coach called in, just getting open and doing my best to get open.”

Jordyn Adams, the son of Arkansas defensive line coach Deke Adams, hit an opposite field home run Monday for the Rocket City Trash Pandas, the Class AA minor-league affiliate of the Los Angeles Angles, and it made his papa proud.

Deke Adams re-posted a short video of the opposite-field blast on social media and borrowed a tag line from Sam Pittman to describe it: “Yesssirrrr! “ while also tagging his son’s Twitter handle.

Arkansas special teams coordinator Scott Fountain and Texas A&M Coach Jimbo Fisher were on the same team at Samford in 1987.

Samford, a Christian school based in Birmingham, Ala., competes in the Southern Conference on the FCS level.

• Sam Pittman is the first Arkansas coach since Lou Holtz in 1977-78 to win his first seven games against non-conference opponents. Pittman’s list includes some powerful names, including Penn State in the Outback Bowl and No. 23 Cincinnati in this year’s opener.

• Saturday’s attendance of 74,133 marked the highest in Arkansas history against an FCS opponent.