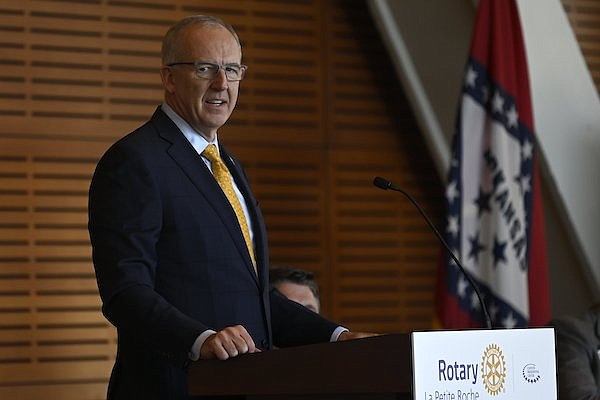 SEC commissioner Greg Sankey speaks to member of the Rotary Club of Little Rock on Tuesday, Sept. 20, 2022, at the Clinton Center in Little Rock.

LITTLE ROCK — SEC Commissioner Greg Sankey remembered vividly his first trip to the University of Arkansas in 1989 when he was serving as an intern at Northwestern (La.) State and traveling through Fayetteville. But even then, he had an hunch that big changes could potentially be in store for the state’s flagship program.

Turns out, he was right.

Sankey spoke about that visit and much more Tuesday afternoon at the Rotary Club of Little Rock’s Club 99 luncheon at the Clinton Presidential Library.

“Northwestern State was playing in Springfield, Missouri, against Southwest Missouri State, as it was known,” Sankey recalled when talking about his initial foray to Arkansas. “We drove through [Arkansas], stopped actually for dinner in Fayetteville, toured the stadium, saw the campus. It was not an SEC campus at the time because they were a member of the Southwest Conference.”

But now, the Razorbacks are a full-fledged member of the SEC, and according to Sankey, flourishing, particularly under Arkansas Athletic Director Hunter Yurachek.

The 53-year-old Yurachek came to the university in 2017 to replace Jeff Long following a nearly three-year stint as Houston’s vice president of athletics. Since his arrival, the Razorbacks’ athletic program has made deep postseason runs in several sports and is garnering notoriety nationwide, particularly in football, baseball, softball, basketball, track and field and soccer.

Yurachek, who spoke at the Little Rock Touchdown Club’s luncheon Monday and was presented with a special award Tuesday, credited the state’s fan support as one of the biggest reasons the program is doing as well as it is. To drive home that point, he pointed out that Reynolds Razorback Stadium is sold out, for the most part, for the rest of the football season, Walton Arena season tickets are sold out for men’s basketball and Baum-Walker Stadium will subsequently sell out for baseball. But those weren’t the only sports that are drawing huge crowds — figures that sparked national recognition at the time.

There were more than 10,000 fans at Walton Arena during an Arkansas gymnastics meet against Auburn in January and regional and super-regional tournaments were sold out for the Razorbacks’ softball team in the spring.

“It’s really a remarkable story to see the success across the board,” Sankey said. “I was tracking Hunter’s presentation on attendance, and I’ll tell what was really remarkable last year was the soccer tournament when [Arkansas] hosted Notre Dame. There wasn’t a place to breathe, much less to sit.”

There was also a sizeable crowd on hand to hear Sankey, who’s been the SEC’s commissioner since 2015 and is considered at the top of the country’s conference leaders.

The New York native hit on a number of different topics Tuesday, from the growth of the College Football Playoff, which is set to expand from four teams to 12 teams in 2026 but has the possibility to move into place as early as 2024, to the SEC’s new media contract with ESPN and ABC.

But there was one particular matter that piqued the interest of the majority of those in attendance for the event, and it centered on the SEC’s two newest members.

Texas and Oklahoma are set to join the league in 2025, and Sankey revealed that he routinely fields questions on whether or not the two storied schools could enter the conference earlier.

Inevitably, scheduling and formats within the conference may change once the two teams join. In addition, other conferences are expected to increase team membership as well, which could trickle down to how nonconference slates are set up.

All of those decisions are yet to be determined, but much like Sankey’s first trip to the Natural State 33 years ago, he anticipates there will be big changes coming.

“There’s a lot to do to make those things happen,” he said. “There are a lot of logistics involved. … never going to be the way that is was, it doesn’t have to be the way that it is, but moving forward with collaboration, thinking and problem solving has helped us become the strongest conference in college athletics.”